The growing popularity of Tequila has attracted support from stars such as Rita Ora and Dwayne ‘The Rock’ Johnson. We round up the famous faces who have made their mark on the agave-based spirits scene.

Tequila has become a category awash with celebrity associations – Chris Noth, Dwayne ‘The Rock’ Johnson and Justin Timberlake all own significant stakes in Tequila brands.

Celebrity-backed Tequilas have also attracted the attention of a number of a major players. In 2017, George Clooney’s Casamigos Tequila was bought by Diageo in a deal worth up to US$1 billion and the UK drinks giant also entered into a joint venture with music mogul Sean ‘Diddy’ Combs to acquire Deleón Tequila. Meanwhile, Beam took a significant stake in Timberlake’s Tequila brand in 2014.

Other notable omissions to our list include Elon Musk’s rumoured move to register a trademark for the ‘Teslaquila’ brand name, and heavy metal band Rammstein’s eponymous Tequila brand.

Click through the following pages to see our pick of 10 celebrities who are making a name for themselves in Tequila. 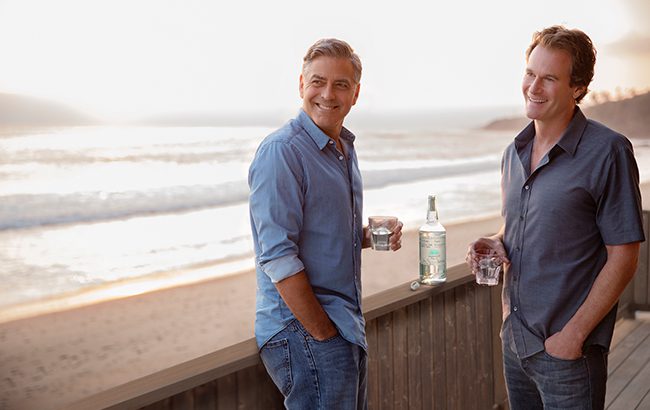 Actor George Clooney co-founded Casamigos Tequila in 2013 with Rande Gerber and Mike Meldman. The brand is now said to be the fastest-growing super-premium Tequila in the US.

Diageo snapped up Casamigos in August 2017 for an upfront fee of US$700 million, with a further US$300m on the table depending on the brand’s performance over the next decade.

In February 2018, Casamigos extended its range with the launch of a mezcal made from 100% espadin agave.

The brainchild of film star and former wrestler Dwayne ‘The Rock’ Johnson (pictured centre), Teremana Tequila is set to launch next month. Johnson has had his Tequila plans in the works since 2018 and has built excitement for the brand through various teasers across social media – including this Instagram snap of its bottle design.

Set to initially launch in Mexico, the US and Canada, the Teremana range will comprise two expressions: Teremana Blanco and Teremana Reposado. 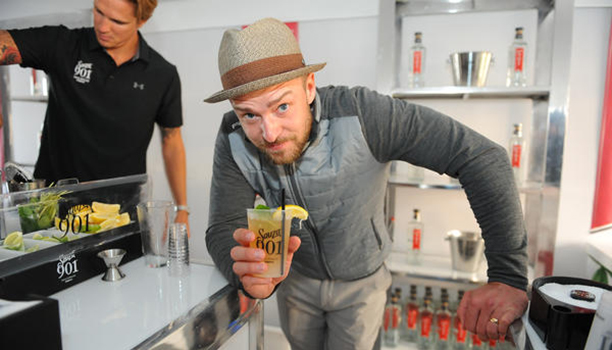 Singer and actor Timberlake has fronted a number of campaigns for the brand, including a video where he sported a head-to-toe green lime costume. 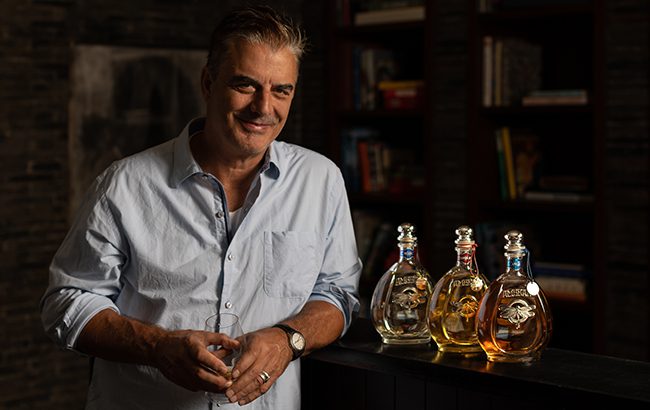 Sex and the City star Chris Noth also delved into the world of Tequila with the purchase of a majority stake in Ambhar Tequila in August 2018.

The Ambhar Tequila range consists of Plata, Reposado, and Añejo expressions, and is made in small batches from 100% Blue Agave.

American actor Noth is involved in the company’s “creative direction” and will work with the co-founders on “strategic business decisions”.

“As an entrepreneur and co-owner of The Cutting Room in New York City, I’m pretty well versed in spirits, and I have to admit that Ambhar is the first Tequila I’ve been excited about drinking by itself,” Noth said at the time. 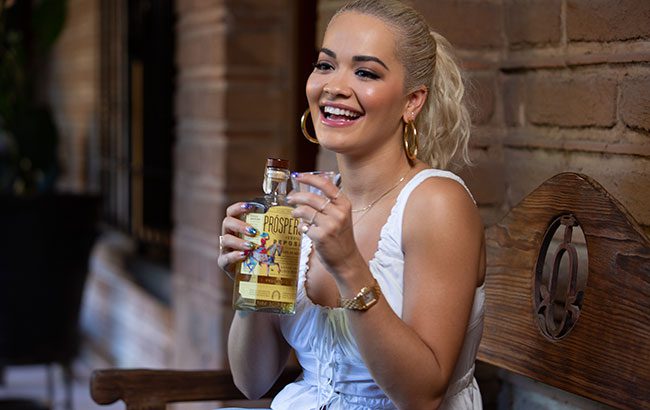 The only female to make our list is English singer-songwriter Rita Ora, who moved into Tequila after joining forces with spirits marketing firm Conecuh Brands to launch Próspero 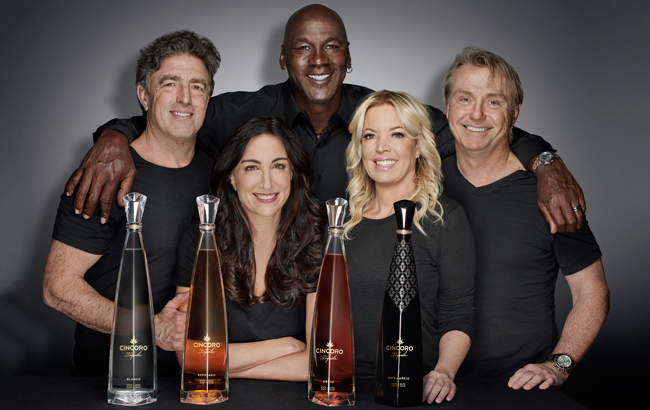 Former professional basketball player Jordan partnered with Jeanie Buss of the Los Angeles Lakers, Wes Edens of the Milwaukee Bucks, and Emilia Fazzalari and Wyc Grousbeck of the Boston Celtics to develop the new Cincoro brand.

Distilled from 100% Blue Weber agave, Cincoro Tequila will launch blanco, reposado, añejo and extra añejo expressions. It will be rolled out worldwide in 2020. 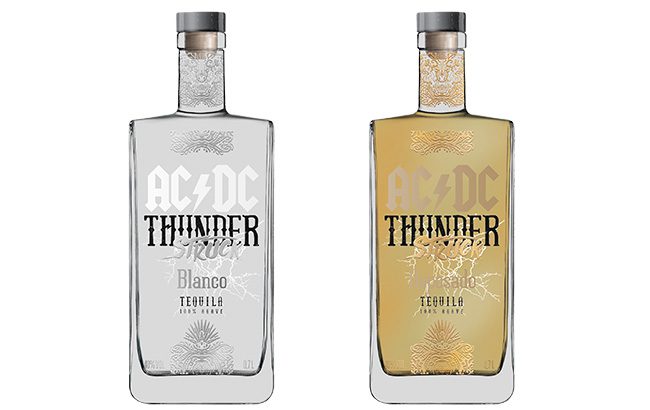 The launch marked AC/DC’s first foray into spirits, having previously released Rock or Bust beer, Hells Bells and Back in Black wine, and a Bourbon and cola ready-to-drink (RTD). The Fabrica de Tequilas Finos distillery is owned by Amber Beverage Group (ABG).

Available in Silver, Reposado and Añejo varieties, Thunderstruck Tequila is made from organically-produced 100% Blue Weber agave at Fabrica de Tequilas Finos’ distillery in the town of Tequila, Mexico. 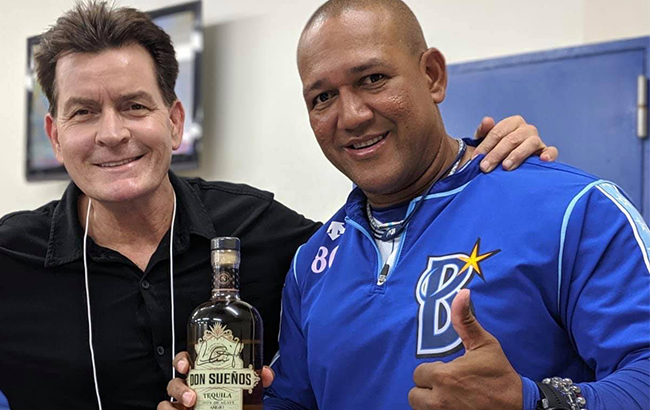 Two and a Half Men star Sheen (pictured left) signed on as co-owner of the Tequila company, which launched in early 2017. The American actor is co-owner alongside Kumiko Zimmerman, who has run Don Sueños since its launch – making it the “first” Tequila brand owned and operated by a Japanese woman. 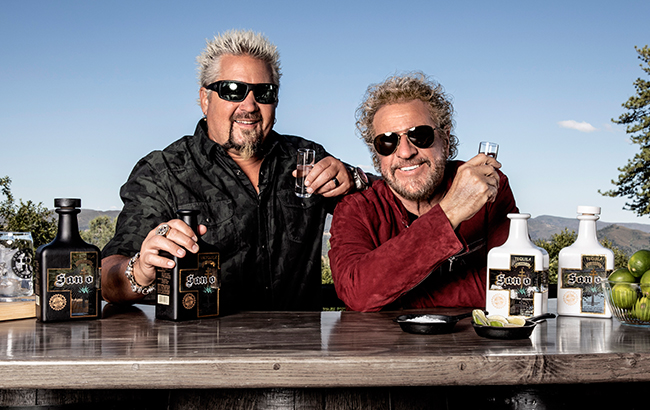 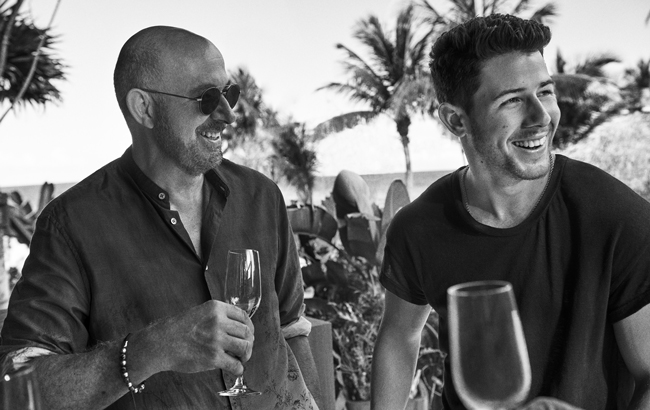 In August 2019, singer-songwriter Nick Jonas (pictured right) and US designer John Varvatos (pictured left) joined the agave spirits industry with the launch of Villa One Tequila.