The lack of any real rules or regulations in the hard seltzer sector allows producers to let their creativity run wild, with impressive results, as discovered in this year’s blind tasting of what the industry has to offer.

Confidence in the future success of the hard seltzer market is high. Looking at the industry, all the signs indicate a prosperous future for this trendy tipple. The big players have been betting on the category’s lucrative future, and in January, Beam Suntory took a stake in Flying Embers, a hard seltzer and hard kombucha brand from California, US.

Analysts also predict optimistic times ahead for hard seltzers. The global hard seltzer market is expected to be worth US$49.4 billion by 2028, driven by demand for lower-ABV drinks, according to analysis firm Grand View Research. The US company believes the hard seltzer market will increase by a compound annual growth rate (CAGR) of 31.4% from 2021 to 2028 – that’s up from a value of US$5.6bn in 2020, according to Grand View Research.

As any serious spirit producer will know, a product’s longevity is intricately tied to the quality of the liquid inside the bottle – or in the case of The Hard Seltzer Masters, the can. A panel of expert judges assembled at the Ibis hotel in London Bridge, UK, last month to see what was on offer in the hard seltzer sector, and if producers are living up to the hype. Each entry was packed and shipped by Sensible to ensure all entries were tasted completely blind.

A second team of judges, chaired by Bernadette Pamplin, freelance spirits writer and founder of the Under the Ginfluence blog, included: Evan Prousaefs, bar manager and assistant general manager of the Los Mochis restaurant in Notting Hill; and Alan Uresti, head of agave spirits at Annabel’s in London.

The third panel was chaired by David T Smith, spirits consultant, writer and co-founder of the Craft Distilling Expo; and featured Dimple Athavia, founder of All Things Drinks; Sara Jane Davis, freelance spirits writer and founder of Negroni Club UK; and Christine Perrett, director of A Twist of Citrus, and The Spirits Hub.

All three panels shared the opening flight: Spirit-Based Hard Seltzers. This was by far the biggest round of the competition – and the seven Master medals left a lasting impression on the judges.

Say Vodka Seltzer Grapefruit-Lemon secured the top award for its “lovely bright nose” full of “grapefruit and lemon”. Pamplin added: “The tartness of these flavours is captured really nicely on the palate before it turns slightly sweet, which gives a really nice weight to the drink.”

Yan Tan Damson & Rhubarb Hard Seltzer was awarded a Master medal after delivering flavours of “sweet stone fruits, and a touch of rhubarb spice”. Fellow Master medallist Mike’s Hard Seltzer Raspberry had “lush raspberry tartness” on the nose, which “carried throughout the journey onto the finish, leaving a nice round note”.

Pals Vodka, Central Otago, Peach, Passionfruit and Soda also bagged the top award. The Master medallist impressed with its “tart passion fruit and juicy, fresh peach” on the palate, and ability to ensure the overall product was “not too sweet, perfectly balanced”.

Completing the Master medal haul was High Water Mango and Peach. The hard seltzer showcased its “juicy, bold mango aroma” with “tinned peaches”. “Good carbonation and lovely juicy mango and peach flavours,” noted Kiely. “This would be a real crowd-pleaser – delicious and fruity.”

No fewer than 19 Gold medallists gave the opening round a boost. Among the award winners was “really refreshing and tasty” Féfé Cucumber and Eucalyptus. The French hard seltzer had a “fresh, vibrant aroma” with “punchy flavours on the palate – cucumber is fresh and the eucalyptus balances well”.

Allendale Brew Company bagged four Gold medals in this flight, including one for “bold, fruity” Ride Mango and Passionfruit, which impressed with “definite mango and passionfruit character”.

Bad Water picked up two Gold medals, one for Pink Grapefruit & Yuzu, and another for Cherries & Berries. A “zesty grapefruit aroma and pith bitterness on the palate” was a winning combination for the first variant. The second, meanwhile, had a “lovely fruitiness” on the palate and managed to avoid being “overly sweet – this had good balance”.

The first heat concluded with 17 Silver medals being awarded.

Wrelton described the round as “quite a seasonal category”, noting the vast assortment of fruity flavours sampled.

Dixon noted: “It’s interesting to see the wide range of flavours and experimentation that producers are going into. Flavour combinations seemed quite creative, innovative and imaginative. It’s great to see so much experimentation from a relatively young category.”

The judges’ attention then turned to a flight of Brewed expressions. Standing out from the crowd was Fellr Passionfruit, which was deemed deserving of a Master award. Tasting notes included “lovely passionfruit with some tannic tea notes – very inviting”.

Davis was left pleasantly surprised by the round: “It was really interesting to see such exciting flavour combinations elevated through the production method. I was surprised at how much I enjoyed this flight.”

Three Master medallists were celebrated in the following Fermented flight. Young Heart Seltzer – Green Tea & Muscat Grape nabbed the top award for presenting “tannins from the green tea and some meadow florals” on the nose, leading to “hints of sweetness from the grape” when sipped.

The remaining two Master awards in this round went to Two Brooks. The producer’s Lime Cooler collected a Master medal for “doing exactly what it says”, with “a lovely zesty lime palate that lingers, with good carbonation”. Stablemate Two Brooks Mango Hi Ball bagged a Master for its “tropical and refreshing” qualities, with “forward and well-balanced mango”.

Seven Gold medallists elevated the flight further, including a double-Gold win by French firm Pernod Ricard. The producer’s Bewiz – Lemon Ginger Grapefruit can was found deserving of a Gold, with each named flavour “complementing the others well and harmoniously”. Gold-winning Bewiz – Raspberry Hibiscus Lime had an aroma likened to a “roly-poly pudding”, the palate balancing “raspberry cordial and citrus”.

Dixon said about the flight: “The Fermented flight brought a different aspect to the style of hard seltzers, with great balance and mouthfeel across many of the entries.” 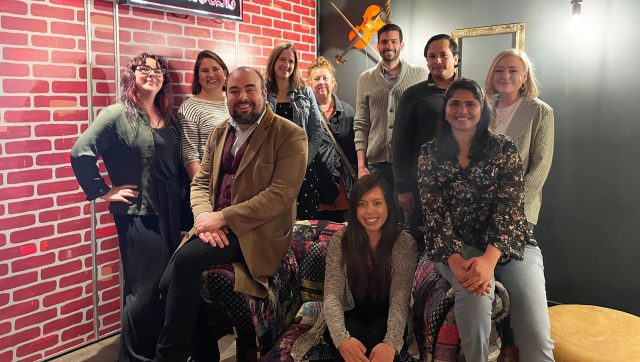 The judges then proceeded to the Malted round, where three Gold-worthy entries were enjoyed. AB InBev collected two Gold medals in this round. One was awarded to Bud Light Seltzer Strawberry, which delivered “jammy strawberry flavours” on the palate. Bud Light Seltzer Passion Fruit also won Gold, hailed for its “good carbonation and fruitiness on the palate”.

Club Local Cocktails and Spirits secured a Gold medal for Shape Mango/Tea. The entry impressed with its “well-executed” flavours, which were “fresh, with good carbonation”. The judges agreed they “would happily drink this”. Two Silver medals brought the round to a close, including Fellr Watermelon Margarita and AB InBev’s Bud Light Seltzer, Lemon Lime.

The penultimate Flavoured – Other flight delivered a selection of awards, with a Master given to Adán & Eva Hard Seltzer Coconut Lemon. Uresti said: “This was an excellent product, with great flavours coming through.” Tasting notes included “vibrant coconut on the nose and expressive flavours on the palate”, with a “very long aftertaste”.

The initial tasting concluded with a flight of Infused hard seltzers, with a Gold award given to Natz Ginger Crush. The expression was described as “dry and very gingery”. Natz Fresh Lemon secured a Silver medal.

The tasting then turned back to the Master entries awarded throughout the day to determine the best in class. Among the high-calibre of hard seltzers sampled, the judges voted in favour of Young Heart Seltzer – Green Tea & Muscat Grape, from the Fermented flight, being The Hard Seltzer Taste Master 2022.

“Fermented was probably the most interesting flight of the day for me,” said Miller. “It was a very strong flight, with more variety than I would have given credit for.”

Dixon also agreed that there was great diversity to be found in the category, indicating a bright future ahead. “There’s a lot more to hard seltzers than meets the eye,” he said. “The absence of any real rules, regulations and parameters is allowing producers to be creative and cater for different tastes with different styles. The category is still at a young stage and finding its feet, but there’s plenty of quality already on the market.”