How long can the UK retail boom last?

The spirits industry in the UK was hard hit by on-trade closures, but home drinkers came to its rescue. Now brands are determined to keep these new retail converts onside as bars and restaurants open up again.

A global pandemic has done little to dampen UK consumers’ thirst for spirits; indeed, since Covid‐19 reached the country, the category’s retail sales have soared.

When the on‐trade was ordered to close last year, ‘hometainment’ became the dominant mode of consuming alcohol, leading to the creation of a nation of amateur bartenders. With fewer options to socialise and travel, consumers were looking to treat themselves with affordable luxuries, and switch off from home working. This allowed the retail environment for spirits to thrive.

According to Kantar’s latest data set, growth has continued even as lockdown restrictions have lifted. Off‐trade spirits sales grew by almost 30% between the end of December and the start of November 2021, outperforming wine and cider, but marginally tailing beer and RTDs. However, the spirits segment grew its shopper base more than any other beer, wine and spirits (BWS) category, attracting 1.1 million shoppers.

For many years, wine has had the lion’s share of BWS in the UK grocery channel. This remains the case, but over the course of the pandemic, some of wine’s value has transferred into spirits and beer. Kantar figures put wine’s BWS market share at 36%, but this has declined by 1.4 percentage points since the end of 2019. At the same time, spirits’ share has grown by 0.7 percentage points to 30%, and beer’s share has increased by 0.9 percentage points to 19.3%.

Richard Lee, strategic insights director and head of alcohol at Kantar, claims the category’s versatility has been key to spirits’ growth in the UK off‐trade. “The flavour boom has been spreading through various sub‐categories, from vodka to gin and rum and whisky. It seems there’s a spirits profile for any taste, and that’s been a big driver of recruitment into the spirits category.”

As well as product innovation, which has remained a priority for suppliers in the past 20 months, brands have also focused on expanding their consumption occasions by promoting new serves. “The positioning of different brands for different moments of the day – such as the apéritif moment, which fits with our increasingly working‐from‐home lifestyle – has a big part to play,” adds Lee.

Likewise, John Vine, spirits buyer at Waitrose, notes that shoppers are becoming more aware of the versatility of spirits, allowing the category to play in the occasions that might have otherwise been reserved for wine. “People are realising you can have a 40% ABV spirit but have it in a long refreshing drink, bigger than a glass of wine but a lower ABV,” he says. “Vermouth and tonic, G&T, whisky highball – they have all started to get more momentum as people want to create a longer serve, and still keep an eye on their health and wellbeing.” 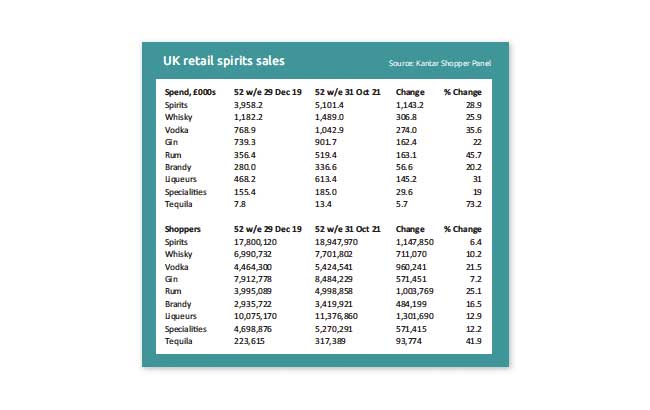 In terms of spirits sub‐categories, it seems the pandemic has hastened a change of fortune. At Waitrose, for instance, sales of Tequila have grown by more than 133% over the past two years as shoppers sought to recreate the Margaritas and Palomas that they would normally enjoy in bars at home.

Meanwhile, the various sub‐segments of rum grew between 46% and 58%, and cream liqueurs grew by 71% as shoppers sought out indulgent, though not bank‐breaking, treats.

On the flipside, Waitrose’s single malt whisky offering struggled last year because the category was not able to effectively capitalise on the key Father’s Day and Christmas gifting occasions. Despite witnessing double‐digit growth over the past two years, year‐to‐date sales of traditional gin have declined by 8%, while flavoured gin was up by nearly 5%.

At a total grocery level, gin and whisky are the weaker spirits performers. Kantar’s Lee notes that while “all spirits sub‐categories continue to perform strongly” there are “winners, and winners who are winning less strongly”.

Nationally, Tequila is growing at 73%, while rum is rising at almost 45%. Gin is registering the slowest progress at 22%, and whisky is growing at 26%, both of which are behind the spirits average.

“This means we are seeing a bit of a slowdown versus some really strong growth rates over the past few years for gin, and perhaps shopper interest starting to sway to other categories,” says Lee.

To better respond to new category hierarchies, next year Waitrose is changing its sequencing strategy. Vine explains that previously, the supermarket would operate a “one in, one out” system, replacing one spirit with another from the same category. However, “this affects our ability to give lines that have grown massively more space”, he says. As such, from 2022, Waitrose will enact fewer sequencing changes, but when they are made, these changes will be bigger, “rewarding high‐growth categories, like Tequila or rum” with more space.

For suppliers, it has been important to offer more support to retailers during the pandemic, allowing them to respond to rapid changes in the market. Pernod Ricard UK, for instance, has been working with field sales agency McCurrach to help retailers “act fast to retain these new shoppers and [ensure] that the right products are available based on emerging consumer trends”, says commercial director Ian Peart.

He adds: “Buyers are having to navigate multiple market issues, such as supply challenges causing last‐minute promotional changes, and until recently, working only virtually. We have been able to add value by proactively sharing category advice and insight buyers may not have had the time to ask for, which has helped boost performance and create a shopper‐centric range.”

In Pernod Ricard UK’s own range, Peart highlights the “exceptional” off‐trade performances of Malibu Coconut, Kahlúa and Absolut Vanilla, as well as flavoured line extensions from Beefeater, Havana Club and Jameson. “Categories gaining share of total spirits are either heavily linked to cocktails or are flavoured,” says Peart.

Much has been said of the astronomical growth of alcohol e‐commerce since the start of the pandemic, a trend that has not gone unnoticed by Pernod Ricard, which in its latest fiscal year registered a 74.1% increase in spirits e‐commerce. As has been the case for many others, the pandemic sharpened the global group’s focus on digital sales, and in September this year it reached an agreement to acquire specialist online retailer The Whisky Exchange, including its three London shops.

Wine sales on the rise

Dawn Davies, head buyer at The Whisky Exchange, notes the company’s growth has continued through the second half of 2021, albeit at a slower rate compared with earlier in the pandemic. In particular, The Whisky Exchange has experienced a “huge increase in wine sales”, and, as such, has doubled the size of its wine range.

“The consumer has become more informed and more discerning; they are less brand‐led and more willing to experiment,” says Davies.

“For a buyer like me this is music to my ears as it allows me to diversify the range and bring new and exciting brands to the market. Wine has become more important to us as the customer who wants good spirits will also want good wine, so why not talk to them about both? This is potentially a really exciting time for us as we have more scope to play with.”

Both pure‐play e‐commerce platforms and omni-channel retailers are aiming to further evolve the digital sphere by creating more interactive and informative spaces for spirits consumers to search, learn and, ultimately, buy. “The thing bricks and mortar has always had over e‐commerce is experience and personality,” says Davies. “As a company we will continue to drive that experience and content online as it is vital to the future of those that will be the leaders in e‐commerce.”

Waitrose’s John Vine claims the supermarket’s webinar events have continued to gain momentum despite the lifting of lockdown restrictions. Going forward, the retailer will be “looking at how we can evolve the online platform, how we can have more editorial and creative content”, says Vine.

“It’s becoming more of an educational piece rather than just somewhere you can go and buy a bottle of whisky.”

In the shorter term, there are more immediate pressures for retailers to weather. Davies describes the many logistical challenges arising from both the pandemic and Brexit as a “nightmare” for retailers. “We have seen price rises across the board – from the costs to import due to taxes, lack of transport, to the cost of goods and of course increases due to lack of staffing out there,” she adds.

“The government needs to start doing something fast. We need support as it is not going to get better quickly. I predict there will be big price increases over the next year or so as it is not looking like it will get easier.”

James Hayman, co‐owner of London gin Hayman’s, also highlights supply‐chain challenges and “unprecedented” price increases. “The supply chain issues and subsequent cost increases, as well as labour shortages across the board, are as challenging, if not more challenging, than the original lockdown,” he says.

At Pernod Ricard UK, heightened consumer demand, disrupted international sea freight, port congestion, shortages of raw materials, and a lack of delivery drivers in the UK and EU are unsurprisingly causing logistical challenges. “The environment will remain challenging for the foreseeable future, and we have already taken several actions to adapt our logistics capacity, such as scaling up production, alternative sourcing, and better agility and communication,” says Peart.

The recent duty freeze on spirits was therefore welcome news for both suppliers and retailers, though there is some uncertainty in the trade over the government’s plans to overhaul the duty system for alcohol. Simplification is needed, they say, but there is a risk the current proposals will put higher strength product at a competitive disadvantage.

The UK spirits off‐trade has a broadly positive outlook thanks to beneficial changes to shopper behaviour arising from the pandemic that are set to last in the longer term. There will be, however, near‐term choppy waters for retailers and suppliers to navigate, with inflation and supply challenges muddying an otherwise rosy picture.