American whiskey brands to watch in 2022

Though tariffs have taken their toll on American whiskey, the category is on the mend. We name the brands that are bound to do big things in 2022.

The American whiskey category has had a tumultuous few years as punitive tariffs dragged on its sales.

In 2018, former US president Donald Trump imposed a 25% tariff on steel, and 10% on aluminium from the European Union (EU).

In retaliation, the EU implemented a 25% tariff on American whiskey and other goods, amounting to €2.8 billion (US$3.3bn) worth of products.

But in November 2020 distillers were given some good news when the US and EU established a new trade agreement. The move means the tariffs will be dropped in January 2022.

Greg Mefford, international sales director at Luxco, producer of American whiskey brands such as Ezra Brooks and Rebel, says: “It’s a category defined by optimism. There’s been lots of resilience, growth and innovation, and there’s a bright future ahead following the end of EU tariffs. Lower retail prices that aren’t swelled by duties will encourage sales among existing American whiskey fans, while removing a barrier to entry for those new to the category. This will really help drive growth in the EU – a huge market for the category – as consumers are able to afford to trade up to more premium Bourbons and ryes, while volume sales of more standard SKUs will also benefit from the end of tariffs.”

Meanwhile, The Kentucky Distillers’ Association (KDA) is calling for an end to ‘discriminatory’ taxes on barrels in the state.

It says Kentucky distillers are expected to pay a record US$33 million in ageing‐barrel taxes in 2021. The state is said to be the only place in the world that taxes ageing barrels of spirits as part of the production process. This hinders growth and jeopardises Kentucky’s ability to gain new distillers, firms argue.

But there is still some positive growth in the category, despite tariffs and the Covid‐19 pandemic. Volumes of US whiskey were up by 7% to 28.4 million cases in 2020, and value rose by 8.2% to US$4.3 billion, according to the Distilled Spirits Council of the US.

Craig Johnson, vice‐president of marketing for Scotch, American whiskey and Tequila at Pernod Ricard USA, says: “American whiskey continues to grow at 1.15x the market, accounting for 21% of spirits in the US, with the premium end of the category accounting for 42% of the growth (Nielsen 2021) – guiding Pernod Ricard towards its portfolio of super‐ and ultra‐premium brands to attract a wide variety of consumers.”

Johnson notes the category is “undergoing a renaissance” as consumers discover its quality and versatility. He adds: “A broader consumer base has provided tremendous opportunity for innovation, which will continue to drive the category.”

As for trends in the category, Mefford notes consumers have become “more interested in age‐statement Bourbons, innovative and well‐balanced blends, and secondary finishing”.

Furthermore, a new rule that will deliver a legal definition for American single malt whiskey is due to be published by the end of this year, according to the American Single Malt Whiskey Commission.

Continue reading for our pick of the American whiskey brands to watch in 2022.

For more brands to watch, check out our Scotch whisky and vodka picks. 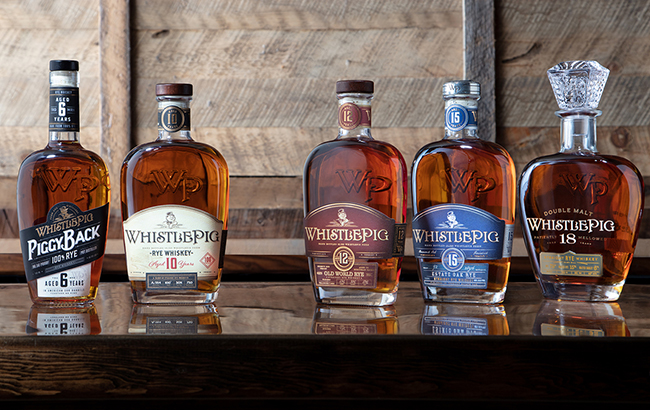 LVMH took a minority stake in the rye whiskey producer at the end of 2019, a move that will help to boost the brand’s presence around the world. There’s also been plenty of innovation from the brand in unusual cask finishes.

The Brown‐Forman‐owned Bourbon brand exceeded one million cases in 2019, and has continued to grow by double digits every quarter. Brown‐Forman is also planning to expand the distillery to double production – work is due to be finished next summer. Furthermore, it recently increased its ad spend on Woodford Reserve in Q1.

The celebrity‐founded Bourbon achieved the speediest pre‐sales in the history of Reserve Bar, and already has an impressive social media following. Plus, its owners are hoping to expand into new markets, ramp up production, and introduce new expressions next year.