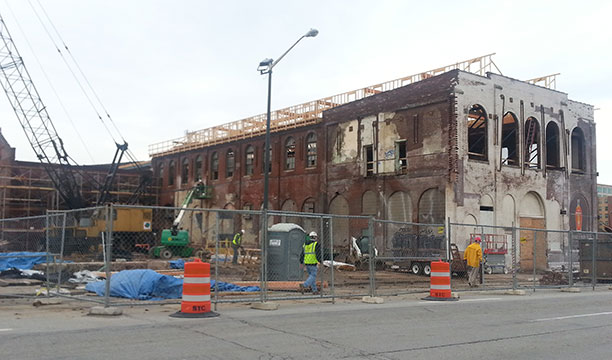 Work is underway in earnest at the new Angel’s Envy Distillery in downtown Louisville, Kentucky. While the US$12 million project was announced in July 2013, work is still in the early stages judging by this picture and has already well surpassed the original completion date of December 2014. Now the brand has been acquired by Bacardi, its expected construction will speed along. 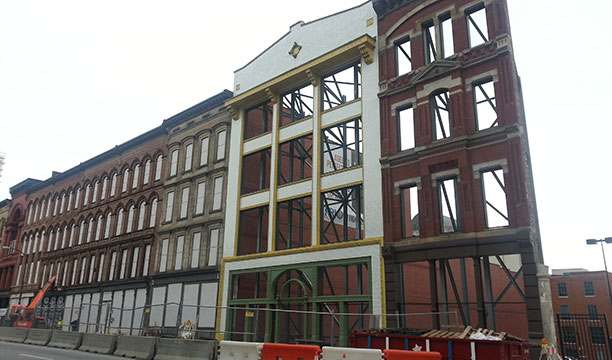 Also on Louisville’s Main Street is this row of boarded-up buildings with adjoining facade. The entire row is dedicated to the new Old Forester Distillery, a US$30m project will bring Brown-Forman back to the original buildings it occupied in 1900-19. The new Old Forester Distillery, which will feature fermentation tanks, stills, a bottling hall and a cooperage, is expected to be up and running by autumn 2016 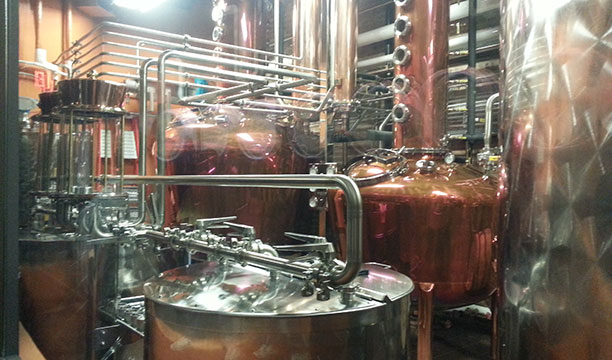 Further along Main Street is Heaven Hill’s new Evan Williams Experience that opened last year – a three-storey education centre designed to give whiskey tourists a taste of the company’s brands without the schlep out to Bardstown. Also onsite is this mini, modern experimental distillery that at the time of SB’s visit, was busy creating a wheated Bourbon. 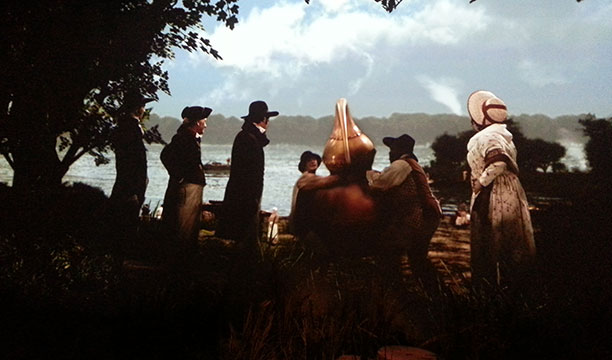 As part of the Evan Williams experience, visitors are given a sneak peek at the brand’s roots in colonial America, with a reconstruction of the first stills to be built and run by Evan Williams himself. 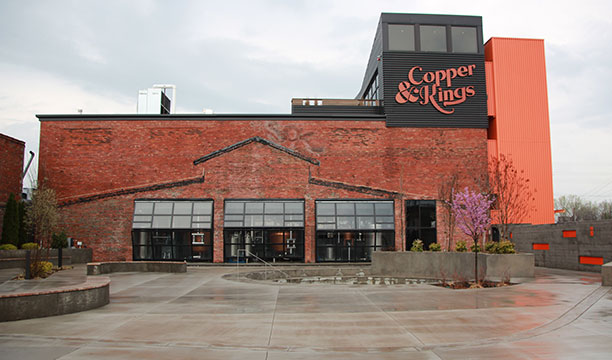 Further out of town is the majestic and eye-catching Copper & Kings Distillery. While the rest of the state is busy distilling and maturing Bourbon and American whiskey, Joe Heron is producing the next big US spirit – American brandy. You can still see the outline of the old warehouse that adjoined the distillery. It was torn down prior to Peron’s acquisition of the site, and in its place is a vast courtyard that hosts numerous events and even weddings. 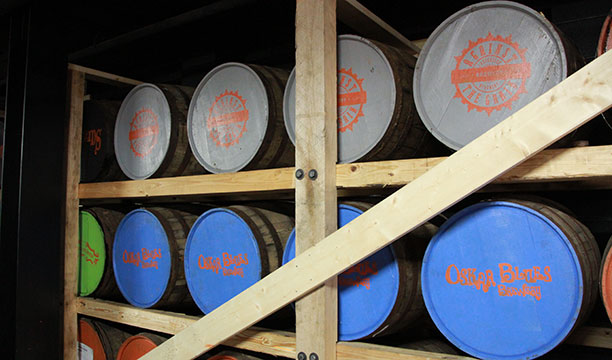 The most unique and perhaps innovative characteristic of Copper & Kings is its use of heavy metal music to help speed along the maturation of its brandy and absinthe. Music is blasted out of speakers situated around the underground warehouse to agitate the liquid inside the barrels, encouraging interaction with the wood. 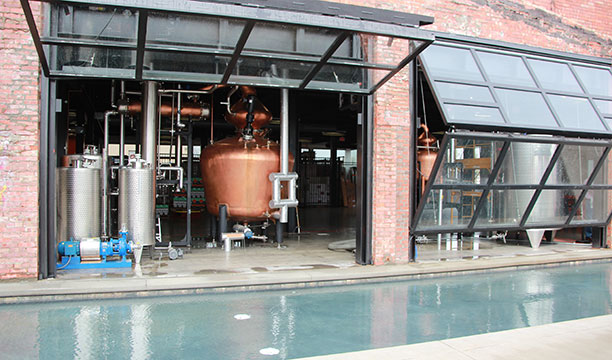 The still room itself features these sliding windows that are accidentally reminiscent of the style found at Scotch whisky distilleries built in the 1960s. The windows are designed to cool the still room, while the pool infront is both a regulatory and design feature, preventing curious visitors from reaching out to touch the hot stills. 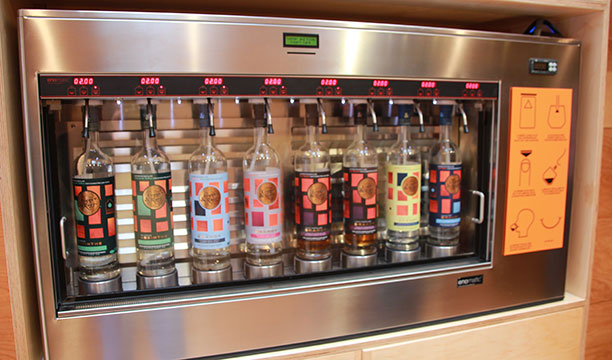 Copper & Kings ensures its range is available for all visitors to taste, and has employed an enomatic machine, normally reserved for high-end wine bars, to give visitors a sample of its American brandy and absinthe. 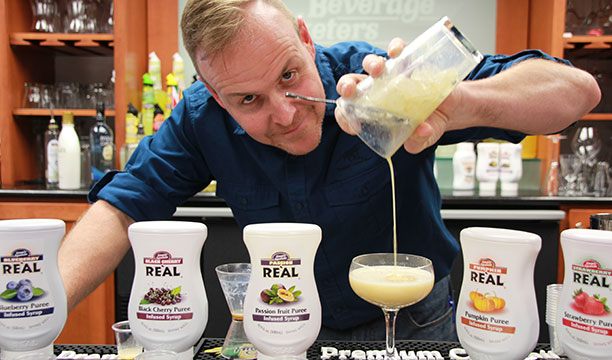 Over the bridge north out of Louisville you head into Indiana and across to the largest supplier of cocktail mixers and syrups, American Beverage Marketers. At its facility in New Albany, ABM’s director of beverage applications, Dean Serneels, demonstrates the versatile use of the Re’al cocktail syrups and Finest Call mixers ranges. 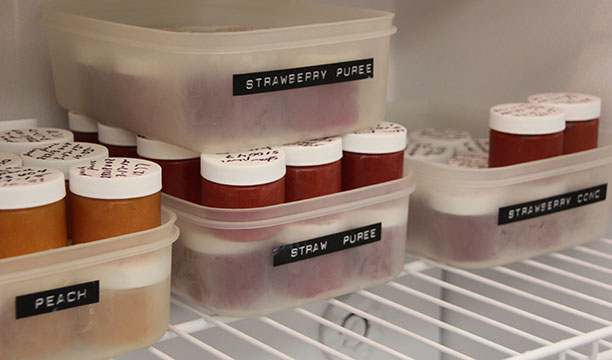 On a tour of the facility SB discovered the lengths ABM goes to ensure every batch that leaves its warehouses is up to its high standards. These vials contain samples of the most recent batches of its fruit purees that are being tested for consistency and quality. 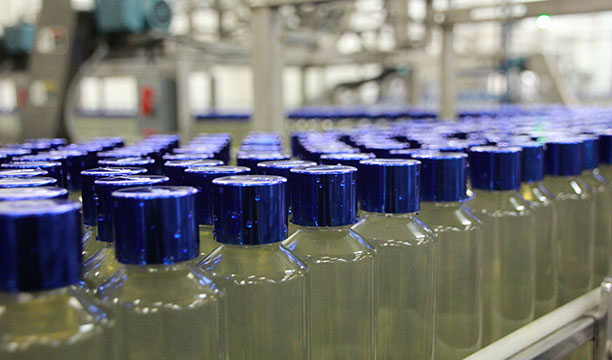 Out in ABM’s vast bottling hall was a line of one of the group’s most popular expressions ready for labelling – Cocktail Essentials’ Simple Syrup. 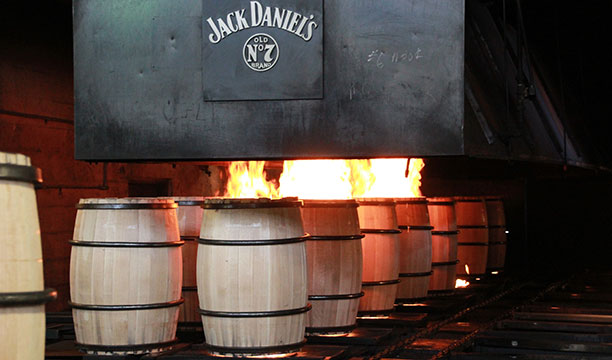 Back in Louisville near the city’s international airport is the Brown-Forman Cooperage, which is open to visitors from the trade only. Here, 300 employees work tirelessly to produce 2,500 new American oak barrels each day. The entire process is seen out here, from seasoning the raw oak planks, sanding and cutting them down to size, forming the barrel shape, and toasting. Above is a batch of new barrels being toasted ready to receive liquid that will one day become Jack Daniel’s. 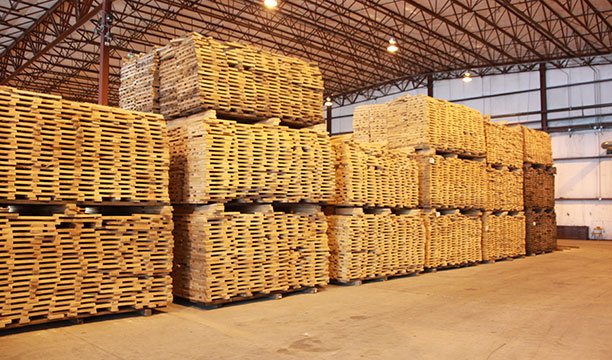 Planks of American oak await seasoning in huge pallets at the Brown-Forman Cooperage. The darker staves at the end of the row in the picture above have been seasoned for longer than the lighter ones. B-F seasons its staves for nine months outside until they contain 10-12% moisture. 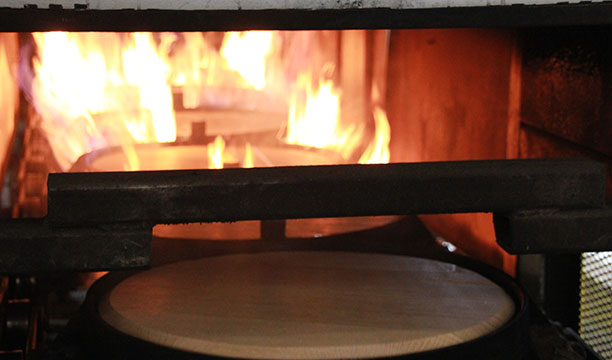 Barrel ends travel through their own charring oven before being placed on finished barrels. 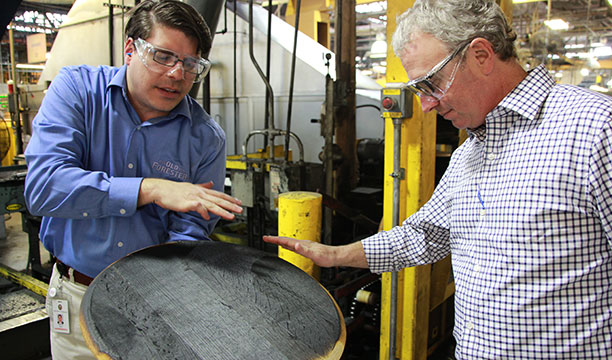 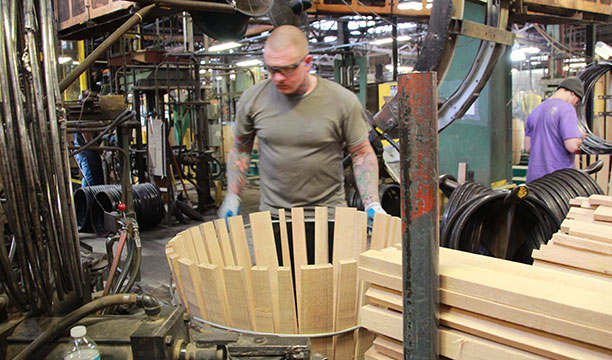 A cooper puts staves together using an iron ring to form a new barrel. He must pick staves that are just the right size to ensure the barrel doesn’t leak when it’s filled. A large stave must be used in every barrel in which to drill the bung hole. These coopers aim to produce 250 barrels each every day, and are tracked on an overhead counter. 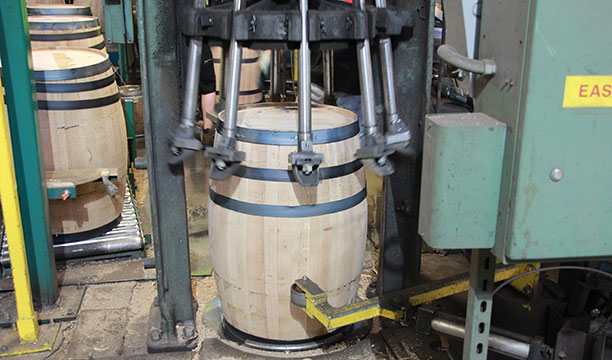 Aiding the coopers in their work are a line of fully automated machines, that make light work of applying the steel rings. Up at the Maker’s Mark Distillery in Loretto, the bottling line workers put rumours to rest that the brand is not “hand made”, by hand-dipping each bottle in Maker’s signature red wax. 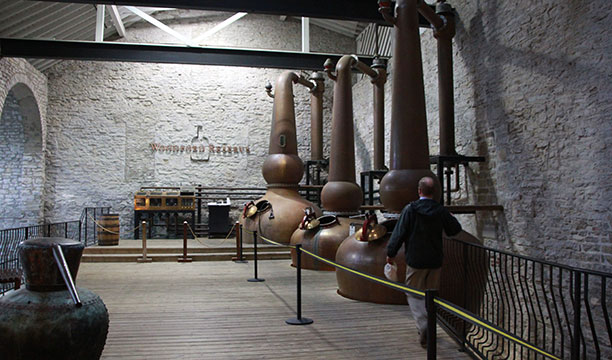 Over in Versailles, KY, Woodford Reserve Distillery is busy making plans to install three new stills along the left wall of the still room, essentially doubling its production capacity. 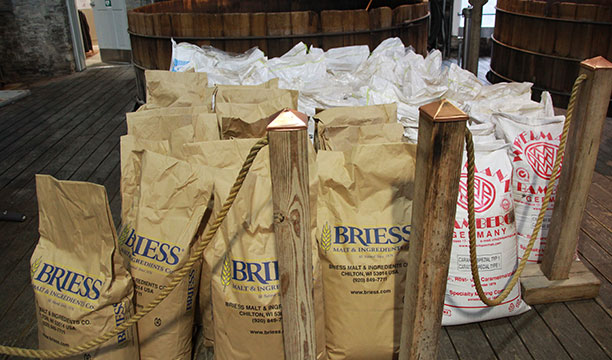 As SB took a tour around, courtesy of master distiller Chris Morris, we came across this batch of malt, rye and corn. Morris confirmed it would be mashed together and used to create a future expression for the Masters’ Collection. 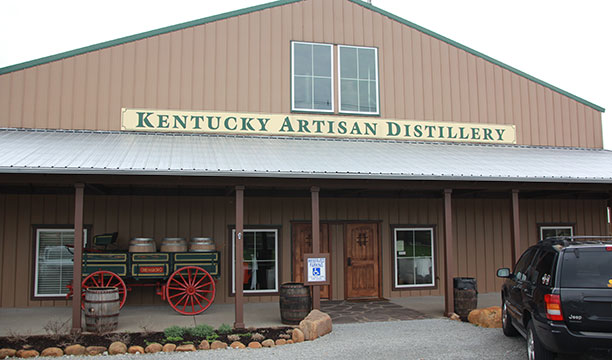 Staying in Kentucky but driving further out of Louisville is the Kentucky Artisan Distillery, which produces and bottles whisky for a variety of independent brands. Most recently it has become the official home to Jefferson’s Reserve, which has rented the front-of-house retail space to showcase its products and tell its brand story. Jefferson’s, which was founded by Trey Zoeller, is operating independently of KAD, but is using its facilities to distil some liquid. 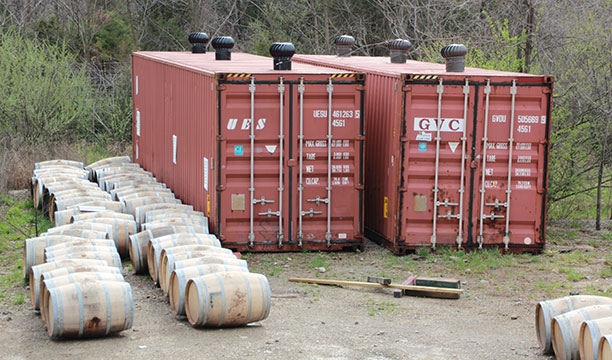 At the rear of KAD are these two shipping containers which have been modified with air vents in the top. They are, rather uniquely, being used to mature Jefferson’s latest expression Groth Reserve Wine Cask Finish. 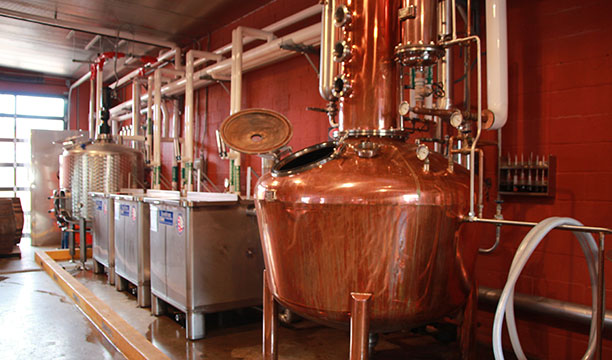 Back in Louisville is the Grease Monkey Distillery at the Distilled Spirits Epicentre. Here students from around the world visit with the specific aim to learn the art of distillation with the adjoining Moonshine University. Large distillers also use the facilities to run small-batch experiments. 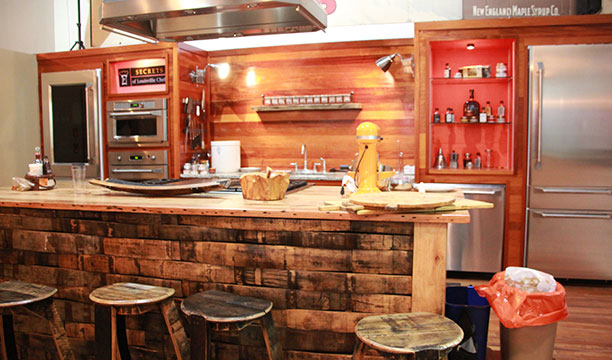 Just around the corner from Copper & Kings Distillery down an old disused railway track in Louisville’s meatpacking district known as Butchertown is Bourbon Barrel Foods. Here founder Matt Jamie produces a range of ambient foods created using used Bourbon barels from Woodford Reserve. Above is the facility’s test kitchen, which is used to test new products in recipes, host gatherings and film a US cookery TV show. 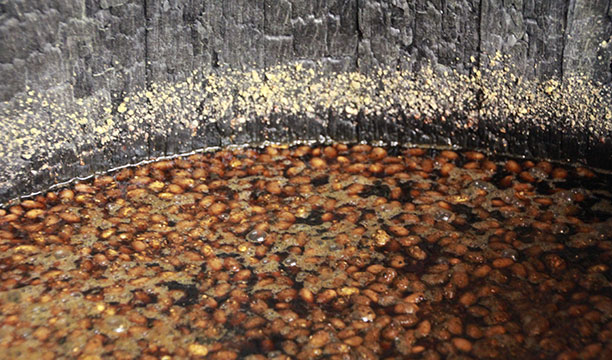 The product Bourbon Barrel Foods is most renowned for is the barrel-aged soy sauce, which is fermented on the premises. Above is a mash of koji – yeast, soy beans and wheat, and brine. 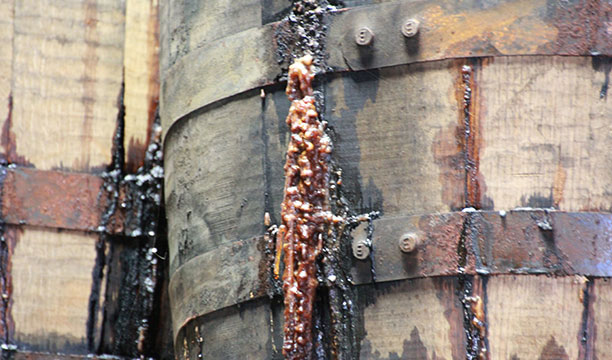 The soy sauce is also aged on-site for 12 months in Bourbon barrels. The soy tends to leak through the staves, forming these brown, crusty stalactites that are extremely salty and rich in flavour. Incidentally, the “B” seen on the steel ring rivets shows that the barrel came from the Brown-Forman Distillery. 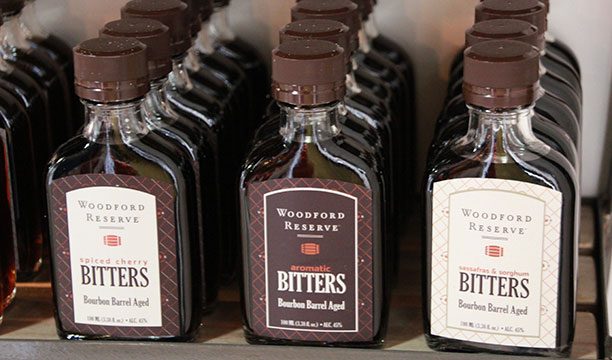 As well as soy sauce, Bourbon Barrel Foods also produces a range of barrel wood-smoked salts, peppers and sugar. In fact, the only alcoholic product made at the facility is this range of Woodford Reserve Bitters, which have been matured in the distillery’s used barrels. There are currently three expressions – aromatic, spiced cherry and sansafras and sorghum. Currently the bitters are only available in the US, but SB understands plans are afoot to bring the range to the UK soon.