Whether a Marilyn Monroe vodka, or a gin which pays homage to Humphrey Bogart, there is an array of spirits brands out there named after stars of the past.

In a highly competitive marketplace, spirits brands will do any multitude of things to stand out from the crowd, such as using a face or name from the past to sell their products.

Fans of spirits, film, music, art or literature fans are enticed by these savvy brands, and will collect them as memorabilia of their favourite icon.

This list includes everything from a coconut vodka dedicated to Elvis and his love of Hawaii, to a whiskey which reunites Frank Sinatra with his favourite brand.

Other spirits which pay homage to icons of the past include a John Wayne Bourbon, a Brontë sisters liqueur and a Jane Austen gin.

Click through the following pages to discover our pick of the top 10 spirits dedicated to dead celebrities. If you have some more ideas, let us know by leaving a comment below.

Humphrey Bogart may be famed for his memorable line in Casablanca, “Of all the gin joints in all the towns in all the world, she walks into mine,” but the late Hollywood star now has a gin brand in his own name. Bogart’s Real English Gin was launched just this week by Bogart’s estate and Rok Drinks, the drinks arm of Rok Stars, a UK consumer products company co-founded by US billionaire John Paul DeJoria, creator of the Patrón Tequila brand. Each bottle of the gin bears an image of the actor, who was known as Bogie, as well as one of his memorable quotes, such as “never trust a man who doesn’t drink”. 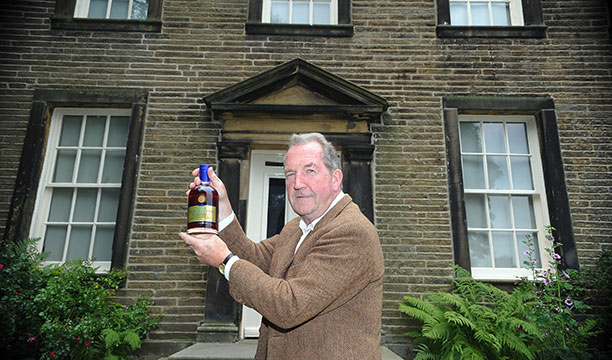 Last month Sir James Aykroyd, the former chairman of Speyside Distillers, unveiled his new liqueur which paid homage to literary legends the Brontë sisters. After purchasing the trademark from a Paraguayan producer, he developed the brand and Yorkshire-based Brontë Liqueur Co. Ltd with the hopes of gaining international distribution. Proceeds from sales of the liqueur will be donated to the Brontë Society, of which Aykroyd is an active member. 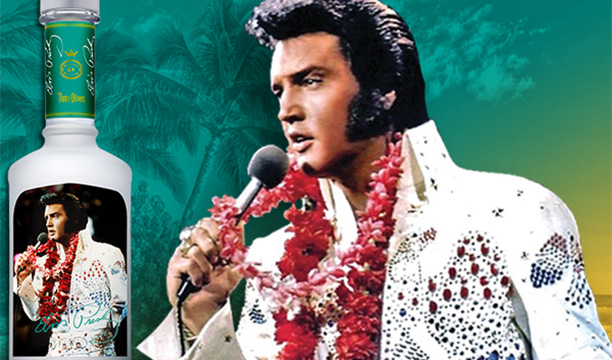 Earlier this year, Three Olives Vodka paid homage to Elvis Presley and his love of Hawaii with the launch of a coconut water-flavoured expression. Brand owner Proximo Spirits teamed-up with the Authentic Brands Group for the release, which owns the intellectual property rights to the Elvis Presley name. The vodka combines traditional English wheat-based vodka with the flavour of coconut water.

Three Olives also released a strawberry-flavoured vodka inspired by iconic bombshell Marilyn Monroe in 2013. The brand partnered with Monroe’s estate – also owned by Authentic Brands – for the release, which has been described as being “symbolic to Marilyn’s sweet, flirty, luscious and sultry personality”. It is described as having a taste of fresh strawberries mixed with a hint of cream. 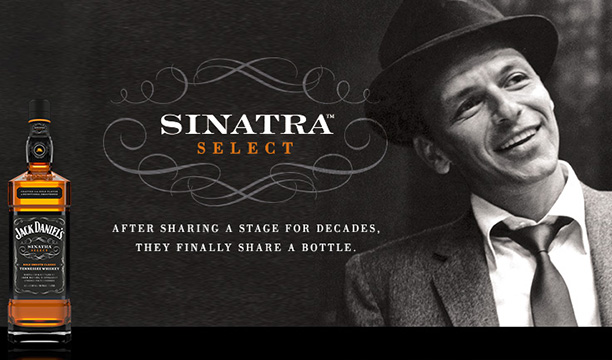 Legendary performer Frank Sinatra was well-known for his love of whiskey and woman, as well as his singing and acting talents. He would also typically offer a toast using a glass of Jack Daniel’s during his concerts from the 1950s to the 1990s, prompting the brand to release the hugely popular Sinatra Select in tribute to the singer. Bottled at 45% abv, Sinatra Select is matured for longer than the core Jack Daniel’s bottling and made using whiskey matured in “Sinatra barrels” – which have carved grooves on their interior to expose the spirit to more wood. The campaign for the variant ran with the tagline: “After sharing a stage for decades, they finally share a bottle.” 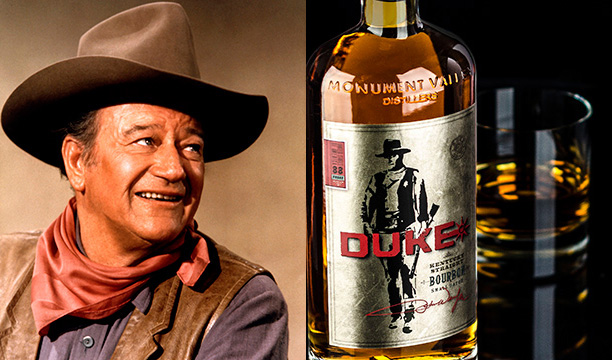 John Wayne’s estate recently launched Duke Bourbon, titled after the nickname of the iconic western movie star. However, the brand has become embroiled in a trademark dispute with Duke University, based in North Carolina, which is claiming the label used in the bottle is “substantially similar” to its own logos, which feature a blue devil mascot and university shield. Until the lawsuit is settled, the Bourbon remains available in the US. 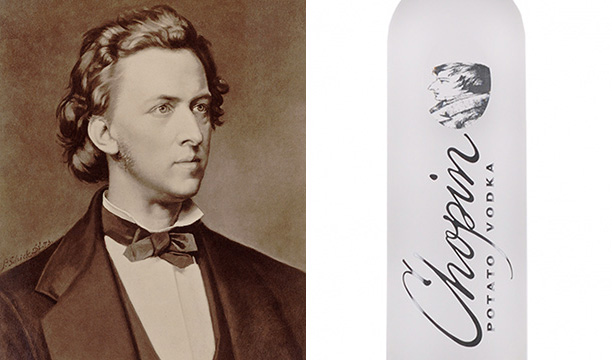 Named after one of the world’s greatest composers, Frédéric Chopin, this Polish small-batch potato vodka brand is produced by produced Podlaska Wytwórnia Wódek Polmos. Four times distilled from organic potatoes grown in the Polish region of Podlasie, Chopin Potato Vodka has won numerous awards since its US launch in 1997. 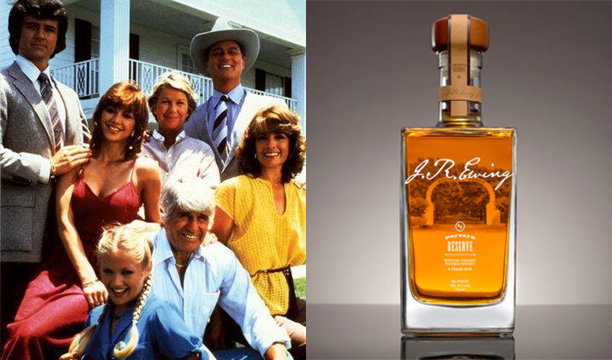 To celebrate the return of hit 80s TV show Dallas, Warner Bros. released a Bourbon named after legendary character J.R Ewing, played by late actor Larry Hagman. The television series followed the lives of J.R and his family, a wealthy Texan clan rife with sibling rivalry, betrayal and corruption. The commemorative bottling, which features an image of the Southfork Ranch – home of the Ewings – is a four-year-old, 80 proof (40% abv) Kentucky Bourbon. 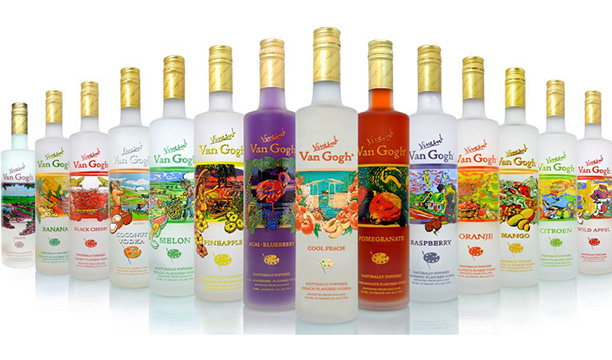 The owner of the Van Gogh Vodka collection claims to celebrate its namesake with “beautiful, artist-inspired packaging and innovative flavors with vibrant, true-to-life tastes.” Named after one of the world’s most famous artists, Vincent Van Gogh, the vodka brand includes two smooth, unflavoured vodkas – Van Gogh Classic-80 and Van Gogh Blue Triple Wheat – as well as 22 flavours. It is owned and imported by Luctor International and produced at the Royal Dirkzwager Distillery in Schiedam, the Netherlands. 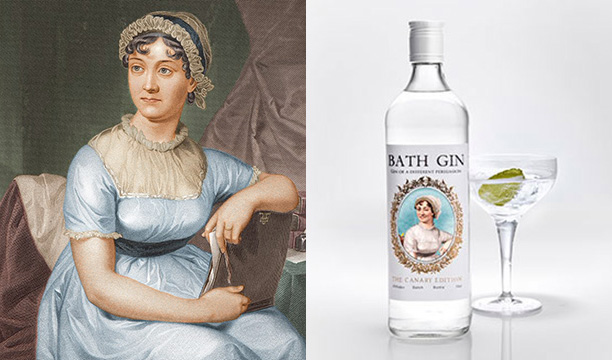 Bath Gin may not be named directly after Jane Austen, but a its label bears the winking image of the famed Pride and Prejudice author. Distilled by Thames Distillers in London and created by Peter Meacock, owner of The Canary Gin Bar in Bath, and mixologist Tim Wehelan, the gin is made from 10 botanicals, including juniper, cassia, lemon peel, burnt orange peel, liquorice, cardamom, angelica, cubeb berries, wormwood and kaffir lime leaf. Jane Austen based a lot of her books on Bath and was also known to enjoy a drink or two – particularly gin.