Sebastian and Savage on ‘breaking the mould’ of Artesian

Following in the footsteps of the team that steered London’s Artesian to be named best bar in the world was always going to be tricky. But, as The Spirits Business discovers, Anna Sebastian and Remy Savage are relishing the challenge. 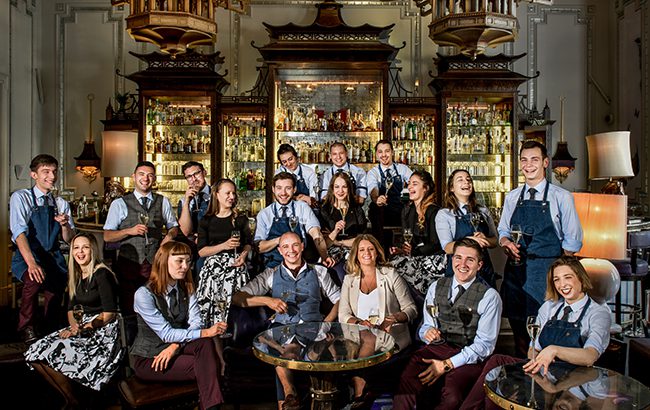 There was a time when Artesian boasted an untouchable status in the cocktail world. With a reputation for innovation and impeccable service, the London hotel bar was revered by trade peers and consumers, and had a bulging trophy cabinet to boot. After the departure of its famous team, Artesian plummeted down the ranks in The World’s 50 Best Bars list, and realised that big changes needed to be made.

Enter Anna Sebastian and Remy Savage, who have come to transform its fortunes. With a wealth of experience in some of the world’s most famous drinking dens, the two are hoping their take on Artesian will be the bar’s most successful to date.

Walking in the footsteps of predecessors Alex Kratena and Simone Caparole was never going to be easy. But bar manager Sebastian, formerly of The Beaufort Bar at The Savoy in London, says: “When we both joined there were a lot of people who were really happy, which was awesome and surprising. But there was some hesitancy, and people telling me it was going to be a challenge.”

London­-born Sebastian is no stranger to challenges: after leaving school she trained to join the army and was offered a place at Sandhurst. However, she instead found herself gaining her first taste of the bar world by handing out flyers in Leicester Square.

Sebastian’s new right­-hand man is head bartender Savage, formerly of Little Red Door in Paris. Raised in France by his Italian mother and Irish father, Savage made his on­-trade debut working in an Irish pub in Lyon in the evenings and at weekends. Savage says: “When I finished my studies I realised I like working in hospitality too much to leave. So I ended up staying in bars and serving people. I love it, it’s fun.”

While Savage travelled from Oxford to Bangkok consulting in bars, Sebastian had left the “dodgy” world of nightclub flyering to work in restaurant PR. After working night shifts in some of London’s best bars, Sebastian left her 9-­5 job and joined The Savoy for its reopening in 2010. As Sebastian entered the world of five-­star hotel bars, Savage’s career was also developing at breakneck speed. In 2014, he was approached by Paris speakeasy Little Red Door to become head bartender.

“I had that moment where you think, ‘what’s next?’” he says. “I hadn’t really seen anything that was exciting, and nowhere seemed like it was the right opportunity for me. When Artesian approached me I thought it was very interesting, I liked the challenges and the fact that it is a new starting point.”

After joining the London hotel bar in November last year, the pair released their first cocktail menu just a month later. Savage says: “That first menu was very technical and all about flavours. We saw it as a blank page and a chance to break away from the old Artesian.”

The Cause, Effect and Classic Cocktails menu was a 14­-strong list that examined the impact of ingredients on flavour. It used ingredients from various regions and at different stages of maturity to demonstrate how each affects the final taste of a drink.

“We wanted to break the mould that Artesian had become,” explains Savage. “After the old guys left, the team was still following that ‘smoke and vessels’ thing. We wanted to do something that was a little bit more clear cut; it was a great way to have a fresh start and adjust to this environment.”

As soon as the first menu was released, Sebastian and Savage busied themselves working on its replacement, which the pair launched in May this year.

Called Artesian Moments, the new menu combines the duo’s ingenuity for mixed drinks with Savage’s passion for philosophy. The inspiration behind each of the 17 cocktails came from the public, with Sebastian and Savage consulting drinkers to find the flavours and feelings they associate with various memories.

Sebastian says: “These cocktails essentially represent life­-defining moments that regular people will be able to share.” To source the flavours to accompany each ‘moment’ on the menu, the pair launched a questionnaire. Questions like: ‘What flavours and feelings do you associate with being a baby?’ helped them create the Artesian Moments list.

“When we sent out the survey and we got the responses back, we found that there were certain flavours that repeated themselves,” explains Sebastian. “It was really interesting to see all these responses come back. Some people went into huge amounts of detail and other people just said one word, but it might have been the one word we hadn’t thought of.” Armed with hundreds of responses citing a multitude of feelings and flavours, Sebastian and Savage began working on the cocktails. The name of each drink is a suffix to the ‘That moment when…’ mantra of Artesian Moments, including ‘…It All Began’ and ‘…You Discovered a Passion’.

For ‘…You Turned 30’, the pair found that the flavour of wine and a feeling of confidence were what most people associated with the milestone birthday. This inspired the ingredients used in the final drink: Glenfiddich 15 Year Old, Sauternes and orange wines and isolated tannins – made from a distillation of Barolo wines.

“We had wine, confidence and whisky as our most popular answers for this question,” says Savage. “After we found this, we looked at the flavour profile of the whisky and tried to pair that up with three different wines.”

Another big part of the menu is the bespoke ingredients created to further enhance the associations with each memory, such as: tears (technically salt and water), strawberry ‘medicine’ and iron sorbet. “There are 58 homemade ingredients for 17 drinks, which is the most ridiculous prep system I’ve ever put in place,” says Savage.

As the pair relaxes following the successful launch of Artesian Moments, Savage and Sebastian can now contemplate Artesian’s future. “We want to create something really special in the long term,” says Sebastian. “You know when you go somewhere and you walk in and just everything is perfect, right down to the music, the people, the drinks and the service.”

Savage and Sebastian hope to fashion an environment where people leave happier than when they arrived. “It’s not rocket science; we make drinks and we want to make people feel good,” says Sebastian. “As long as we’re having fun, the team are having fun and, hopefully, our guests are having fun, I think that’s all achievable.”