From award-winning TV commercials to controversial print ads, spirits brands sure know how push the boundaries of advertising to engage their audiences.

With so many similar products out there, companies are always trying to stand out from the crowd, and if that means being a bit wacky or suggestive, they’re prepared to do it. Even if it means bending the rules of alcohol marketing.

Jim Beam were criticised for targeting too young an audience with its ‘Jim Beam on Campus’ campaign, while Skyy Vodka’s ads are constantly blurring the boundaries of linking alcohol to sexual success.

And in this ever-changing and increasingly competitive world, brands have to be a bit more imaginative and innovative than developing simple print and TV ads. Absolut Vodka once took to displaying slogans across the Luxor hotel in Las Vegas, while Ballantine’s has held an interactive tattooing session for Facebook users.

Here’s our pick of 10 spirit brands that have gone the extra mile to get noticed. 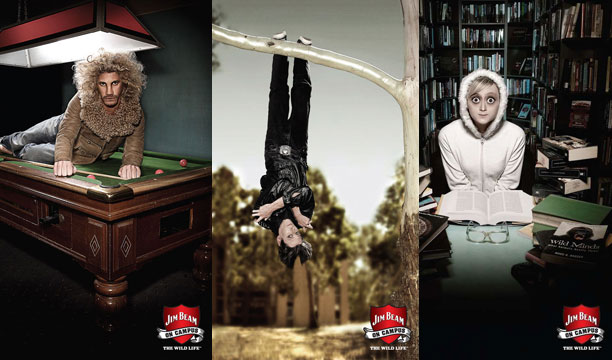 Beam’s eponymous Bourbon brand launched the ‘Jim Beam on Campus’ campaign in Australia back in 2004 in order to market Jim Beam as the go-to spirit for university students. The series of posters featured a disturbing fusion of students with wild animals in their natural university habitat.

A powerful message that a life enhanced with Jim Beam is a wild one, or just plain odd? Last year one of the adverts received a complaint that the students in the adverts did not look over the age of 25. One of the ads included the tagline ‘Unleash the Beast’ which was criticised for encouraging excessive drinking. 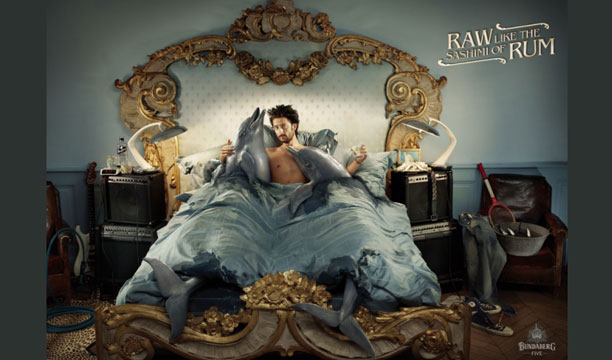 Bundaberg’s ‘Clear Character’ campaign by Leo Burnett Sydney in 2011 set out to promote Bundy’s new white rum by showing just how much of a “clear spirit with character” it is. Aimed at young men, one of the print ads features a smug-looking guy in bed with two dolphins sidled up next to him, along with the tagline ‘Raw like the sashimi of rum’. We have no idea what it means either. 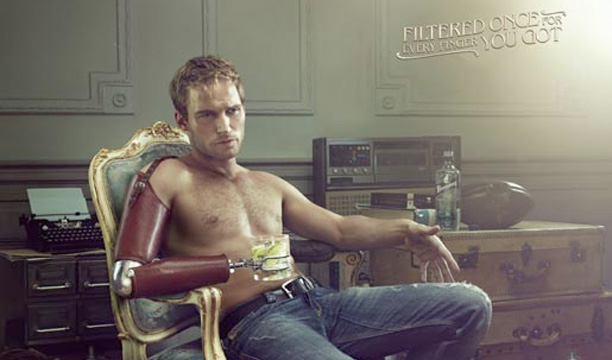 Although this ad, released as part of the same campaign, is a more obvious message, it’s a hell of a lot grittier than the dolphin malarky. ‘Filtered for every finger you’ve got’ is the tagline, alluding to the five remaining fingers still belonging to the disabled gentleman in the image with just one arm. At least he’s still able to hold a glass of Bundy Five with his prosthetic.

Bundaberg also created a ‘Clear Character’ TV ad where a man’s experience in a dull bar was transformed when he goes for a Bundy’s Five. Suddenly a tuxedo wearing bartender swoops in, 80s music video style, soulfully singing: “Ain’t no poser’s drink, it’s a player’s drink, ain’t no boy band drink, It’s a manly drink”. Mr Cool takes the man on a magical journey to the character-filled world of Bundaberg Five, complete with players, gold, fountains and a camel. 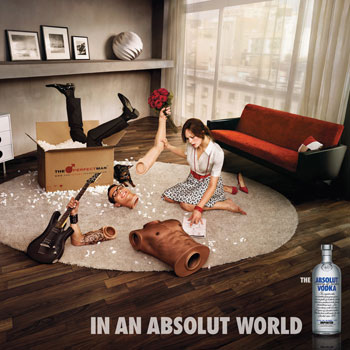 In 2006 the vodka brand launched its ‘In an Absolut world’ campaign with a series of surreal magazine and television ads. The company created various fanciful scenarios of what their drinkers might think of as a perfect, or ‘Absolut’, reality. One Absolut TV ad showed police fending off pillow-wielding rioters. Print ads showed images of pregnant men and Times Square filled with priceless artwork. The group even wrapped the Luxor pyramid in Las Vegas in signs saying: “Welcome to Vegas. You are now in an Absolut World.”

However in 2008, an advert was placed in Mexican publications featuring a map of the US and Mexico with the boundaries between the two as they were before the 1836 Texas Revolution and the Mexican-American War. American consumers were up in arms, claiming the advert was insensitive to immigration issues. Absolut claimed it was whimsical in intent, having no political agenda, but critics were adamant and the ad was finally withdrawn. 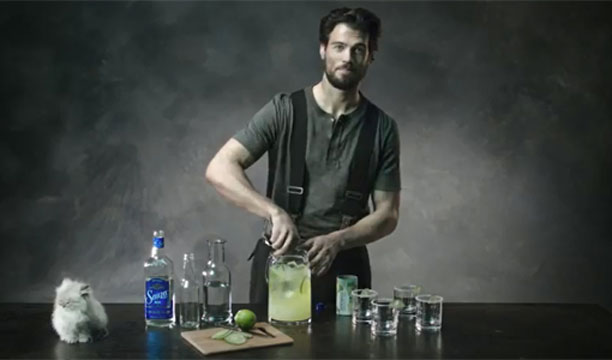 Last year this female-focused tequila brand launched its ‘Make it with a fireman’ TV ad featuring a buff fire fighter. He convinces you that he is the ultimate lady’s man who understands every woman’s need (“discussing leggings and jeggings vs pant peggings”) as he crafts a Sauza Tequila cocktail – cute, cuddly kitten in tow.

With the tagline’s cunning word play merging the attractiveness of having a cocktail made by a hunky, suave fireman and actually going out with one, it’s pretty effective. Sauza recently launched a new line of Sauza Sparkling Margaritas, along with a follow up TV ad ‘Make it with a lifeguard’ which has gone viral since its upload 7 days prior to this article.

The leading vodka brand’s long running ‘Through the Bottle’ campaign launched in 1993 with an award-winning TV ad ‘Message in a Bottle’. This followed a waiter carrying a bottle of Smirnoff across a cruise ship with the view through the bottle displaying the dark side of whatever he passed: a flower morphed into a Venus flytrap, a black cat into a puma, a necklace into a snake. A flurry of print ads followed, using the same formula of a Smirnoff bottle distorting the viewers perception of the world.

Through the years the ad has been copied, spoofed and entered pop culture – the sign of a successful ad campaign. It became so established that an ad was made that did the exact opposite of what was expected and was understood. Ten years after the ad’s inception, Smirnoff created an advert that didn’t even use a bottle anymore. It simply featured a view of the Thames, but straightened out, to promote drinking straight Smirnoff.

The ‘Leave an Impression’ campaign was initially launched by Ballantine’s in to attract “sophisticated young drinkers” though a series of extravagant digital innovations. One of the initiatives involved a live stream of tattoo artist K.A.R.L working on a regular customer, whose new tattoo was altered live using suggestions from from Ballantine’s Facebook users. One of the tattoos created included a QR code that when scanned with a smartphone revealed a hidden animated image.

Another initiative was the creation of a digital T-Shirt, TshirtOS, which connects to the internet via a mobile app so that users can program a message to appear on it, as well as play music from iTunes and take pictures using an in-built digital camera. A recent innovation was creating the social media platform ‘Ballantine’s Loud Blue’ which uses an algorithm to turn Instagram photos into music. The platform launched in Brazil last year and will be rolled out in other locations over the next two years. 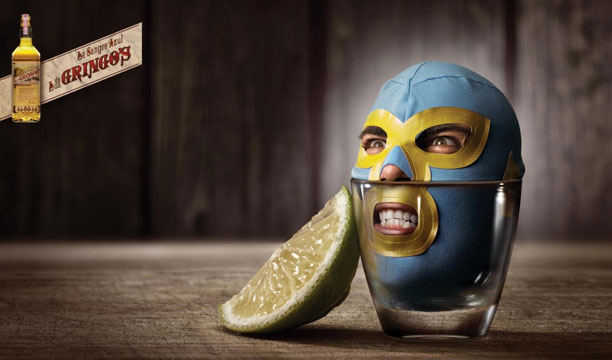 This campaign for La Sangre Azul de Los Gringo’s from the Volcano ad agency in Johannesburg, South Africa in 2009, features shrunken heads stuffed into a shot glasses. From the fearless masked luchador called Jesus to the brave El Matador Peligroso (The Fat Matador), the concept is clear – man up and have a shot. The adverts, as well as being eye-catching, portray Los Gringo’s Tequila as an “uncompromising, powerful alcoholic spirit”, with the little heads acting as pure attitude in a glass. No doubt those Tequila brands that have worked hard to move the spirit’s image away from its shot culture were furious about the ads. 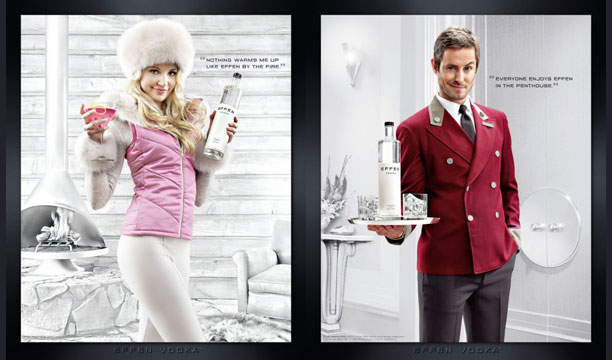 The Beam-owned vodka brand’s 2010 ‘Provocatively Premium’ campaign used its name to create a series of suggestive ads to embody Effen’s super-premium quality. Each ad shows a sophisticated individual displaying their own meaning of premium in a stylish environment. On the left, a chic skier is shown with the quote, “Nothing warms me up like Effen by the fire”, and on the right, a smirking butler says. “Everyone enjoys Effen in the penthouse”.

Effen vodka has had some fun with its name over the years – one print ad for its black cherry flavour used the tagline ‘Effen in the dark’.  But this campaign from Havas Worldwide Chicago tried to build upon the brand’s history of clever and bold advertising by spicing up the double entendre. An effective innuendo, or just another attempt at combining alcohol with attractiveness? 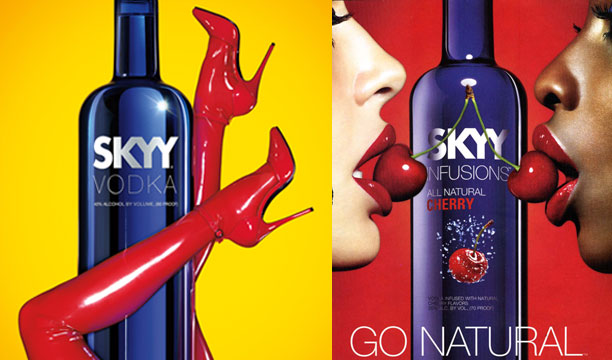 The global ‘Skyy Sexy’ campaign took a more bold approach to the ‘sex sells’ notion in 2010 with five striking ads shot by fashion photographer Raymond Meier. Each ad showcased a provocative interpretation of Skyy’s sexy brand image with the iconic cobalt blue bottle as the focal (or phallic) point.

Skyy has a history of tantalising ad campaigns, and with them a track record for complaints about objectifying women and sexualising alcohol. This one was no different – people claimed that underage children might see the ad and link sexual prowess to drinking their vodka. However for Skyy Spirits, the issue was how to get noticed by the Facebook generation, as their mission is to attract 21-34-year-old social media hounds and encourage them to send their ads viral. 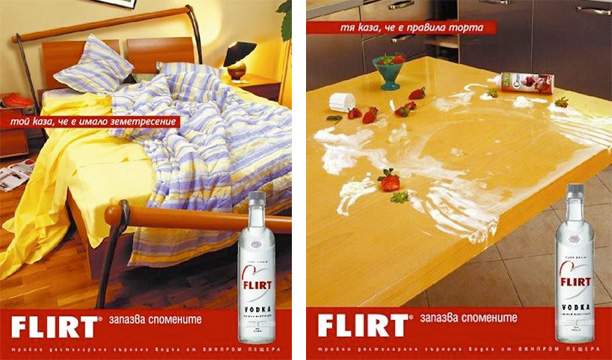 Flirt by name, flirt by nature was the motto for these suggestive series of adverts from the Bulgarian vodka brand that won a Spirits Business Master medal in 2012. The risque series of print adverts, which ran on billboards, bus stops and in magazines, suggests that drinking Flirt will improve your luck in getting a member of the opposite sex in the sack – and these two are the least graphic of them all.