Cognac has enjoyed a real growth in interest in the past 12 months, with sales and value in the sector jumping significantly. We put the liquid to the test in our annual blind-tasting contest.

Cognac has experienced a boom in the past year, with drinkers looking to stock their home bars with high‐end bottlings from heritage producers. In 2021, the French brandy’s value soared by 31%, and its volume sales jumped by 16%, reaching a total of 223.2 million bottles sold, according to the Bureau National Interprofessionnel du Cognac.

We set out to put this flourishing category to the taste test in The Cognac Masters 2022, gathering industry experts at London venue Abigail’s in Vinegar Yard to assess a multitude of entries. All samples were judged blind.

Chairing our first panel was Matt Chambers, co‐founder of the Whisky for Everyone blog and the North London Whisky Club. He was joined by: Bernadette Pamplin, freelance spirits writer and founder of the Under the Ginfluence blog; Evan Prousaefs, bar manager and assistant general manager of Los Mochis restaurant in Notting Hill; and Michael Fichtner, head bartender at the Coburg Bar at The Connaught hotel in Mayfair.

The second group of judges was led by Melita Kiely, editor of The Spirits Business, and comprised: Dimple Athavia, founder of All Things Drinks; Bryan Rodriguez, wine and spirits buyer at Harvey Nichols; and Anne Jones, drinks experience and event development, Waitrose.

The competition got off to a strong start with the No Age Statement – Super Premium flight, in which two Gold medals were awarded. One went to Rémy Martin Club, with its “soft, fruity and inviting nose” and “really rich palate”, and the other to Rémy Martin 1738 Accord Royal, with a “delicious palate with juicy dried fruits and warming wood spices”.

The Gold standard continued in the No Age Statement – Ultra Premium round with Rémy Martin Tercet. “Very drinkable, all in balance, and approachable with enough concentration and complexity,” Jones said.

Concluding the no‐age‐statement rounds, our judges turned their attention to VS – Premium Cognacs, finding Martell VS worthy of a Silver medal. 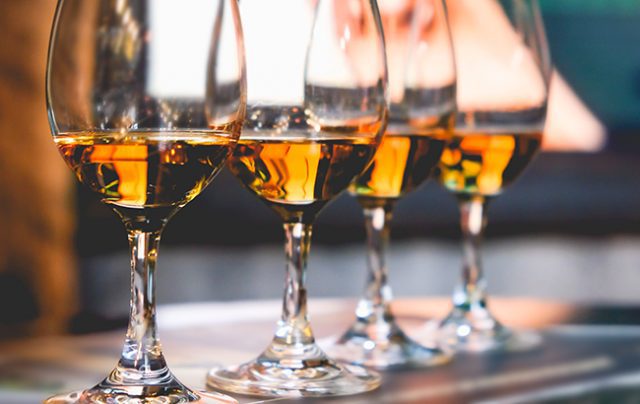 Of the VS bottlings in the super‐premium price bracket, Honor VS Cognac stood out to our experts, earning a Gold medal for its “nicely balanced palate” with “some raisins, dates, gentle baking spices and caramel sweetness”, according to Chambers. Two Silver medallists were also discovered: Branson Cognac VS Phantom and Ferrand 1840 Original Formula.

The VS portion of the tasting finished with a flight of single cru bottlings, in which Courvoisier VS bagged a Gold medal for its “superbly elegant nose” and “creamy and fruity” palate.

“These are all mixing Cognacs,” said Rodriguez, talking about the VS flights overall. “They work for what they are. I’d like to see them embrace less caramel colouring and sweetness.”

Next our panellists moved on to VSOP – Premium expressions, and the first Master medallists of the day were revealed. Honor VSOP snapped up the top award thanks to its “clear notes of pear and wood both on the nose and palate”, along with its “lasting and expressive finish”.

A Master medal was also bestowed upon Cognac Frapin VSOP, which boasted a “rich and peachy nose” with “juicy raisins and sultanas and a drip of orange oil”.

The premium VSOP bracket produced six Gold winners, too. Among them were Bisquit & Dubouché VSOP, the recently revamped brand from Campari, with its “hints of ginger and spice”; and Ferrand 10 Générations, offering “savoury notes” and “pastry‐butter sweetness on the finish”.

Branson Cognac continued its winning streak in this round as a Gold was handed to its “fantastic” VSOP Grande Champion expression. “Maybe a little disjointed at times rather than a seamless journey, but overall a great experience,” said Pamplin.

Battleborn Spirits’ Shay by Le Portier and Cognac Jean Fillioux’s Subtil & So VSOP also lived up to the Gold standard in the super‐premium VSOP flight.

A pair of Gold medallists made themselves known in our VSOP – Single Cru tasting. One was Courvoisier VSOP, with “elegant and layered fruitiness”; the other was A de Fussigny’s Borderies VSOP, with “notes of apple, pear and ginger and a lasting finish”.

Our judges were delighted to find another Master‐worthy bottling in the VSOP – Single Estate flight: Hermitage 10 Years Old Grande Champagne Cognac. “I thought this was fabulous,” Rodriguez enthused. “I can see myself putting it into a balloon glass and just nosing it, and relaxing for half an hour.”

Martell added to its medal collection in the XO – Premium round, as its “elegant and complex” Noblige Cognac secured a Gold. Moving on to the XO – Super Premium flight, and Naud Distillery’s Naud XO Cognac took a Gold medal. Our experts proceeded to a flight of XO – Ultra Premium Cognacs, the most expensive price bracket of the day.

Meanwhile, Martell gained a pair of Gold medals – one for its XO bottling, with a “tropical” palate, and another for the “full‐bodied and rich” Cordon Bleu. “Forthright” Rémy Martin XO and “very sippable” Ferrand Sélection des Anges took Gold medals too.

Cognac Frapin earned another Master medal in the Vintage – Single Cru category for its Millésime 1995, acclaimed for its “thick, full‐bodied, almost oily” texture, “wonderful” length and “nice complexity”. “The palate is a dream,” Rodriguez said. Hermitage Cognac ensured proceedings ended on a high note, bringing in two Master medallists in the final round, Vintage – Single Estate.

The producer’s 1975 Grande Champagne Cognac impressed with its “roasted walnut and chocolate‐whip aroma” and “magnificent” palate, while its 1972 Petite Champagne Cognac was celebrated for its “well‐rounded combination of fruit, sweetness and spice”. “It is so nice to see the possibilities with these single cru or estate expressions,” Prousaefs said.

With all of the samples assessed, the judges tasted each Master medallist for a final time, before naming Cognac Frapin – Château Fontpinot XO as the Cognac Taste Master 2022.

“There were some wonderfully elegant Cognacs showcased in this year’s blind tasting, which continued to prove why this category is globally revered,” reflected Kiely.

“I was hugely impressed by the standard in the VSOP premium flight. Consumers can find some exceptionally well made expressions in this subcategory, and at a relatively accessible price point, too. That will only help to open up the category to more curious drinkers and elevate Cognac further.”