From a sleek, design-led drinking den in London’s Liverpool Street to a garden-to-glass bar in Phoenix, these are the openings that made waves in January.

Cocktail lovers had plenty to get excited about in the first month of the year, with a multitude of impressive bar openings around the globe.

The team behind London whisky retailer Milroy’s graced the city with their new independent venue in the Pan Pacific hotel, while Athens became home to a fresh concept from the creators of The Clumsies bar.

Read on for our pick of the new bars we’re adding to our bucket list – and for more openings, check out our list from December.

Kim Haasarud is a mixologist, beverage consultant and the president of the United States Bartenders’ Guild – and she’s also the force behind Garden Bar, an airy new drinking den set in a 1914 California bungalow in Phoenix’s South Roosevelt district.

The bar boasts a garden-to-glass ethos and a drinks menu that changes seasonally. Its debut winter menu features the Plush Port Punch, a clarified milk punch based on a recipe from the mid 1800s with ruby Port, cachaça, tea, lemon and whole milk; Citrus Mélange, a French 75 riff with salted citrus cordial, gin, blanc de blancs, lemon peels and a sugar rim; and Cuppa Cold Coffee, a mix of cold brew coffee, reposado Tequila, cacao and a whipped Sherry cream.

As January drew to a close, the team behind whisky retailer Milroy’s opened the doors to Silverleaf, a stylish drinking den in east London.

Tucked away in the 144-year-old Devonshire House on the grounds of the Pan Pacific London hotel, the bar is inspired by naturalism and the elements. The interiors were designed by Tom Dixon’s studio, with striking features such as a tactile bar and tables carved from impressive slabs of marble. Meanwhile, Milroy’s managing director Martyn ‘Simo’ Simpson curated the venue’s thoughtful selection of spirits, presented in a gold display cabinet.

Vasilis Kyritsis and Nikos Bakoulis, the duo behind Athens bar The Clumsies, have joined forces with Three Cents mixers founder Dimitris Dafopoulos to create a new bar with a focus on fermentation.

Inspired by the world of wine, Line Athens serves a variety of ferments made from pomegranate, figs, apples, honey and more – each developed in collaboration with notable winemakers and breweries – plus a selection of cocktails and a food menu that includes hot dogs and freshly baked bread.

Hidden within a subway station on 50th Street in Manhattan’s Midtown neighbourhood, Nothing Really Matters is the latest speakeasy-style bar to hit the city.

The neon-lit underground space has capacity for more than 70 thirsty commuters, and serves a menu of drinks that draws inspiration from the city that never sleeps. Cocktails include The Empire State, a mix of vodka, maple, spiced apple and lemon, and the Knickerbocker Bramble, made with Bourbon, blueberry, lemon and rosemary.

Chicago-based chef Stephanie Izard has opened an outpost of her Peruvian-inspired restaurant Cabra on the rooftop of downtown LA’s Hoxton Hotel. Alongside a menu of sharing plates – think ceviche, lomo saltado and avocado dip – the venue features a poolside bar, with a drinks list curated by beverage director Daniel Dooreck. Naturally, Pisco Sours feature heavily, as do Peruvian wines and beers. 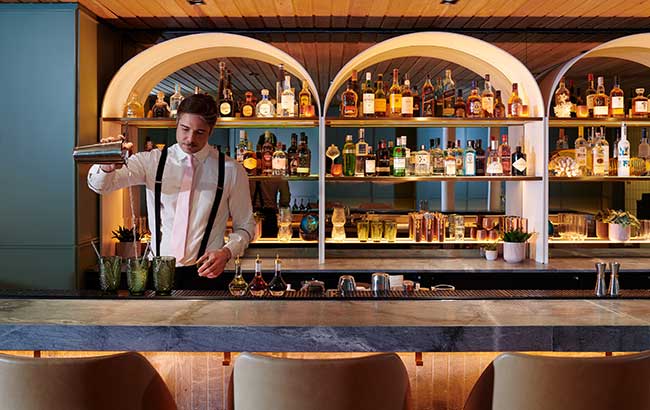 The venue embraces a global theme in both its food and drinks: dishes such as the Paneer Wellington and Desi Scotch Egg bring together flavours from different cultures, and its cocktail list, created by bar manager Riccardo Lupacchini, is themed around the earth’s biomes.

Inspired by the desert, El Camino is a mix of Casamigos Blanco Tequila, mesquite, pineapple tepache, agave, grapefruit and tamarillo; the mountains were the jumping-off point for Breath of Fresh Air, with Ginepraio, pine cordial, Swiss herbs, gentian, juniper and elderflower cider. A portion of the profits from each drink is donated to a charity supporting sustainability.

For Tequila-focused party vibes in the US capital, head to Salazar. The new three-level bar aims to shake up Washington DC’s late-night scene with DJs, happy hours and big-screen TVs.

Hungry guests can choose from a menu of tacos, quesadillas and more before hitting the dance floor. In terms of drinks, agave spirits and their natural partner, the Margarita, are a major draw here. The venue features a selection of different Margarita riffs, and Salazar’s classic house version is available on tap by the glass and the pitcher.

Mandarin Oriental Hyde Park has debuted The Aubrey, designed to bring a taste of Japanese izakaya-style drinking and dining to London. Taking over for Bar Boulud, the new venue is the first UK venture from Hong Kong-based hospitality group Maximal Concepts, which launched The Aubrey Hong Kong last year.

The London outpost is styled as a ‘listening bar’, drawing inspiration from funk and disco music. It also features an omakase cocktail experience, in which bartenders craft drinks according to each guest’s personal taste. The drinks themselves shine a light on a variety of premium Japanese spirits – for instance, The Black Cat combines Ki No Bi Gin with yuzu liqueur and a tonic reduction, while Torii contains rice shōchū and homemade grapefruit soda. Saké lovers will also find plenty to enjoy here, with a list that includes rare releases from some of Japan’s top breweries.