New year, new bar: these are the venue openings you need to know about from last month – pay them a visit and kick off 2022 in style.

If your New Year’s resolution is to tick a bunch of amazing bars off your bucket list, we’ve got more than a few to add to the selection.

December saw a variety of exciting new venues open in cities around the world. London’s Fitzrovia neighbourhood became home to a Ukrainian-inspired drinking den, while a veteran of the renowned bar at The Savoy opened his own cocktail spot in Kensington High Street.

Meanwhile, Paris saw the unveiling of a rooftop bar with breathtaking views of the city, and a watering hole with a major emphasis on rare spirits opened in Austin, Texas.

Read on for our pick of the best bar openings from last month – and for more new openings, check out our list from November.

Pinch, a new addition to London’s Fitzrovia neighbourhood, brings Ukrainian style to the heart of the city. The bar features playful cocktails and small plates, plus a weekend brunch offering. The traditional Ukrainian drink nalivka – vodka infused with herbs, berries or roots – plays a starring role here, and the venue serves its homemade infusions neat by the glass.

Elon Soddu, the former head mixologist of the acclaimed Savoy hotel, has launched his own venture in London’s Kensington High Street – and it promises to deliver all the elegance of classic Italian bartending in a laidback environment. Soddu recruited a team of hotel bar professionals for the opening, and his team developed 12 inventive serves billed as ‘simple in their concept and complex in their delivery’.

“Amaro embodies a passion for great flavours and experiences,” Soddu commented. “Running the project from scratch, I had the chance to bring to life my own bar concept, combining the excellent service and mixology of a five-star hotel with the intimacy and approachability of a neighbourhood bar.”

New York City speakeasy Bathtub Gin has debuted an outpost in Los Angeles’ Melrose Avenue, bringing its ornate Victorian-meets-1920s aesthetic to the west coast after years of planning. The bar features a rolling schedule of live entertainment, from jazz musicians to burlesque and DJs, plus a range of cocktails that riff on the classics. And, true to its name, the venue also has a list of elevated gin and tonics – for instance, Four Pillars Shiraz Gin is paired with Fever-Tree Mediterranean Tonic and garnished with cassia and grapefruit for a warming, rich serve that highlights the gin’s aromas. 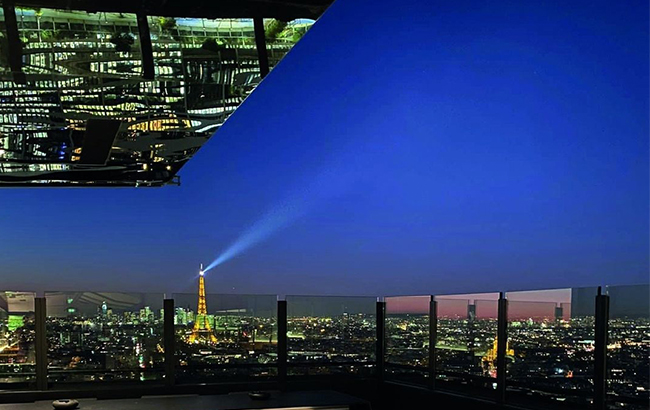 Hospitality company Ennismore has revealed its latest project, an open-air rooftop bar on the 32nd floor of the Pullman Paris Montparnasse hotel. It’s the latest launch under the group’s Skybar brand, which already has branches in Miami and Los Angeles in the US, Doha in Qatar, and in the Bahamas.

The bar’s guests can enjoy panoramic views of Paris – said to be the highest in the whole of the city – while sipping a selection of signature cocktails. The drinks list is divided into four sections themed around texture (Sparkling, Silky, Airy and Tart), with serves including Grilled Corn, featuring peanut butter fat-washed Caleño, sweetcorn syrup, fenugreek seeds and yellow curry leaves.

This new Italian bar and restaurant in Soho from the team behind Lobos Tapas promises a relaxed dining experience with top-notch pizzas and pastas – and, of course, a cocktail or three. The 70-cover space features exposed brick walls, green leather booths, zinc-topped tables and a brass-plated bar where cocktail lovers can enjoy infused Negronis – the menu offers five different variations on the drink, as well as a non-alcoholic version.

A new drinking den has graced the bar scene in Austin, Texas. Tucked away in the cellar of the beloved comfort food restaurant Moonshine Patio & Grill, which itself is located in the historic Waterloo Compound, Kinfolk is a new project from restaurateurs Larry Perdido and Chuck Smith, as well as Joe Nguyen, who serves as the bar’s director of operations.

The team has developed the bar with a strong focus on rare whiskeys and other spirits, including mezcal, Tequila and more. Meanwhile, the cocktail menu draws on bartending history through its four sections – Fancy Drinks, Old Fashioned & Improved, Daises and Fizzes – which each explore the evolution of these different drinks categories. Peckish guests can order macarons to go with their cocktails at present, and in the coming weeks the bar will expand its food offering to include local charcuterie, cheese and chocolate.