Many of the producers and countries in this year’s competition confirmed newer whisky-producing regions have made leaps and bounds in recent years when it comes to their liquid. We present the medal winners of 2020. 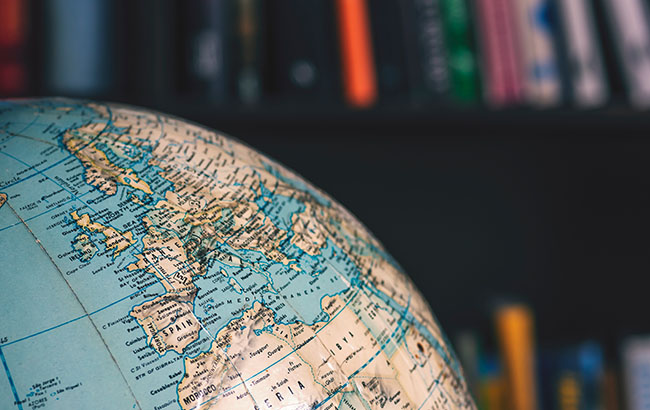 While more established whisky categories, such as Scotch, continue to pique consumer interest globally, producers from less‐developed whisky‐making regions are also attracting attention. Japan’s craftsmanship is a worldwide phenomenon that has left producers playing catch‐up as demand for their products continues to soar. Hop over to Australia and brands are building a strong reputation – much like their counterparts in Europe.

Whisky is breaking free and creating a diverse offering of flavours and styles around the globe. But as the world whisky category expands, is quality also on the rise?

The 2020 World Whisky Masters sought to assess the current state of the category. Judging this year’s competition from the confinement of their London homes because of the Covid‐19 pandemic were Billy Abbott, ambassador at The Whisky Exchange, and me, Melita Kiely, editor of The Spirits Business. Each entry was decanted, labelled and shipped to each judge’s house by Wine Sorted, guaranteeing complete anonymity throughout the competition.

“The whiskies that were standouts in this flight were the ones that did something different,” said Abbott. “[Kavalan Solist Fino Sherry] had this almost musky note on the nose, in an aromatic and fragrant way, but that led into this dark, rich palate of incredible dried fruit and liquified fruit cake. The aromatic element really impressed me.”

The medals did not stop there, however; the flight also produced 16 Golds and two Silvers. The Golds included additional Kavalan expressions, such as Kavalan Solist Port, described as having “berry jam and dark chocolate” on the palate. King Car Conductor Single Malt also won a Gold for its “spiced sponge cake palate with sultanas”, while M&H Elements Sherry was awarded Gold for flavours of “sweet cream and sharp apple”.

“These were so consistently good,” said Abbott. “There were no peaks and troughs, just people making good whisky well and consistently doing so. Outside of Japan and India, people in Asia have not been making whisky that long. In less than a couple of decades to get to the stage where we have so many good whiskies is impressive.”

In the Australasia: Blended flight, Lark Classic Cask won a Gold medal for its “piney nose, thick and porridge‐like body, with sharp berry notes and fruitcake batter”. In the Australasia: Blended – Premium, Starward Two‐Fold met the Gold standard, with its “soft grainy nose with hints of gingerbread” that evolved into “wine cask fruitiness and a gently spiced” palate.

Australian spirits producer Archie Rose took a Gold medal for its White Rye whisky in the Australasia: Single Grain heat. The whisky was said to have a “rich cereal nose with sharp orchard fruit (slightly stewed)”, leading to a “crisp” palate with the “fruit from the nose and a touch of marshmallow”.

As we moved on to single malts from Australasia, Archie Rose received another Gold for its Single Malt Whisky. The palate was said to deliver notes of “chocolatey grain, hints of tar and stewed apples”. Lark Cask Strength took Gold for notes of “chocolate” and “green leaves developing into fruitiness”.

“Both whiskies needed a little more time to withdraw all the different threads,” noted Abbott. “This category is better and better every year. I now seek out the Australian flights because there’s so much interesting whisky coming from Australia,” he said.

Four Gold medallists were discovered in the Australasia: Single Malt – Super Premium flight, all of which were picked up by Australian producer Starward. The first was awarded to Starward Solera with its “creamy palate of toffee and fudge notes, joined by orange and mango”. The second went to Starward’s Nova whisky, which the judges described as having “buttered toast and black pepper” on the nose, along with “chocolate covered fruit jelly” on the palate.

A Gold was also handed to Starward Ginger Beer Cask, with its “spicy palate, with bitter notes at the fore and rich stewed orange at the back”. Starward Tawny received a Gold for its “piney” nose and “soft and rounded palate, with cake and stewed fruit”. 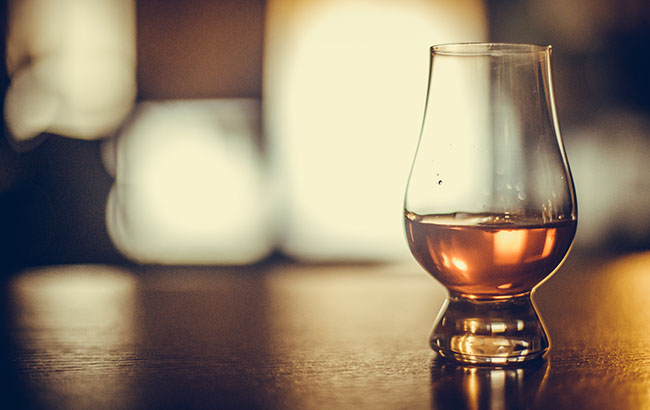 Moving away from Australasia, the next flights were from Canada, starting with a Gold‐standard premium expression: Bearface One Eleven Series Oaxaca Agave Spirit. “This was exactly what I would expect Canadian whisky at this level to be like,” enthused Abbott. “It has that sweeter aspect you get from the base whiskies, interesting little bits and pieces coming through.”

In the Canada – Ultra Premium round, a Master medal revealed itself in the form of Black Fox Single Grain Canadian Whisky. “This was done very well, expressing raw ingredients in the final product to create a balanced whisky,” said Abbott. Tasting notes included “spicy palate” with “mint and a touch of stewed lemon”. Black Fox was also awarded two Golds for its “soft and round” blended whisky, which also had “building spice”, and Black Fox Cask Finished Canadian Whisky, with its “leafy nose” and “some chocolate notes” developing on the palate.

The tasting moved on to Europe, excluding Ireland and Scotland. Taking price into consideration, a Silver medal was awarded to Fowler’s Whisky in the Blended – Standard round, which delivered “lots of sweetness” on the palate. A flight of standard blended whiskies produced a Gold for the Czech Republic’s Stará Myslivecká Rye Reserve. “Lots of orange citrus and sherbet with a hint of chocolate,” noted Abbott.

“Delicate, but complex. It had subtlety. It did its own thing, but it wasn’t trying to shout, it was just working subtly rather than in broad strokes.” “Looking at the blended whiskies, these were definitely not Scottish blended whiskies, which I’m really pleased about,” said Abbott. “When people talk about whisky in the past, it’s more about traditional country styles. These are trying to be their own things, to create their own identities.”

A Master medal was sampled next in the single grain contingency: Stará Myslivecká Single Barrel Bourbon. The whisky was praised for its “rich toffee nose with a touch of orchard fruit”, which led to “fresh apple, creamy notes and a background of chocolate” on the palate. “I was very surprised and I was very impressed,” said Abbott. “It wasn’t what I expected from a single grain whisky, it had this herbal minty flavour, a creaminess, but also fruit.”

A large flight of single malts from Europe (excluding Ireland and Scotland) were tasted next. Nine Gold medals were awarded in this flight. Welsh whisky producer Penderyn picked up Golds for its Myth and Celt expressions. Penderyn Myth was described as having a “creamy palate with more barley sugar notes”, while Penderyn Celt had “zingy lemon and toffee”.

The Cotswolds Distillery also picked up two Gold medals in this flight for Cotswolds Hearts and Crafts Sauternes Cask with its “barley sugar and grain palate”, and Cotswolds Peated Cask, with “tannic puckering through the cheeks” and “freshly smoked barley” flavours. Six Silver medals were also dished out during this flight, including one to Penderyn Rich Oak, which balanced “cream and vanilla notes with sharp apple”. Norwegian spirit Bivrost Niflheim also took home Silver thanks to its “wine cask spiciness and toffee” on the palate.

“There is no consistency, which is exactly what you’d hope for from this category,” said Abbott with enthusiasm. “There’s such a wide range of countries, different distillation traditions, now coming to distil grain rather than fruit. We had everything from whiskies that tasted like borderline Scottish all the way through to things that tasted like barley eaux‐ de‐vie. This category has got so much better over the past few years. Every year the quality just goes up and up.”

A super‐premium flight of European single malts (excluding Ireland and Scotland) resulted in another Master medal, this time for Gulliver’s 47 English Single Malt Bourbon Cask. The judges enjoyed aromas of “burning leaf” on the nose and “sweet mint and toffee” building on the palate. “Very Islay‐ like,” Abbott said. “If you’d given me this entirely blind, I’d have said it was a very young, very good Islay whisky. Excellent balance of smoky sweetness, minerality, it was excellent. This is a great everyday whisky, a classic Highball whisky.”

Gulliver’s 47 English Single Malt 10 Years Old Quarter Cask picked up a Gold in the ultra‐premium flight. The nose was said to emulate “grilled meat, mulchy leaves” while the palate portrayed “more smoky meatiness” while “toffee and vanilla notes swirl around underneath”.

Commenting on the Master, Abbott said: “The balance is the thing that pushed it above the other whiskies. It has very large Sherry character, but it didn’t get overwhelmed. It still had some creaminess and vanilla custard—type notes; you could pull out lots of different flavours. The ABV was spot on and the intensity of flavour was perfect.” 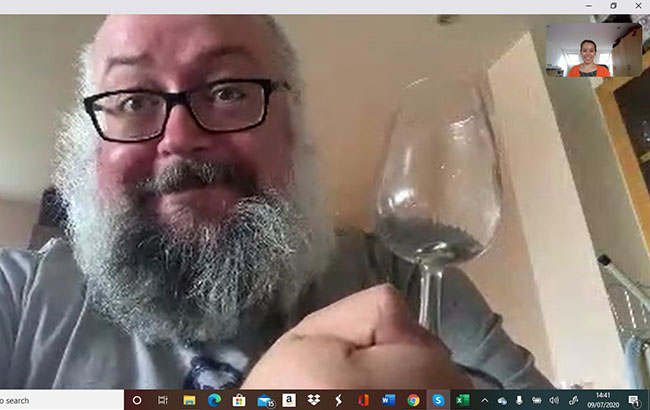 Abbott expanded further on the rising reputation of Indian whiskies, noting a stark contrast in quality compared with several years ago. “Indian single malt is a very small category that is increasingly growing,” he said. “The distilleries know what they’re doing now, they’re past the innovation stage and they’re making great whiskies. These three show that perfectly.”

Japan’s whiskies are so popular that there is a shortage of liquid. The entries tasted in this year’s competition showed why the category continues to be so revered. Blended Japanese expression Umiki Whisky was awarded a Gold medal for its “spicy nose and creamy palate” with “jelly notes developing”. Kamiki Original secured a solid Silver medal in the blended flight, enjoyed for its “fragrant nose with aromatic oak and pink‐shrimp sweets”.

It was then time to put the Master medals through one final tasting to determine the 2020 World Whisky Taste Master. It was a close call in the end, but Abbott and I agreed that Kavalan Solist Vinho Barrique Single Cask Strength Single Malt Whisky was thoroughly deserving of the ‘best in class’ title.

“It had this almost savoury, aromatic note that reminded me of clove‐studded oranges,” Abbott explained. “It had a slightly musky note and was doing something very different, but then leading into a toffee‐style palate. Just an exceptional whisky.”

The key takeaway from the World Whisky Masters 2020 was there is variety in abundance to be found in this sector – and the quality is also there to back it up.

“I am no longer surprised by the Asia (excluding Japan and India) category; I now expect it to be good, and it did not disappoint,” Abbott concluded. “Australasia continued to grow, not being afraid to experiment. And Europe continued to develop from the traditions of distillation already at hand, and is expanding into grain distillation and creating unique whiskies. That experimentation and trying to define whisky under its own terms is a great thing to see.”

Click through to the following page to see the full set of results from The World Whisky Masters 2020.