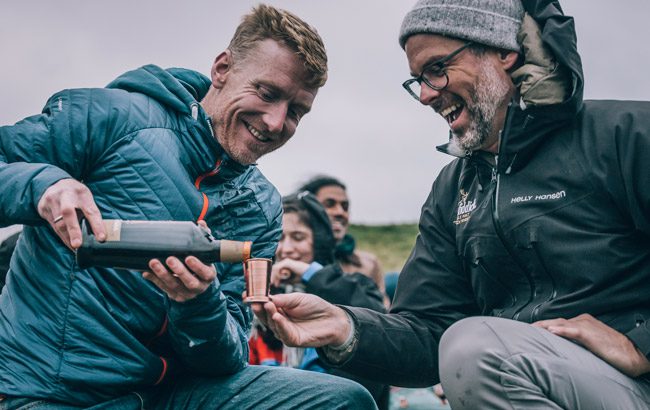 Glenfiddich launched its Join the Experimentalists campaign at The View from The Shard in London this week.

The attraction at the top of the tallest building in Europe will host the entire Glenfiddich Experimental Series until 21 December.

Glenfiddich also marked the launch of the event with a micro-adventure with adventurer Alastair Humphreys. 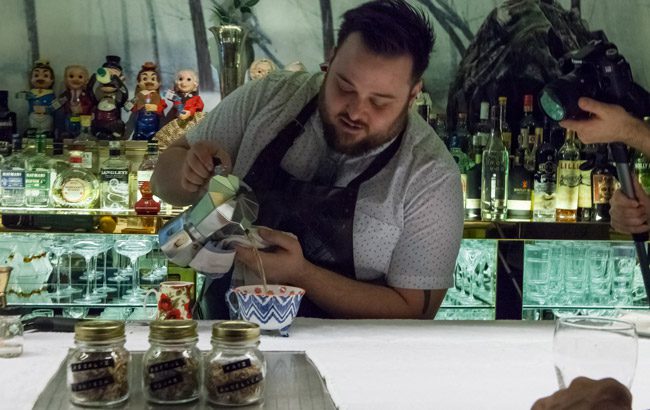 Following the theme of ‘forest heritage’, Portillo’s creation was served hot and combined Goral Vodka with a range of forest flavours, such as birch leaves, liquorice bark, angelica root and eucalyptus.

Portillo will next compete to be named Goral Vodka Master of Master at the final in Bratislava in January. 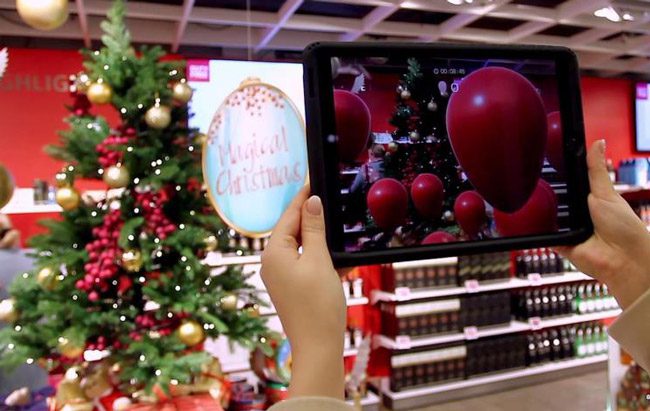 In the run-up to Christmas, Heinemann Duty Free is bringing augmented reality to Berlin’s Schönefeld Airport.

From 3-24 December, shoppers will be able to play an augmented reality game to win discount in the airport’s duty free stores.

By popping virtual balloons which appear on the screen of an iPad, customers can win up to 20% off their purchases, and whoever bursts the 1000th balloon will win €100. 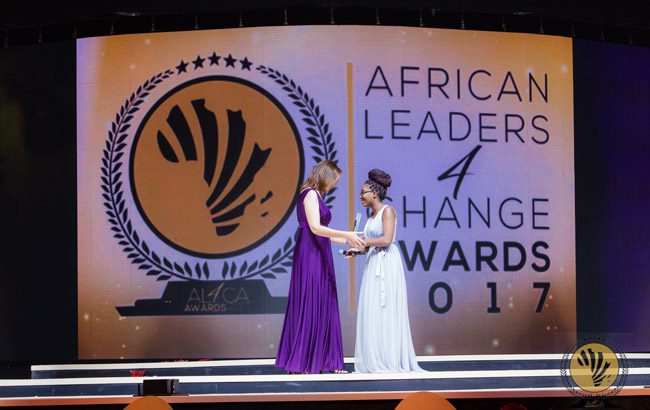 Following on from its Gold medal win in the Global Liqueur Masters earlier this year, Amarula has been recognised in the African Leaders 4 Change awards.

The liqueur producer received the African Leader in Philanthropist & Charity Partnership award. It was nominated following its work making a difference in the African continent, having a positive impact on the African people without seeking a financial reward. 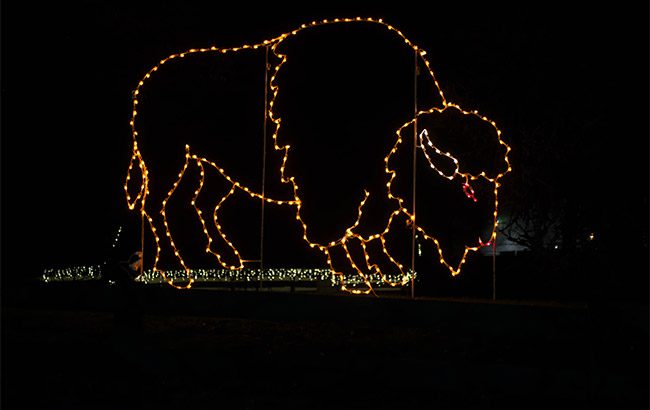 Buffalo Trace launched its Christmas celebrations off this week with the 19th annual Lighting of the Trace event.

140,000 Christmas lights across the distillery were switched on by Frankfort mayor Bill May, as he pressed the ‘magic button’ to welcome the Christmas spirit to the distillery.

Cookies and hot chocolate were served to families and friends of the distillery as carols were sung and children had the chance to meet the big man himself, Santa. 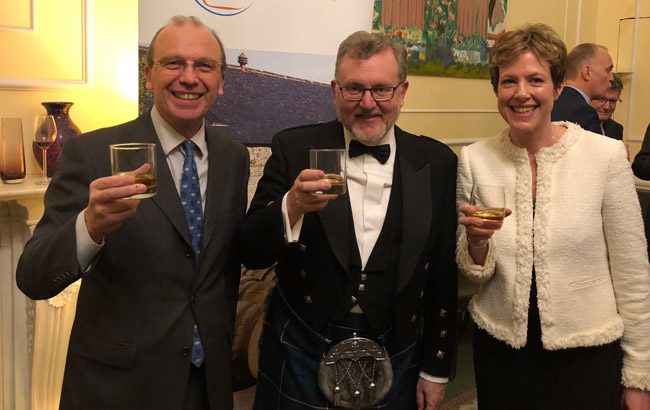 The Scotch whisky industry celebrated its position as the UK’s leading food and drink export at a special reception at the Scotland Office in London earlier this week.

MPs, members of the industry and media were among those who gathered at Dover House in Whitehall for the event.

Scottish Secretary David Mundell said: “It was a pleasure to welcome the Scotch whisky industry to Dover House. Whisky is a huge part of Scotland’s economy, and I am confident that the industry will and continue to go from strength to strength.” 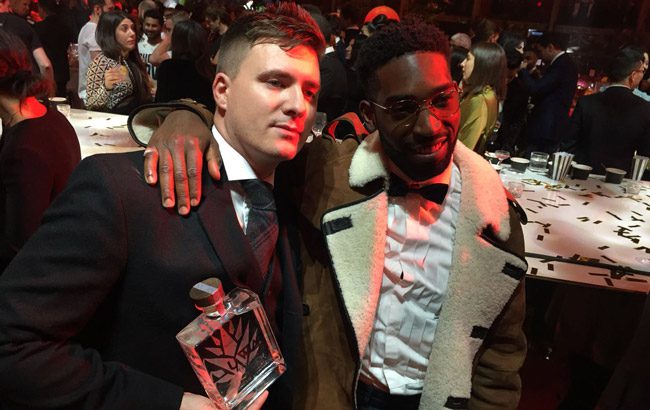 Scottish Tequila brand UWA officially launched in the UK market at the star-studded Fashion Awards at the Royal Albert Hall.

The awards ceremony welcomed over 3,000 guests to the event, which was hosted by comedian Jack Whitehall and model Karlie Kloss.

The small batch Tequila firm created bespoke bottles for the event, offering A-list celebrities the chance to become the first people to get their hands on the new luxury spirit.

The event was attended by Dame Anna Wintour, Selena Gomez and Tinie Tempah 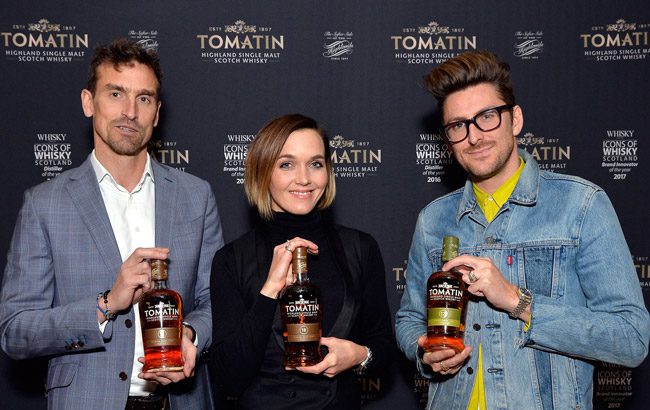 Highland distillery Tomatin unveiled its People Pairing test, which aims to match personality traits to different expressions of its whisky.

Holland was matched with the smooth 12 Year Old as “this expression is paired perfectly with a man as suave and confident as Henry Holland”, Pendleton’s personality’s perfect tipple was the 18-Year Old because just like her paired whisky, Pendleton is “classy and ambitious” and finally Cool was “a handsome match for Tomatin’s 36-Year Old, a world-class, mature dram”. 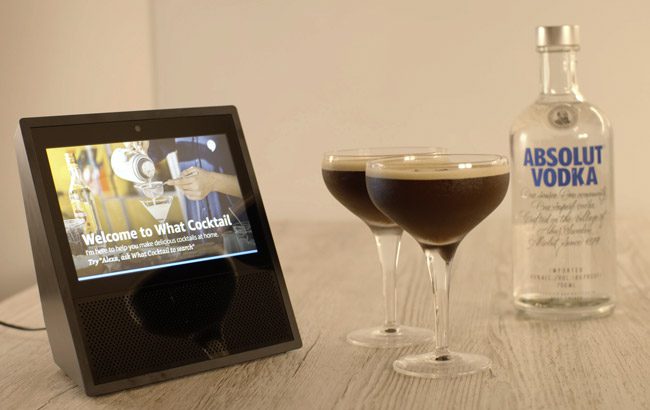 The company’s ‘What Cocktail?’ Alexa Skill is compatible with the new Amazon Show device, and aims to teach people to create drinks out of ingredients they already have at home.

The ‘What Cocktail?’ skill is available to download for free from the Alexa Skills store. 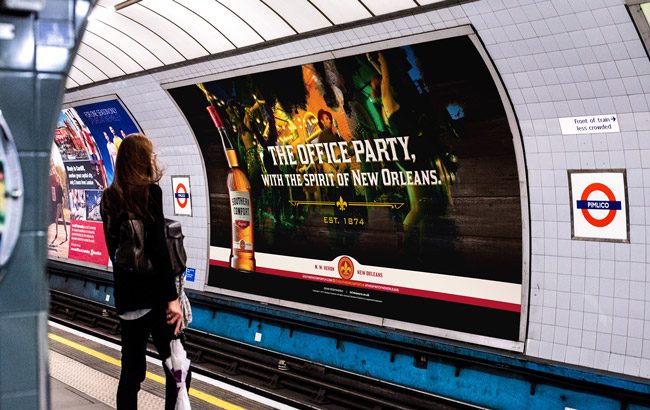 Southern Comfort has launched a new campaign focussing on its New Orleans roots as it seeks to drive sales over the Christmas period.

Southern Comfort’s new campaign will appear in UK cinemas and on posters across the British Rail network, using the strapline ‘The Spirit of New Orleans’. 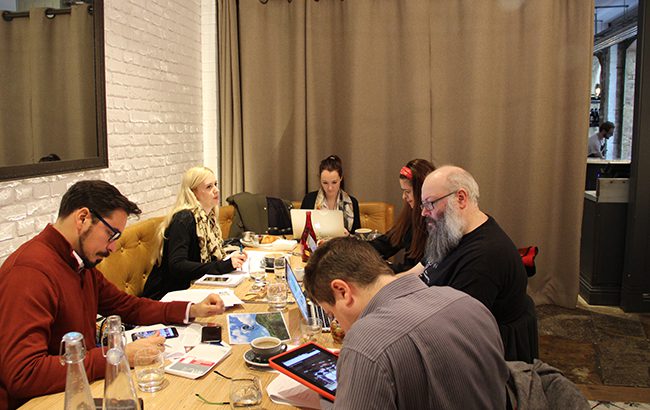 On Tuesday, SB gathered a team of experienced judges at Charlotte’s W5 to take part in our Distillery Masters – the first of our 2018 Global Spirits Masters.

The full results will be published in the January 2018 edition of The Spirits Business magazine. 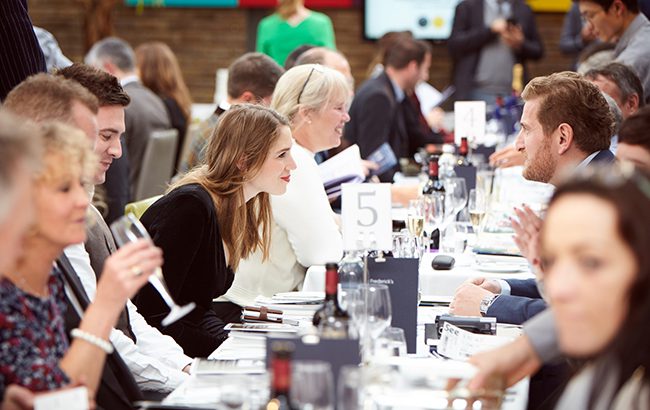 The great and the good of the industry joined in celebration of spirited excellence, with an abundance of certificates and trophies handed out.

To see the full list of Grand Spirits Masters and Taste Masters, announced on the day, click here. 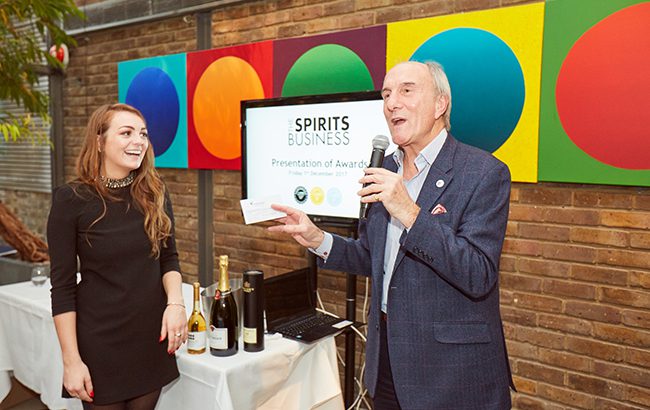 During the lunch, David Cox, the outgoing chief executive of drinks industry charity The Benevolent, held a raffle to raise funds for his organisation.

In total, guests donated an impressive £620. Gillian Murphy from William Grant & Sons was the lucky winner and walked away with three highly-prized bottles of wine. 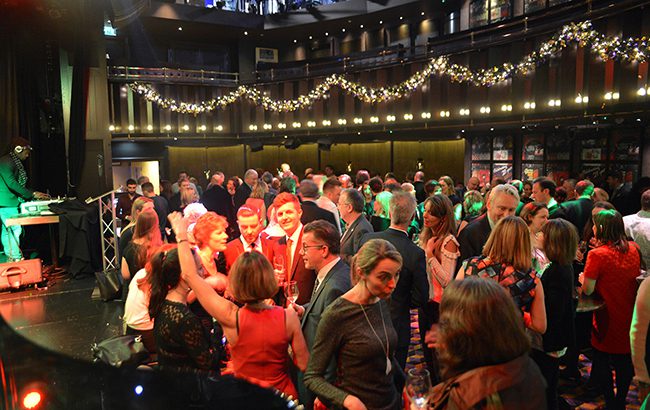 The fun didn’t stop there for David Cox, who celebrated his retirement with a party earlier this week.

Since stepping into the role as chief executive of The Benevolent in 2013, David has worked tirelessly to raise funds to support members of the UK drinks industry facing serious illness, financial hardship or personal crisis.

The Spirits Business would like to wish David a very happy retirement. We hope to be enthralled by his dance moves long into the future. 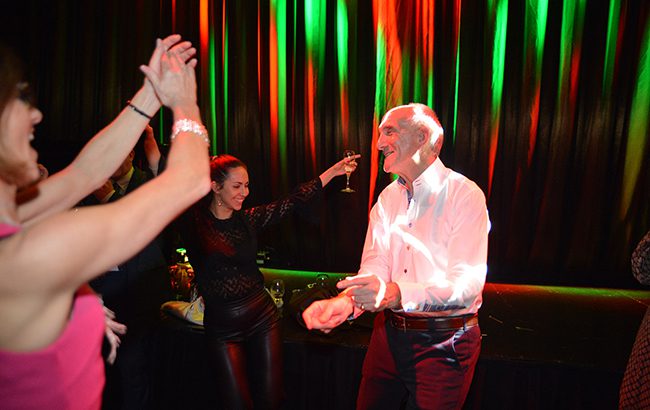 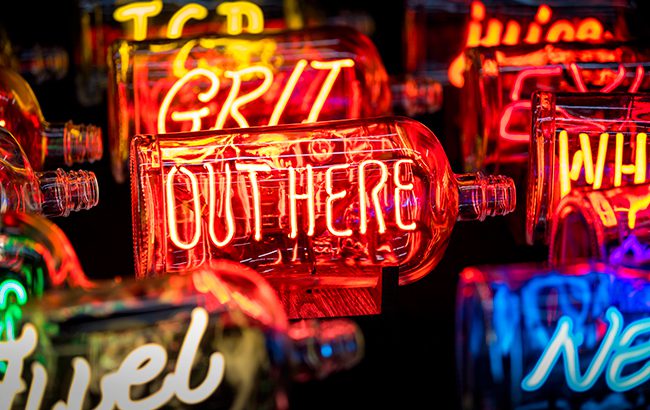 Created in collaboration with neon artist Lisa Schulte Saatchi Art, the collection will be displayed during Miami Art Week, on until 11 December. 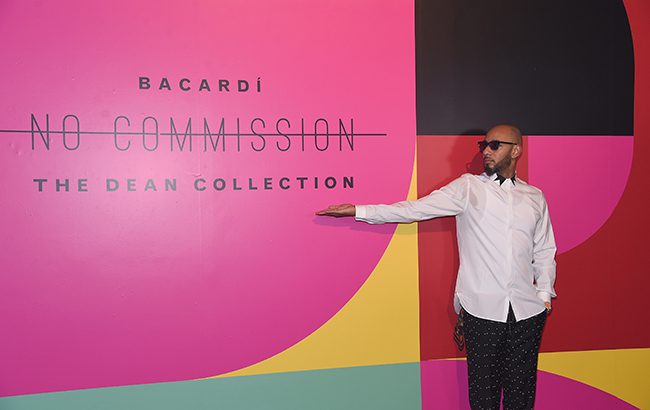 Since its inception in 2015, No Commission has “challenged traditional art fair formats” by giving artists free exhibition space and total control of sales. 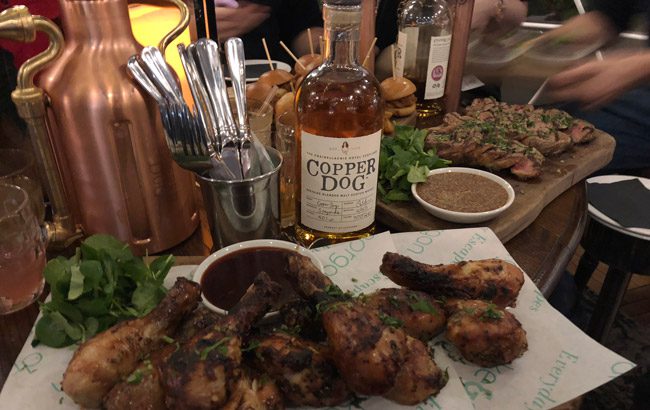 SB headed down to The Sipping Rooms in Canary Wharf to try out a selection of Copper Dog whisky cocktails with food pairings.