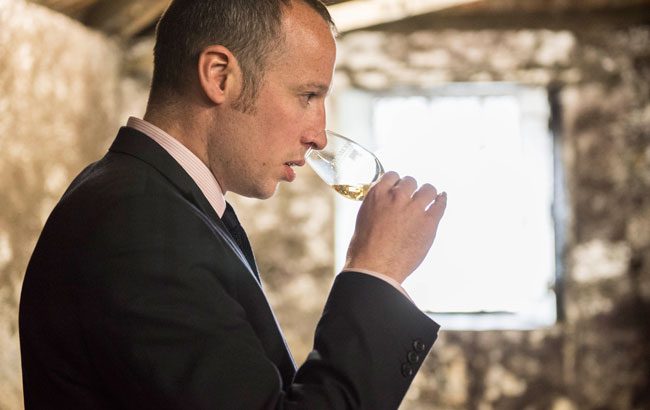 How long have you been working in the whisky industry?

I’ve been working with whisky for about 12 years and I now work for the Glenmorangie company between its site and the Ardbeg distillery on Islay.

Here, my official title is head of maturing whisky stocks, so I’m in the whisky creation team at Glenmorangie and my boss is Dr Bill Lumdsen. I’m basically responsible for all of our casks of maturing spirit and I get to work side by side with Bill and the rest of the whisky team on new projects.

I guess the long term plan is that once Bill rides off into the sunset I’ll take over as the director of distilling whisky and whisky creation.

What has it been like working alongside Dr Bill?

You learn a lot! So I already know about distilling as I’ve been a distiller most of my career and I know a fair amount about wood maturation, but I’ve learned a lot over the last few years by getting thrown in at the deep end and by getting to work on my own projects.

The things I’m doing with Bill are probably the harder stuff to learn. So when he noses a cask, straight away he’ll say “this is great” or “this is really good”, but he knows if it isn’t great so he’ll start thinking about what we can do to it. He’ll start to think about if we should just leave it to mature for longer, or he’ll say does it need to spend some time in a different cask.

So it’s been brilliant to watch him work and I’m just starting to get my head around how it all works and what you can try, what you should try first and what’s not good to try first.

Was An Oa the first whisky you worked on by yourself?

Well, I guess whenever I work on something by myself, it will always be something of a group effort and Bill is always in charge of things.

But, yes from the early days An Oa was Bill setting the task for me to go and do. First of all I had to see if we had enough Ardbeg stock to provide another core range whisky. While doing this, I found some old Pedro Ximenez, Ex-Bourbon and virgin oak casks which I could then use to mix up hundreds of blends, some that worked and some that I knew didn’t work.

So An Oa was very much a project I worked on from the start but there’s definitely a collaborative effort throughout. You put together these blends and then you take these to Bill and the sensory panel and you look for feedback, comments about common flavour notes, common aromas and words to describe the texture.

Eventually as it started to develop, Bill said to me: “Try and make it smokier and sweeter than Ardbeg 10, which could be a good place to go.”

So it was his guidance that made me go away again and work on more blends and more samples, and that was probably another year working away. And then it would all come again in front of the whisky creation team so as it got nearer the end of the project everyone was working on it and everyone was nosing and tasting and grading over and over again.

It was definitely my project and I was there from the start but I don’t think you ever truly work on something on your own, you always need more than one nose on the project.

An Oa finishes its maturation in a French oak vat, how does this affect the spirit?

So this was the one bit of the project that wasn’t me, this was just something that Bill knew would work. We had learned from the Glenmorangie Companta release, which had quite a lot of different red wine casks in it, that all the different casks seemed to have knitted together a little bit with time, and that’s why we thought that An Oa could benefit from a little more time.

Now we could have put it in a stainless tank, and we did think about that, but it was Jim Swan who told us that the traditional method to marry whiskies would be in a porous oak vat. So really, all that happens over the three months is that flavour wise everything just changes by two or three percent and everything just rounds off a little and becomes more integrated, the flavours knit together a bit better.

Do you have any plans to use this oak vat for any future expressions?

At the moment, it’s just for An Oa but there are a couple of whiskies that we’re starting to think about marrying up. It wouldn’t be used for something like Glenmorangie original or Ardbeg Ten just because of the supply chain and the logistics. So I think unless we were to make an Ardbeg in the future that was very, very complicated with lots of different casks then we would maybe follow the same logic of An Oa and it would make sense to try the whisky in this oak vat.

How does working at Ardbeg compare to working on spirits at Glenmorangie?

Everything is different, absolutely everything.

I always think of Glenmorangie as this beautiful drawing that you can easily add flourishes to. If you put Glenmorangie in a Sherry cask for two or three months you’ll already have a good idea of where it’s going and what it will end up like, is it going to take on a big sweetness or is it going to have more notes of red fruit, the spirit really does invite flavour in from different casks.

Whereas with Ardbeg you absolutely need to sledgehammer it to get it to take on any flavour. We bought some really special casks for Ardbeg and thought this is going to be amazing, then when we put it in the casks nothing changed. It’s just such a hardy, raw and intense spirit. I think it’s almost like with Ardbeg you are begging it to take on any flavour, while with Glenmorangie you are begging it to chill out and not take on all the flavours so quickly.

Do you think either Ardbeg or Glenmorangie should be used in cocktails?

I am an absolute convert, there must be an interview somewhere where I say Scotch in cocktails is rubbish but I think that’s because the first single malt and Scotch cocktails I was drinking were just horrific.

I had a cocktail last night from the Ham Yard in Soho made with a different Islay smoky whisky, so I had that cocktail but asked them to make it with Ardbeg. It was Sherry based and served quite short and it was just brilliant, it was a great way to enjoy Ardbeg.

An Ardbeg Sour is also great and so is an Ardbeg Bloody Mary, it sounds really random but it really does work, if you’ve never had one you need to get on it.
Glenmorangie I think lends itself to making great cocktails because there’s quite distinctive flavour profiles, Glenmorangie Original has every flavour in the book except smoke so there’s lots of things to play off.

Have cocktails helped bring in a new wave of Scotch whisky drinkers?

Definitely, but I think that could be said for all spirits at different points in time.

With Scotch though, we’ll have events where there’s people that have been drinking whisky their entire life and they will turn their noses up at cocktails, which is fine. But there’s also a lot of people that will come to these events that have never tried whisky before and they’ll say that what they really, really liked was this cocktail.

I think cocktails are a definite way for some people to get into whisky.

What do you think the next year will hold for Ardbeg and Glenmorangie?

More of the same, I hope. It has been an awesome year, getting to make Glenmorangie Astar and releasing that and making An Oa has been a real labour of love for the last three years.

I think the most important thing next year is that we’ve made An Oa and its going great, but it’s a permanent expression so next year is all about making sure every batch of it is as good as the first.

Apart from that challenge it’s just more of the same, seeing what casks we can get our hands, what innovations can we have and how can I learn one more percent from Bill. Because if I’m at 95% now, it really will move at that pace as it’s the really hard stuff that is left to learn.
How does it feel prepping to take over from Dr Bill?
Maybe it should be nerve wracking but it just feels brilliant.

Since I got into the whisky industry I knew where I wanted to be. The way I see it, Bill is going to be here for a long time and I have still got so much time to learn from him, so the longer he stays the more assured my success in the role will be.

Eventually Bill will move on and it will be tough, there’s some people that never want Bill to leave and they will require a lot of convincing. But we will still have the same distilleries and the same people, I still have this huge inventory of casks of that Bill has left for me to work with.

And anyway, even when he does go, I know where he lives so I can track him down with a couple of free drams if I need any advice.