Following the launch of Monkey Shoulder Smokey Monkey, Amy Hopkins takes a look at the phenomenon of traditionally unpeated Scotch whiskies moving into smoky territory – but warns that peated innovation must be tackled sensibly. 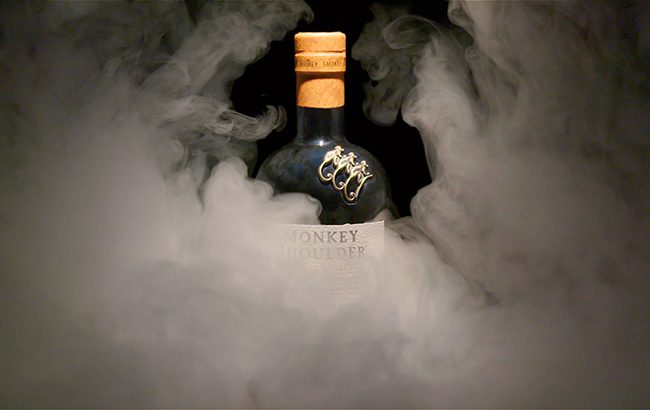 When William Grant & Sons unveiled Monkey Shoulder Smokey Monkey at the start of this month, the group insinuated that it had a less-than-impressed view of the current peated Scotch whisky market.

“Smokey Monkey has been created largely because leading bartenders from across the world asked us to,” said Joe Petch, global brand ambassador for Monkey Shoulder. “We felt it was an opportunity to give something back to those who have supported Monkey Shoulder from the beginning, which is why it’s just for them to start with.

“We’ve also enjoyed mixing up the world of peated malt – and quite frankly, it needed that.”

Innovation and newness has arguably been missing from a large portion of the peated Scotch segment for some time, however a number of traditionally unpeated brands are catching consumer attention by releasing smoky expressions.

Monkey Shoulder’s single malt stablemate The Balvenie expanded its small range of peated expressions with the launch of The Balvenie Peated Triple Cask Aged 14 Years in TR earlier this year.

In September last year, Chivas Brothers expanded its Scapa Scotch line with the addition of a Scapa Glansa, the first peated from the island distillery. A number of other traditionally unpeated brands have embraced a smoky twist in recent years – including GlenDronach, The Macallan, and The Glenlivet. See this article published by SB in 2015 for more.

The peat craze has even spread beyond Scotch and into other spirit categories: in November last year, New York’s Kings County distillery claimed to have created the “world’s only” peated Bourbon, while Portobello Road Gin embraced an experimental mindset with the launch of an expression made using peated juniper.

For many Scotch brands, the use of peat will hark back to their origins, as historically peat was prolifically used across the industry to dry malt. Therefore, such limited editions will tie in nicely to many brands’ communication campaigns centring around history and provenance.

Furthermore, as consumers become more willing to explore, there is a greater opportunity for a new generation of drinkers to become acquainted with peaty profiles.

But while peat is experiencing a renewed moment in whisky, producers should take care to avoid simply capitalising on a trend without the appropriate thought and consideration behind their products.

Peat sourced from different areas can have a wide variety of flavours, and while it can create a smooth, fresh and moreish whisky, the widespread profile is undeniably powerful. Consumers are intrigued to taste a peated version of their favourite whiskies, and as such the bottlings need to retain distinguishable and recognisable qualities.

Distillers should be mindful of jumping on a peated bandwagon, and ensure smoky innovation remains sensible and thoughtful.