A local shopkeeper in Connemara has claimed he is a victim of “corporate bullying” in a long-running trademark dispute with Beam Suntory over his ‘Conn O’Mara’ logo and character. 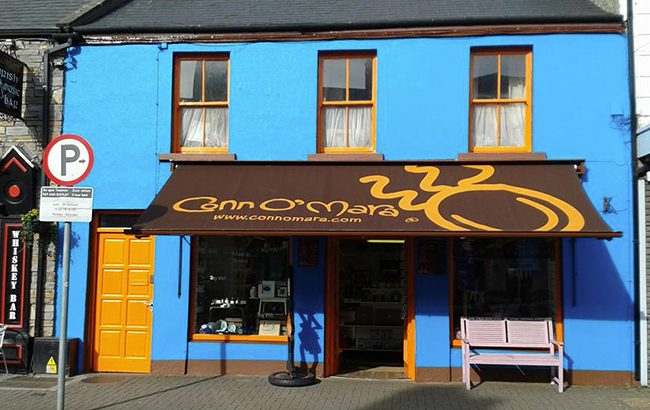 Leo Mansfield, who owns and runs the Conn O’Mara outdoor store in Clifden, County Galway, first registered the ‘Conn O’Mara’ mark in 2009 after developing the “light-hearted, fictional” Conn O’Mara character. In 2015 he says he planned to release a craft beer carrying the logo.

Beam Suntory’s Cooley Distillery filed an objected to the trademark in February 2016, issuing Mansfield with a Notice of Opposition.

Cooley Distillery claimed that products under the ‘Conn O’Mara’ mark could be confused with its own Connemara Irish whiskey products.

“I am appalled by the idea that Cooley Distillery would attempt to trademark ‘Connemara’,” Mansfield said in his counter statement seen by The Spirits Business.

“Connemara is the world renowned geographical area of outstanding natural beauty in which I live and do business. If Cooley Distillery’s intent is to stifle local commercial activity and deny the use of the geographical name of the area to goods and services from the area, then I am outraged.”

A Beam Suntory spokesperson confirmed it had opposed the ‘Conn O’Mara’ trademark, adding “we are confident in our position”.

The dispute has now moved to a hearing stage.

Mansfield told The Spirits Business he decided to “go public” with his point of view now because he was “fed up” with the lengthy process.

“I have no interest in making whiskey, I just want to make a craft beer and maybe a cider,” he said.

He added that local bars have decided to get behind him “and will be contacting the reps”.

The spirits industry is awash with corporate feuds – often over trademarks. In March 2016, we took a look at the 10 fiercest fights to take hold across the sector.