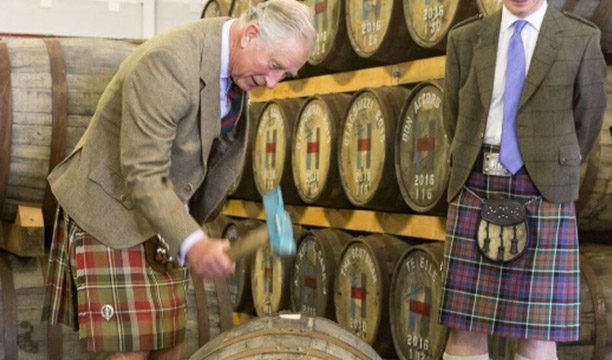 The Isle of Harris Distillery had a special visit from royalty on Tuesday when Prince Charles, also known as Lord of the Isles, tried a dram of blends and also sealed a cask of single malt whisky on his visit. Wearing a green kilt in Lord of the Isles tartan, the prince earlier visited the Royal National Mod – the annual celebration of Gaelic culture – in Stornoway on neighbouring Lewis. 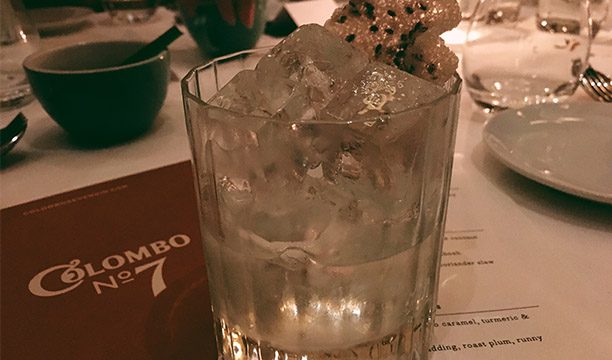 On Monday, SB‘s news, web and social editor, Annie Hayes, indulged at a Sri Lankan banquet hosted by noted bartender Ryan Chetiyawardana – aka, Mr Lyan – at The Modern Pantry in Finsbury Square. Each delicious course was paired with a cocktail featuring Sri Lankan gin, Colombo No. 7, devised by Chetiyawardana himself. Pictured above is the Gin Old Fashioned, which was served alongside sharing desserts of pineapple tart tatin and wattalapam bread and butter pudding. 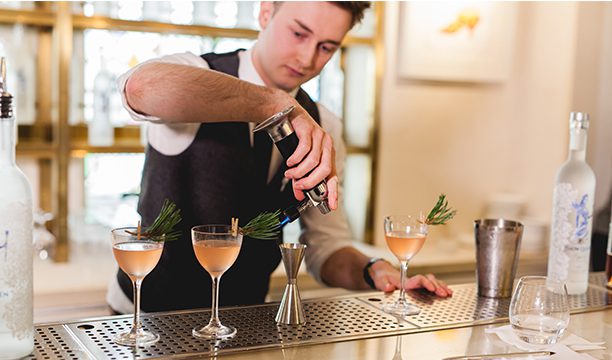 The grand final of the Snow Queen Martini Masters 2016 took place on Monday at The Club at The Ivy. After an intense round, Kieran Grieves of Bonbar in Newcastle beat out nine other competitors to be crowned champion with his cocktail ‘Dining with Nature’, inspired by Kazakh landscape, Snow Queen Vodka’s hometown. 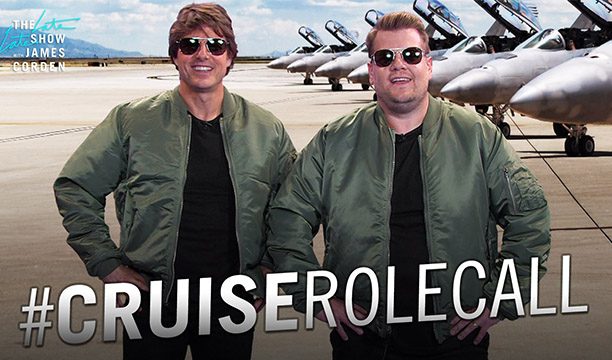 On Wednesday evening, Tom Cruise reenacted his role in iconic eighties film Cocktail as bartender Brian Flanagan on The Late Late Show with James Corden. Cruise and Corden donned aprons and cocktail shakers for the reenactment as part of a eight-minute speed-round of Cruise’s most popular roles. 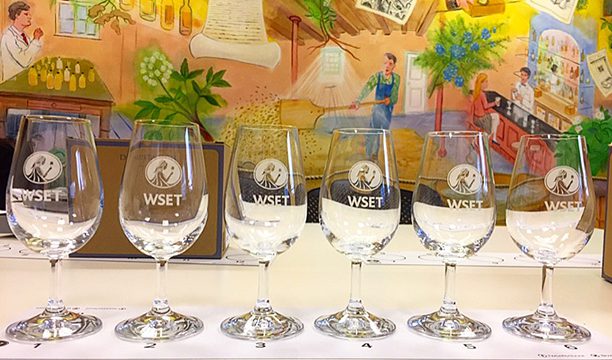 From Tuesday to Thursday this week, our editor Kristiane Sherry undertook the WSET Level 2 Award in Spirits. The intense course challenges its students on production methods, characteristics of spirits and liqueurs and provides a systematic approach to tasting. A four-week wait for the results lies ahead – good luck, Kristy! 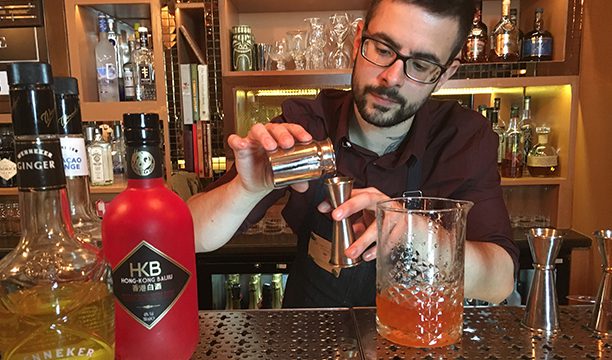 On Tuesday, the semi-final of The Swizzle Masters 2016 took place at Demon and Wise in London – check out the November issue of The Spirits Business for full details of the afternoon’s events. 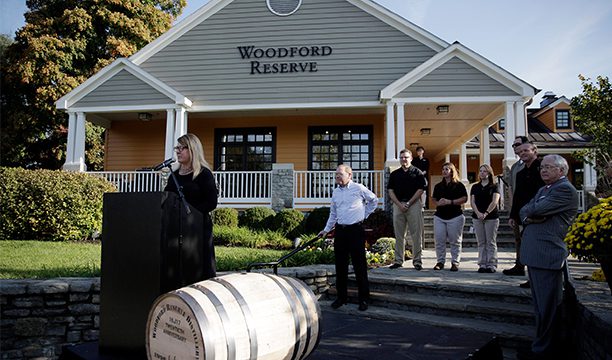 On Monday, Woodford Reserve celebrated its 20th anniversary with a press conference at the Woodford Reserve Distillery. The anniversary was honoured with reminiscent remarks from Paul Varga, Brown-Forman CEO, Chris Morris, master distiller and Don Parkinson, secretary of tourism arts and heritage cabinet. The ceremony celebrated Woodford Reserve’s accomplishments of the past two decades and concluded with a ceremonial barrel signing and toast to the next 20 years. 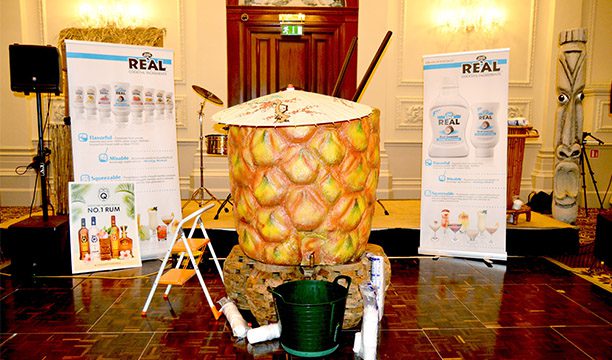 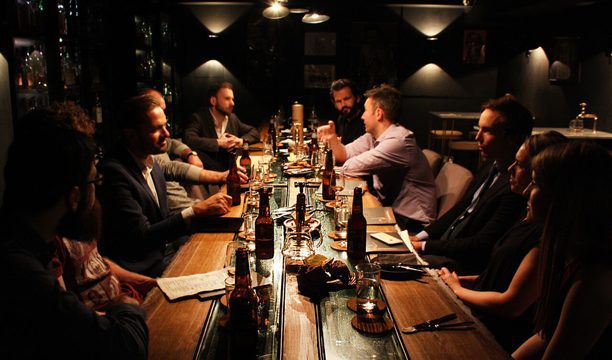 Monday also saw R&B Distillers host a whisky tasting at Black Rock in London, where Chris Hoban from the brand introduced a set pair of new serves for the Raasay While We Wait single malt. The first cocktail was a twist on the classic Rob Roy – a mix of While We Wait, sweet vermouth, peychauds bitters and cabernet Sauvignon vinegar, while the second serve comprised While We Wait whisky on ice with peat from the Isle of Raasay and black pepper hydrosoil in a highball glass. 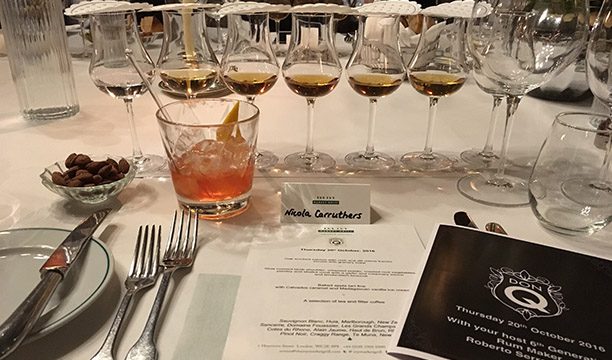 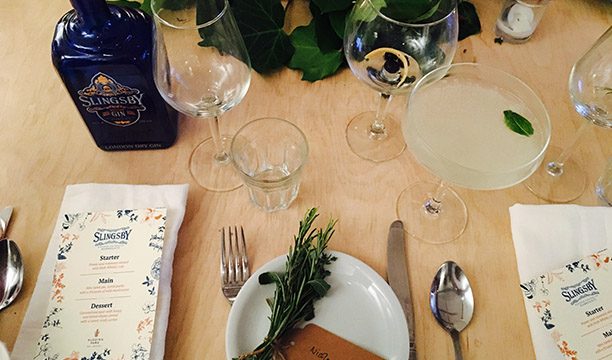 On Monday, Spirit of Harrogate held a botanical dinner and cocktail pairing made with its Slingsby Gin brand at the Carousel in London. The venue was turned into a botanical garden, inspired by the plants used to create the gin. 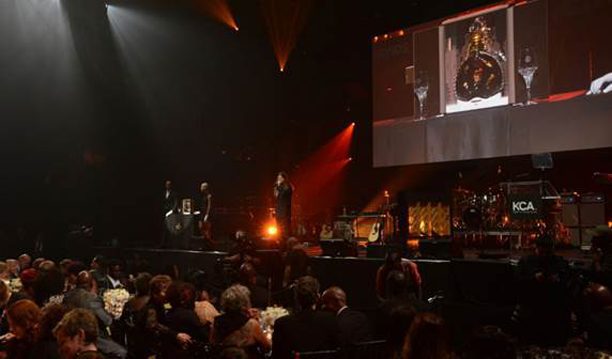 On Wednesday Keep a Child Alive’s 13th Annual Black Ball fundraiser gala was held at the Hammerstein Ballroom, hosted by Alicia Keys. Louis XIII Cognac was a major highlight of the live auction due to the sale of Louis XIII Legacy – a limited-edition magnum decanter, hand-signed by the last four generations of LOUIS XIII Cellar Masters. The lot – which included the decanter, a trip to France to collect the decanter from current cellar master Baptiste Loiseau, a five-star hotel stay in Paris, a House of Louis XIII visit, and a VIP experience with the brand at the Cannes Film Festival – was sold twice for US$91,000 each, raising US$182,000 for the charity. 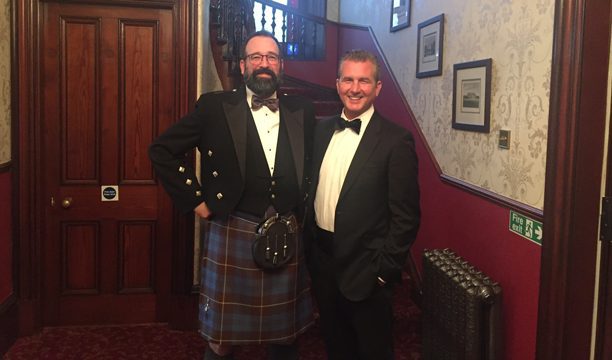 Founder of The Whisky Lounge Eddie Ludlow has been made a Keeper of the Quaich – the highest accolade available for contribution to the Scotch Whisky industry. As the founder of The Whisky Lounge – the UK’s only nationwide whisky festival, tasting schools and trips business, he has been praised for creating a whole new generation of whisky drinkers in the UK. Eddie said: “This is incredibly special for me, I am honestly thrilled. I started The Whisky Lounge to bring the spirit I love to a wide variety of people, a mission I’m truly passionate about, and to be recognised for my work is an honour”. 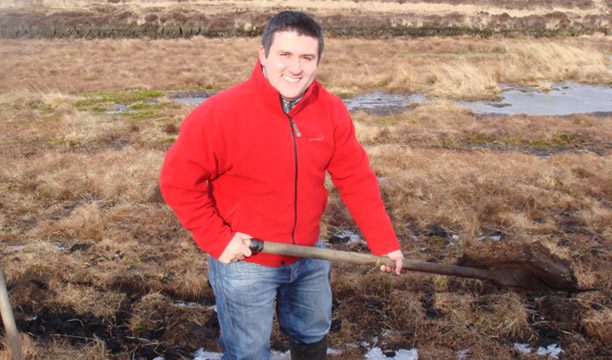 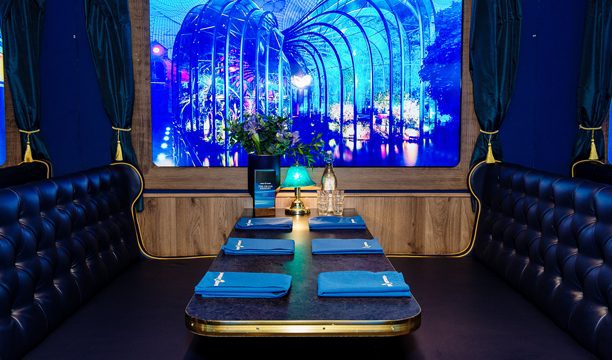 On Monday, Bacardi launched The Grand Journey at The Bike Shed in London – an immersive experience inspired by the 10 botanical locations used to create Bombay Sapphire. The journey sees consumers virtually travel from Morocco to Murcia, Spain to Saxony with a cast of characters. Serves and taster dishes created by The Robin Collective are presented in a multi-sensory manner, meaning that moving images are projected onto the surrounding walls; music, fragrance and lighting match the individual offerings; and the service involves mini theatrical performances from staff. 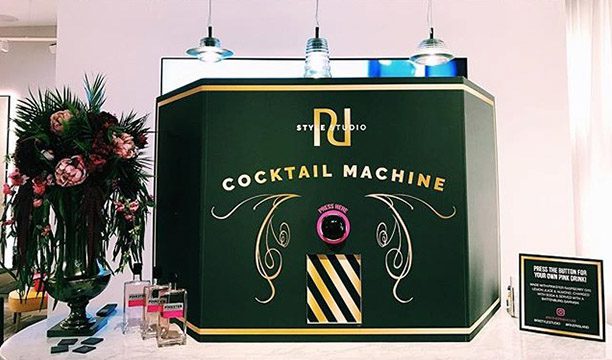 Last night was the launch of The Pink House Bar #RIXThePinkHouse at The River Island Style Studio on London’s Oxford Street, which offered a
complimentary, personalised shopping and styling service. Check out the cocktail machine which served Pinkster gin accompanied by billows of dry ice and topped with a slice of Battenberg cake. 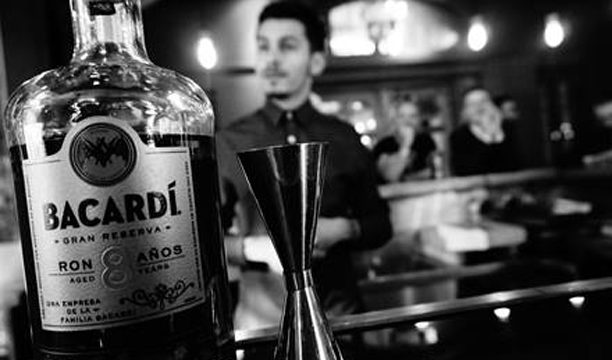 Following a series of regional heats held across the UK, Bacardi has announced the bartenders shortlisted to compete in the Northern European final of its 2017 Bacardi Legacy Cocktail Competition. The six UK finalists whose recipes made a real impression on the panel of judges are Ben Alcock from Her Majesties Secret Service, Bristol; Chris Edwards from Filter & Fox, Liverpool; Joe Harper from The Century, Gleneagles; Roisin Mc Erlean from Rita’s, Belfast; Geoff Robinson from Seven Tales, London; and Dan Berger from Ace Hotel, London. 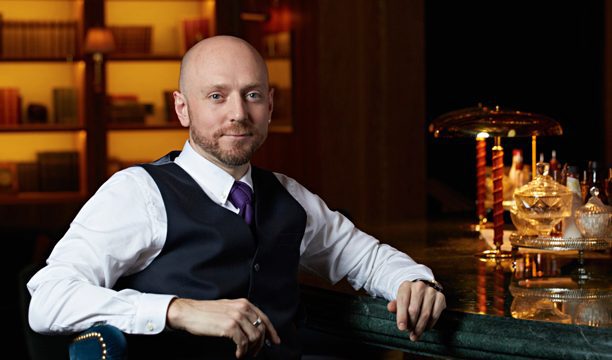 On Tuesday, Ben Manchester of K Bar at The Kensington was awarded Bar Manager of the Year at Boutique Hotelier Awards. Ben joined the team at The Kensington with over 10 years’ experience in the hospitality industry and oversaw the bar launch and unveiling of a new cocktail list back in February 2016. Zoe Monk, editor of Boutique Hotelier, said: “The judges unanimously decided that Ben was a very worthy winner of our Bar Manager of the Year award. They specifically appreciated how he had taken the bar from a relatively unknown hotel addition, to a booming trendy London watering hole, visited by some of the capital’s elite and respected across the whole industry. They were also impressed by the new innovations and ideas Ben brings to the business to increase profit and ultimately keeps customers coming back for more.” 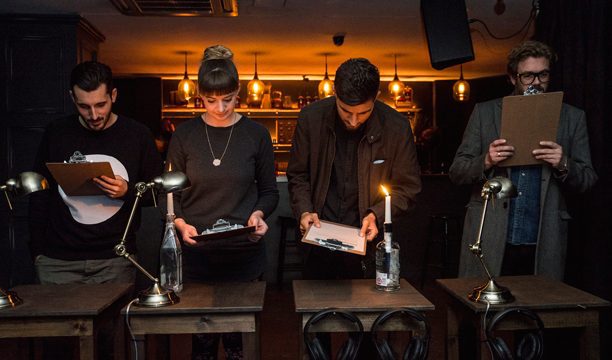 Jura Whisky has brought its remote island home to the city of London in a new interactive experience, tested last week by SB’s Annie Hayes. ‘The Isle of the Unexpected’ invites Londoners to join a mystery adventure to help a fictional film director, Eric, find the inspiration he needs to finish his script. The answer lies on the island, which ticket holders can access through a secret door in The Looking Glass bar in Shoreditch. Guests can expect to discover the island over a dram or two as they are guided by audio headset through physical sets, experience virtual reality flight and hunt for clues. 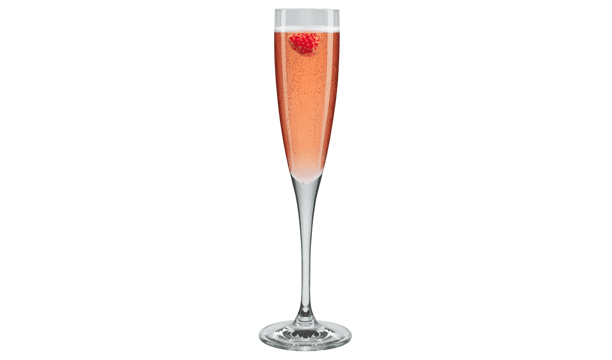 Chambord joined the exhibitor line up for 2016’s Independent Hotel Show on 18-19 October at the Olympia West, London. The brand showcased its ‘Just Add Chambord’ below the line campaign, which launched earlier this year. The platform was brought to life to show the on-trade, including hoteliers, transform a glass of Champagne or sparkling wine into a cocktail – by adding Chambord to create the Chambord Royale. 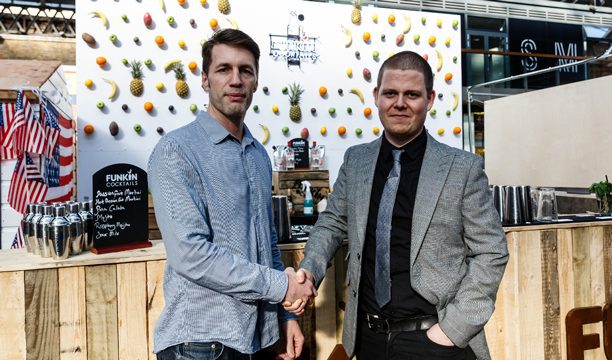