Return to growth ‘on horizon’ for Scotch

The decline of the Scotch whisky industry is “slowing”, with exports to the troubled Chinese market leaping 46% in the first half of this year.

According to latest figures released by the Scotch Whisky Association (SWA), despite the persistence of economic headwinds and political uncertainty, “encouraging trends” are starting to develop in several key markets.

In total, the value of Scotch exports dropped by 3% to £1.7 billion in the first half of this year, compared to a fall of 11% in the first six months of last year.

In terms of volume, exports dropped 3% to the equivalent of 517m bottles, compared to a 6% decline during the same period in 2014.

The SWA notes that premium blends and single malt Scotch whisky “became ever more popular”, with the latter experiencing a 5% value increase to £406m.

After a decade of consistent growth, Scotch whisky exports first started to decline two years ago, impacted by numerous challenges in the emerging markets.

“We’re starting to see some strong signals for growth and we continue to believe the long-term prospects for Scotch whisky remain good,” said David Frost, chief executive of the SWA. “This is reflected in the large number of new distilleries opening, with half a dozen starting production in the last year or so.

“The growth of single malt exports shows that premium products are ever more popular. We had a decade of record growth, there was then a decline in exports in recent years largely because of the slowdown in the emerging markets, but signs of improvement are on the horizon.”

Earlier this year, Frost predicted that the Scotch export market will return to growth in 2016.

“We will continue to push for more open access to markets by pressing for the removal of barriers such as high tariffs and unfair levels of taxation,” he added. “Scotch needs a level playing field, in the UK and overseas, to continue to be a Scottish and British success story.”

The market for Scotch in China returned to growth despite the country’s ongoing austerity measures, with direct exports increasing an enormous 46% to £22m due to demand for blended variants. In 2013, the country was knocked out of the top 20 exports markets for Scotch whisky, a position it has now managed to regain in terms of both value and volume.

The SWA notes that trading conditions remain “volatile” in other markets, with volume exports plummeting almost 30% in Brazil and 8% in India.

While Germany was hit in terms of value and volume, Poland and Turkey saw double-digit growth.

Click through to the following pages to see the top 20 export markets for Scotch whisky, by value and volume. 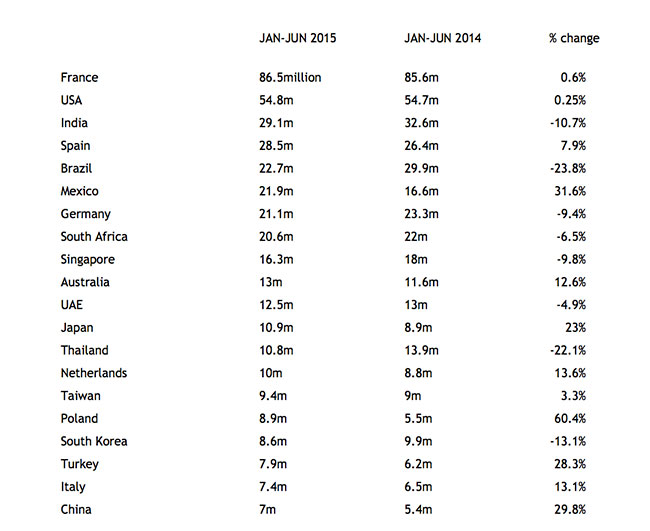 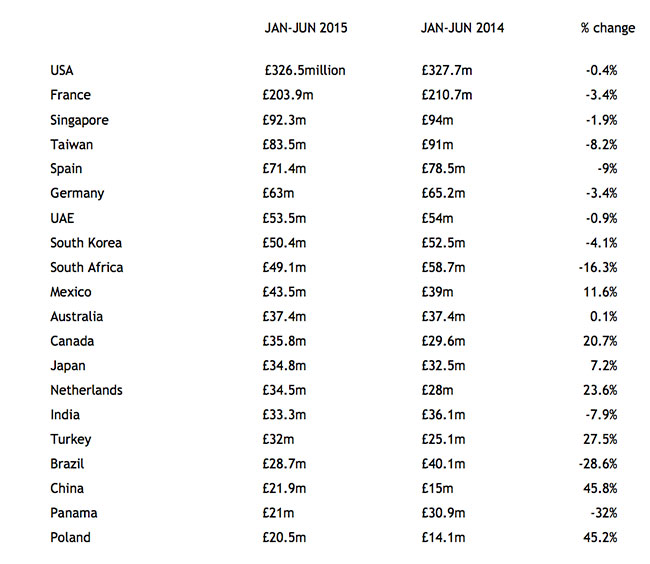