Bottles of Ron Burgundy Scotch – called Great Odin’s Raven – will be available in the UK early next year after a promotional partnership between Jameson and Anchorman 2 comes to an end, say the film’s producers Paramount Pictures.

Following the release of Great Odin’s Raven in the US this month, rumours surrounding a potential UK launch have been rife.

However, The Spirits Business has learned that despite numerous reports in the UK press suggesting the Scotch would also be released in the UK in December, the bottle will not be available until February 2014 when a promotional partnership between Jameson Irish whiskey and Paramount, producers of Anchorman 2: The Legend Continues, is completed.

A representative of Paramount emphasised that Great Odin’s Raven would “definitely not” hit UK shelves this year, but a release in February was “very likely”.

As part of the partnership Jameson announced that its Jameson Cult Film Club will host preview screenings of the film around the country prior to its official release.

The off-trade promotion commenced in early September with over 80,000 bottles of Jameson offering consumers the chance to win a spot at an “Anchorman experience” in New York. On-trade activity included a Jameson Cult Cocktail Competition, which has taken place at independent bars across the UK. 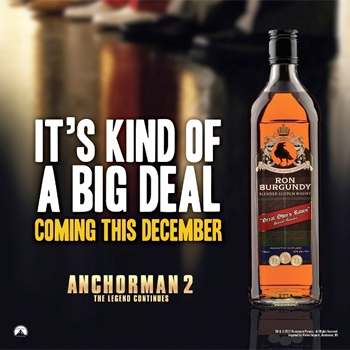 Since the Jameson partnership is UK-only, Great Odin’s Raven is already available to US consumers.

The Scotch, inspired by lead anchor in Anchorman Ron Burgundy’s penchant for the spirit, of which he claims, “I love Scotch. Scotchy, Scotch, Scotch”, has been bottled by Riviera Imports and will be provided by Drinks Supermarket in the UK.

Produced by St Andrew’s Distillery, Great Odin’s Raven is currently available in the US at and RRP of US$25.