Age-your-own whiskey kits are becoming increasingly popular among American distilleries so we’ve scoured far and wide across the States to find the best (and most interesting) ones on the market.

Each set provides you with the tools you need to become a master distiller from the comforts of your own home. Whether you prefer single malt, blended or rye, there is an ageing kit to suit your preferences.

The small barrels reduce the ageing time compared to the years it takes in standard-size barrels. Some only need two-four weeks to age while others can take between three and six months, and although some distilleries have claimed small barrels such as these aren’t likely to produce an award-winning whisky, each and every one allows you to see and taste the transformation of your whiskey as it ages.

One company’s selection of kits even comes with ‘whisky essence’ to help buyers create the “finest blend of whiskey aged to perfection”.

And if whiskey is not your choice of poison, why not try ageing your own rum, brandy or even cocktails?

Have you tried any age-your-own barrel kits? Do you have any recipes to recommend? Share your experiences in a comment below. 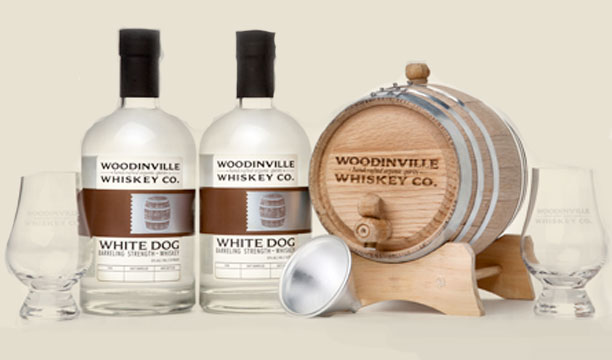 The Woodinville Whiskey Co.’s age-your-own whiskey kit lets you see the transformation of the whiskey from clear to brown and experience the changing flavours along the way. This kit includes two 750ml bottles of 110 proof (55% abv) white dog, a two-litre ageing barrel (which Woodinville claims can be reused several times), a pouring funnel, two tasting glasses and step-by-step instructions. The small barrel size accelerates the ageing process producing an aged whiskey in just 3-6 months. This kit retails at US$149.99. 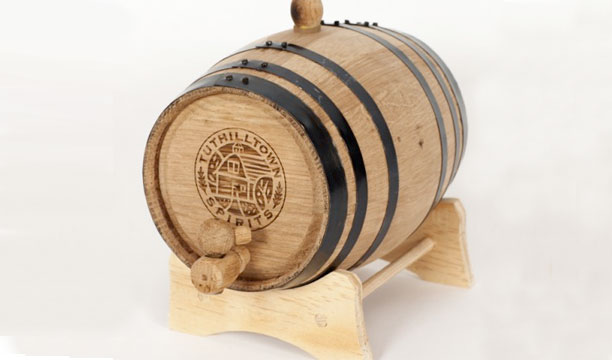 Tuthilltown offers custom-made barrels in various capacities starting at one litre. Hand crafted from American white oak, each barrel has the Tuthilltown Distillery logo engraved onto its front end. All barrels have a medium toast and come complete with the stand, bung and wooden spigot, perfect for ageing Tequila, brandy, whiskey, Scotch, Bourbon and Cognac. The custom-made one-litre barrel is priced at $60. 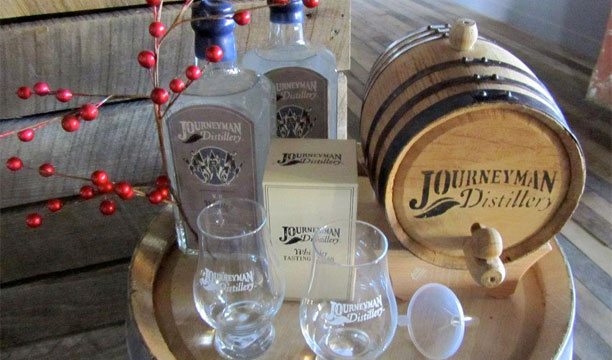 Journeyman’s age-your-own whiskey kit is available to buy from the Journeyman Distillery in Three Oaks, Michigan. The home ageing kit, which comes in a box made from old barn wood, is complete with two bottles of white whiskey, two whiskey-tasting glasses and one two-litre oak barrel. The process is simple, just pour the whiskey into the barrel and give it three months to age. Journeyman’s kit retails at US$149. 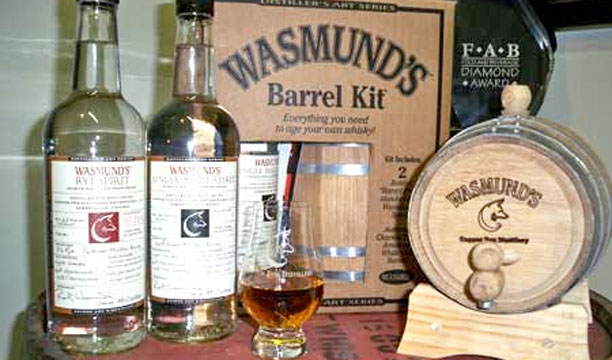 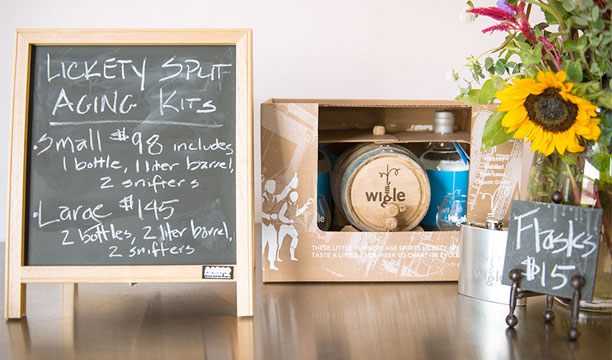 Wigle Whiskey has created a beautifully crafted barrel to allow you to age Wigle Whiskey yourself. The kit is available in two sizes, either a one litre or a two litre toasted oak barrel. The one litre kit comes with two snifter glasses and a bottle of whiskey, while the two litre kit comes with two snifter glasses and two bottles of whiskey. The Wigle barrels are also designed for use with several batches, and then some with other liquids such as cocktails, bitters and maple syrup. 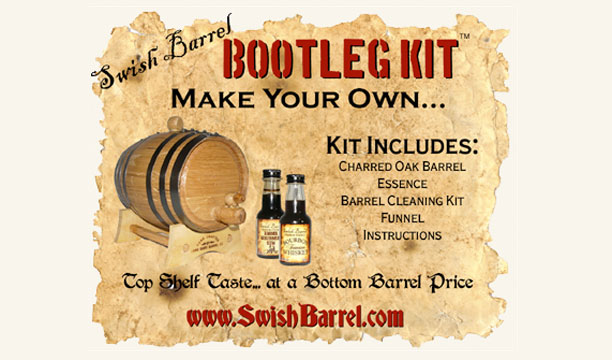 Thousand Oaks Barrel Co. have an abundance of age-your-own kits for purchase, although none of them are supplied with white dog. The Swish Barrel products are designed to be cured in the first instance by filling them with ‘storing tablets’ and water. After three days, consumers should empty the barrel, fill it with their choice of white dog plus a bottle of supplied ‘essence’ and shake to mix thoroughly. Thousand Oaks suggests ageing the ‘whiskey’ for at least two weeks. 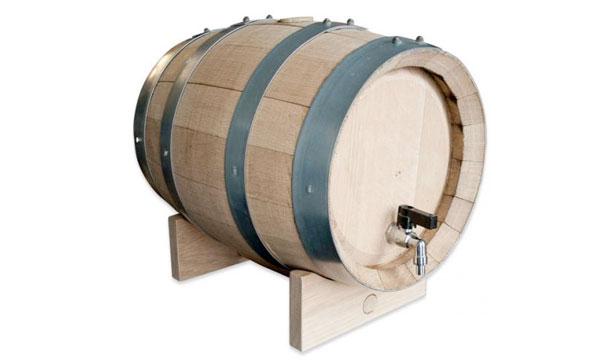 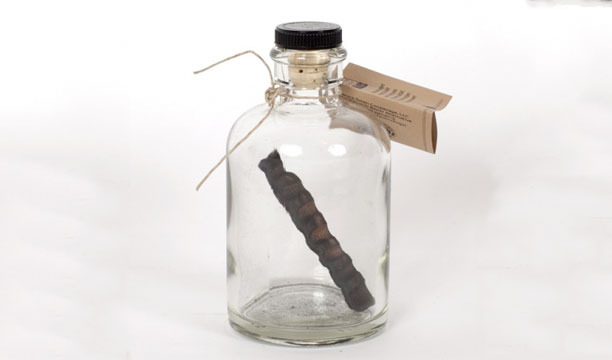 Tuthilltown Spirits have also produced this cocktail ageing kit for an absolute steal at just US$12.50. This particular barrel-aged cocktail kit contains a 375ml glass bottle, complete with instructions, plus one of its honeycomb staves enabling you to give your favourite white cocktail an American oak flavour.

Top of the Hill Distillery’s 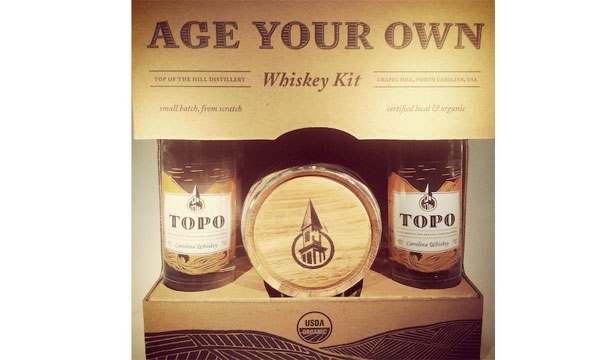 Scott Maitland, proprietor of Top of the Hill Distillery (TOPO), gives you the tools to brew your own whiskey at home with its age-your-own-whiskey kit, one of the newest kits on the market. TOPO’s age your own whiskey kit comes complete with two bottles of their 100% certified organic Carolina whiskey, stand, bung, tap and instructions to help you along the way. TOPO’s kit costs US$43.30. 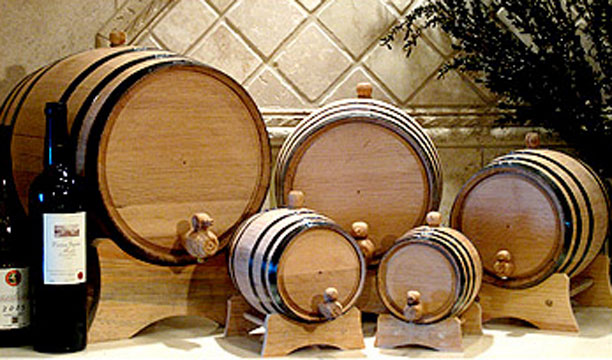 If you’re after something a little larger than those barrels provided above, try buying from Oak Barrels Ltd. They provide a range of barrels from one litre to 20 litres, with a range of different hoop styles. The barrels don’t come supplied with any alcohol, but are charred with a medium toast to impart a slightly smoky flavour.