Detroit-based Resist Spirits has responded to accusations of sexist marketing levelled against its Fkng Bourbon brand.

Fkng Bourbon, which stands for ‘For Kings Not Gods’, faced backlash from the trade last week for marketing materials on its website and social media platforms said to perpetuate gender stereotypes.

One Twitter post that was called out features a woman lying behind a bottle of Fkng Bourbon, with the caption: ‘Be someone’s Bourbon rather than everybody’s cup of tea.’

The tweet has since been deleted by the brand.

Whisky journalist Becky Paskin was among the members of the trade to draw attention to the posts. Paskin, founder of the Our Whisky Foundation, which advocates for gender parity in whisky marketing, told The Spirits Business: “The objectification and sexualisation of women in any form of alcohol marketing has damaging, real-world consequences. This is particularly true in an industry such as whisky that has long been considered a ‘man’s world’.

“Not only does it undermine female authority, reducing us to little more than objects, it perpetuates an image of whisky being the elite drink of the gentleman’s club.

“The global whisky industry has progressed far beyond this kind of archaic, sexist marketing, so it’s incredibly disappointing to see a new brand enter the market with this stance.” 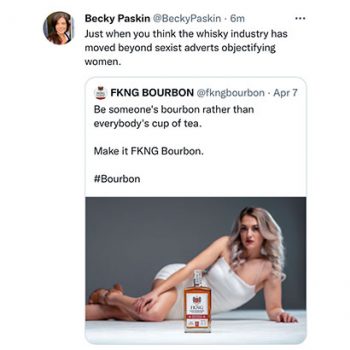 Greg Martinez Jr, founder, president and CEO of Resist Spirits, commented: “Resist Spirits is a company that creates brands that are aimed at inspiring and motivating an ethos of achieving success; promoting a lifestyle of personal development; making one’s goals a priority; and, ultimately, celebrating victories and battles.

“In our ads and marketing materials we seek to promote images of strong, independent, confident, warrior-minded women and men. Many of our ads are created by women and women-owned companies. All are meant to exude this mindset in a classic, sophisticated, upscale way.

“We hope individuals will keep an open mind regarding our positive intentions and the spirit in which they are communicated.”

Last month, a report revealed that just 10% of women believe there has been significant positive change in the alcohol industry’s attitude towards female employees over the past five years.