After a long dependence on the on-trade, cocktail bitters were forced to change course last year. As The Spirits Business reports, they have become a must-have in homes worldwide thanks to the rise of premium do-it-yourself serves. 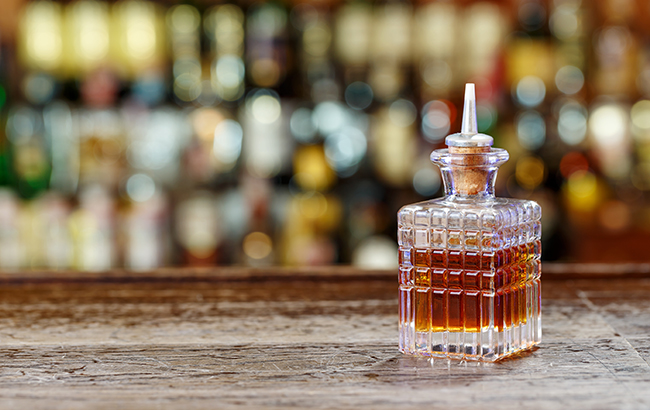 These are clearly very tough times for the hospitality business in general, and not everybody will make it,” says Stephan Berg, co‐founder of The Bitter Truth, about the bars that may never reopen. But for those that do manage to cling on until the Covid‐19 vaccine has worked its magic, he predicts a boom, saying: “Once we get over all this, people will be so hungry to go out, it will just explode. You can probably compare it with the ending of Prohibition.”

Founded in Germany in 2006, The Bitter Truth has become a leading supplier of cocktail bitters, which it divides into three styles: aromatic, fruit and savoury. Being distributed globally has helped the company through the pandemic because while bars would close in some countries, they would reopen in others.

“But we realised from markets where we had a pretty strong shutdown, mainly in Europe, that the business had shifted,” says Berg. “People who couldn’t walk into their local bar would start making drinks at home.”

The necessary knowledge wasn’t acquired overnight, as he explains: “We have been educating the public for the past 15 years about how to make cocktails, and the media has also played a part.”

On social media, Nick Williamson, marketing director at Campari UK, mentions American actor Stanley Tucci, who posted a series of YouTube cocktail classes during the first lockdown. Each was just a minute long, but the one on the Negroni went viral and caused a ripple in Campari’s sales. Overall, the brand’s volumes jumped 46% by in the UK in the year to September 2020, while sister brand Aperol rose by 23%, claims Williamson.

Any losses in the on‐trade were more than offset by a surge in retail, where both brands enjoy strong distribution. The perennial orange wave of the Aperol Spritz that for some signifies spring was less visible last year, but as bars went into lockdown, the drink simply migrated to people’s homes. Campari’s signature serve – the Negroni – requires three alcoholic ingredients rather than the two needed for a Spritz, but with Tucci on hand and countless online recipes available, most people got the hang of it. According to online marketplace On Buy, the Negroni clocked up 35,000 searches in March 2020, making it the fourth most Googled cocktail in the UK.

Angostura Bitters – which produces an orange expression, plus a new Cocoa Bitters that launched last year – is the granddaddy of aromatic bitters, with a 70%‐plus share of the category, estimates Angostura Holdings’ acting CEO, Ian Forbes. With cocktails, he says: “In the spirits realm, the lead is the Old Fashioned, and in the low‐ABV realm the lead is lemon, lime and bitters.” Known as LLB, the latter is popular in Australia, and loved as the Chapman in Nigeria, and Rock Shandy in South Africa. The low‐and‐no alcohol trend is something “we’re studying very closely”, says Forbes.

As is Jana Ritter, Sazerac’s brand manager for bitters and New Orleans speciality brands, who looks after Peychaud’s Aromatic Bitters. She talks of “people making their own little mocktails”, and says: “There’s a lot of creativity going on with bitters in general, and where a bottle of Peychaud’s may have lasted someone a year, you’re now seeing people have repeat purchases month after month. It’s because they are educating themselves, watching videos and learning how to use it.”

To encourage trials, a small 2oz size (57ml) was launched recently “to capture that consumer who’s maybe still intimidated”, she explains. Angostura Bitters has gone even smaller with its 3.5ml miniature, enough for two drinks and sold in Old Fashioned cocktail kits. Both brands have seen the same switch to retail as Campari. “In 2020 we saw a really big increase in consumers looking for bitters to have in their home bar to make cocktails,” says Ritter. At first there was an issue with visibility.

“In retail stores, bitters sometimes get lost because they get put with things like Margarita salts and mixers, but now we’re seeing stores put them next to premium spirits,” she says. “It’s interesting because when you put a bottle of Peychaud’s next to a bottle of premium Bourbon, consumers make that instant connection of ‘oh, I can make an Old Fashioned with it’.”

Of course, she’s delighted when they do, for this is the cocktail the brand likes to partner with, given its popularity. “The Sazerac cocktail is another very popular one that calls specifically for Peychaud’s,” Ritter adds.

Berg is happy to agree on the Sazerac cocktail, but is less convinced by her first point. “I don’t see people replacing traditional aromatic bitters with Peychaud’s in an Old Fashioned,” he says.

Campari strives to keep a tight hold of its classic serve, with the mantra ‘No Negroni without Campari’, though inevitably people are curious to experiment the deeper they get into the cocktail. Those willing to try alternative bitters are being courted by Stefano Rangoni, CEO of Ca’ d’Or, in Franciacorta, Italy, who can offer the complete Negroni package.

As well as a gin brand and an Amaro Rangoni to replace the vermouth, he produces Rangoni Kingfisher Bitters from 11 local Alpine herbs, which in Italy retails for €25 (around US$30), a €10 premium on Campari. Rangoni says: “People are starting to get more interested in handmade, quality bitters, and with our product you get the flavour of the Alps with Alpine herbs and a more balsamic note.”

The brand has been requested by importers in Texas and New Jersey, and there are plans to launch a bitters‐based, high‐quality ready‐ to‐drink offering to surf the hard seltzer craze in the US.

Meanwhile, one thing that has helped all bitters pivot to the off‐trade has been the explosion in e‐commerce in 2020. “I talk to people in online sales here, and they’ve all doubled or trebled their business,” says Berg. “People try to avoid going out and want to stay in their bubble.”

In the US, Peychaud’s has seen volumes surge thanks to delivery platforms such as Drizly, and also on Amazon, where the laws are more relaxed compared with spirits because bitters are classified as a flavouring agent. This has also benefitted Angostura.

Throughout 2020 there was a boom in US bars offering cocktails to go as the rules were loosened, and by August the practice was allowed in more than 30 states.

The main beneficiary has been the Margarita, and thus Tequila, but Ritter says: “You have a lot of cocktail bars in the US that are known for riffs on classics, and what a lot of them are doing is creating a bottled mixer, often with Peychaud’s, which is packaged with the spirit. The consumer picks up the two bottles and when the time’s right, dims the lights, sorts out the music, gets behind the home bar and starts mixing.”

At its New Orleans cocktail museum, Sazerac hosts cocktail classes on Zoom. “We get up to 200 people attending at a time,” says Ritter. “And it’s global, so you could be on the 5pm class with people from LA, Florida, the UK and Australia.”

Campari UK created the Little Red Book of Classic Campari Cocktails as an online booklet, which was downloaded 32,000 times within a few weeks, according to Williamson. And a recipe book produced by Angostura Bitters sold out in supermarkets in Trinidad and Tobago where “even before bitters launched as a cocktail ingredient, Angostura was being used in cooking”, says Forbes. “Locally, you find bottles used to make omelettes and for seasoning steak, fish or chicken.” This dual use is something the brand is keen to promote in other markets like the UK, not least because being out in the kitchen rather than stuffed in a drinks cupboard boosts your visibility no end.

Denied our favourite bars, and with time on our hands during lockdown, we have learnt to mix drinks at home over the past 12 months, and people in the bitters category believe the trend will continue.

“It’s kind of like a social currency, if you think about it,” says Sazerac’s Ritter. “If you have friends over, whereas you might have opened a bottle of wine, now you might say ‘let me make you my Old Fashioned’.”

Others in the category agree that the trend for home‐grown cocktails will prove to be a lasting legacy of the pandemic. Add in the prospect of a boom in the on‐trade to rival the ending of Prohibition once the last lockdown is over, and the future for bitters looks remarkably sweet.