Romania’s Alexandrion Group has enjoyed success at home and overseas, with its products being popular in more than 50 countries. Here, we look at the history of the brand and how it plans for further success in the future.

With historic roots that stretch back to 1789, Alexandrion Group commands some of the most powerful brands in Romania. Combining heritage, tradition and experience, the company has built a global reputation for its exciting, high‐quality drinks offerings.

More than 20 years ago, Alexandrion Group took a major step towards solidifying its position in the drinks industry with the establishment of Alexandrion Distilleries. Nawaf Salameh, the founder and owner of Alexandrion Group, saw an opportunity to invest and become a major shareholder of the distillery that was producing the group’s flagship brand, Alexandrion, in Crete, Greece.

From there, Salameh’s ambitions grew, and he soon invested in 20 hectares of land in Pleaşa, Prahova County, Romania, where the building of the Alexandrion Distillery and cellars began.

With its highly flexible logistics operation model, capable of looking after complex product portfolios, the site is seen to be one of the most modern and efficient distilleries in southeast Europe. State‐of‐ the‐art technology has been installed for bottling, labelling and packaging, with the capacity to produce 42,000 litres of alcohol a year, and room for 3,500 oak casks to mature in the cellars.

In 2018, Alexandrion Group made another bold move to realise its global ambitions – the company opened a global office in Cyprus. This was followed by offices in São Paolo in Brazil, and now there are also offices and subsidiaries in Romania, the US, the UK and Greece.

By 2022, Alexandrion Group hopes it will be able to complete another company milestone: the construction of its first distillery in the US. The site will be located in Carmel, Mid‐Hudson Region, Putnam County, New York, and will feature a 12,000 sq m distillery, visitor centre and tasting rooms. The US distillery will create premium spirits designed for the US market, including American whiskey, Bourbon, gin, brandy and vodka, and it is hoped these products will eventually be exported to the 50 countries in which Alexandrion Group is already active.

Meanwhile, in Romania, Alexandrion Group plans to produce the first Romanian single malt whisky, and has launched the Single Malt Society, an online and offline community dedicated to single malt whisky fans such as Salameh himself, who is a Keeper of the Quaich.

In the wine world, Alexandrion Group boasts The Iconic Estate, following the acquisition of six companies from Halewood Romania in 2018. This purchase cemented Alexandrion Group’s position as one of the most revered Romanian wine producers and biggest bottled‐wine exporters in Romania, with approximately 60% of its annual production being sold abroad. The Iconic Estate has several locations for wine processing and bottling, including Ploiesti and Dealu Mare, and owns more than 200 hectares of vineyards in Dealu Mare and other wine regions.

The communities surrounding the sites are of great importance to Alexandrion Group, which led the firm to create the Alexandrion Foundation. Inspired by historical role models who supported culture and scientific development, the foundation focuses on three main pillars – culture, science, and sport – and backs numerous social, philanthropic and charitable initiatives. This work extends to the hospitality and tourism sectors, and further emphasises why Alexandrion Group is one of the most important players in the beverage industry, not just in Romania, but around the world.

A true leader in the Romanian spirits industry, Alexandrion represents flavour, history and tradition. Created at the Alexandrion Distilleries, the brandy is made from grapes sourced from the group’s vineyards in the Dealu Mare region. The wine distillate is matured in oak barrels in ideal cellar conditions before being blended with only the highest‐quality natural extracts. Named after Alexander the Great, Alexandrion was established in Greece during the late 1980s.

Today, the brand has grown and attracted a global audience, and is enjoyed by brandy lovers in more than 40 countries. The range comprises two core expressions: Alexandrion 5* and Alexandrion 7*.

In balmy temperatures, Alexandrion 5* is recommended mixed in cocktails or served neat over ice. As the winter months set in, a mug of warming Alexandrion Hot is the perfect way to enjoy both the 5* and 7* expressions.

There’s an important piece of history behind the Brâncoveanu brand. Described as the ‘pride of Alexandrion Group’, Brâncoveanu was created to celebrate 25 years of peace in Romania under the rule of Constantin Brâncoveanu. The vinars, or brandy, represents the traditional Romanian method of producing wine distillates.

Brâncoveanu vinars is made from specific vineyards situated across the 45th parallel, which 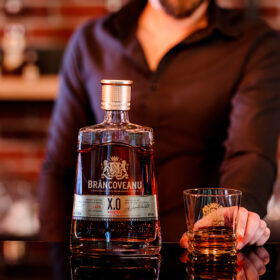 ensure only the finest quality grapes are used in production, in accordance with strict legal requirements.

“Brâncoveanu vinars is a noble product, a product that must be understood before being consumed,” said Stelios Savva, CEO of Alexandrion Group, in 2019 when the rebrand was unveiled in Paris. The revamped look was chosen to better communicate the brand’s premium quality, authenticity and craftsmanship.

The Brâncoveanu series is made up of three expressions: Brâncoveanu VS, Brâncoveanu VSOP and Brâncoveanu XO. The VS blend is matured for at least three years, and aims to inspire courage and dignity; the VSOP blend is aged for a minimum of five years, designed to inspire perseverance and determination; and the XO spends at least seven years maturing to deliver a deep, refined, delicate yet complex flavour, in keeping with its noble values.