The bar on London’s Southbank replaced Ryan Chetiyawardana’s award-winning cocktail den Dandelyan in the Sea Containers hotel when it opened its doors in March.

For it’s first menu, the bar created seven core ingredients that were each used in three “suggested” cocktails. The ingredients included Infinite Banana, said to be an exploration into the flavours of bananas; Onyx, a bespoke spirit made with Copenhagen-based Empirical Spirits; and Purple Pineapple, which was created to “restore the glamour” of the pineapple.

The bar’s second menu adds four new ingredients, each selected by the team at Lyaness to celebrate a particular flavour profile, fruit or ingredient.

First, ‘liqueur-style’ Peach Emoji is said to be a “full-bodied, complex ingredient” that uncovers the “flavours in peach which are usually missed”. In order to create an “elevated peach liqueur” the team at Lyaness roasted peach stones, liquidised peach flesh using enzymes and lacto-fermented the skins to create a liqueur with “marzipan and stone fruit” flavours.

Vegan Honey was made by replicating the honey-making process of bees. Using enzymes, the team produced its own range of inverted sugar syrups inspired by the flavour profiles of honeys from around the world.

The third new ingredient on the menu is Lyaness Tea-mooth, which was developed in collaboration with Henrietta Lovell of the Rare Tea Company. The team takes the Lyaness Rare Tea blend and puts it through a number of different processes such as fermentation before blending it to create an alcoholic ‘vermouth’ made entirely from tea.

Finally, Golden Levain was developed to explore the unifying flavour of yeast across Champagne, bread, pastry and beer. A syrup was made using sourdough starter. This was then mixed with miso and saké kasu before being baked. After, it was blitzed with sugar and water to make a syrup that has a “golden, toasty flavour”.

Alongside each ingredient on the menu, the Lyaness team has created three suggested serves that have been designed as guides for guests. Visitors to the London bar are also encouraged to use the bespoke ingredients to add new flavours to their favourite drinks.

Click through our gallery to find out more about the cocktails and ingredients on the new menu at Lyaness.

“Cooling and comforting – with a wonderfully rich balance” 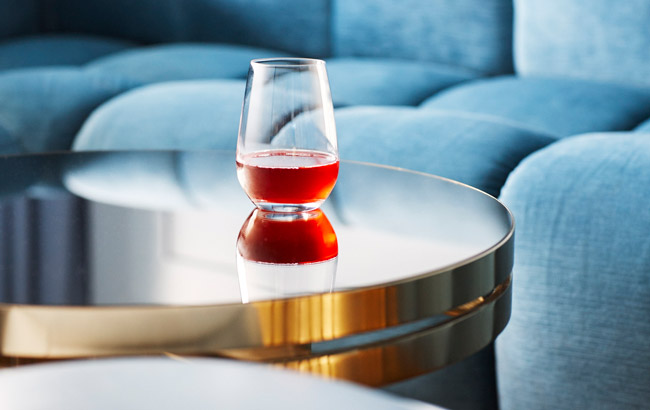 “A crisp, mineral wine sipper – pulling out all of the bright grassy notes of the Onyx”