Vodka’s resurgence – led by a focus on quality and terroir – has seen a wave of brands release exciting expressions. Our annual Masters competition highlights which ones to look out for.

For all its endeavours, somehow vodka still gets a bit of stick when it comes to ‘flavour’, either lambasted for its former sickly‐sweet fruit and confectionary days or criticised for its neutrality. But pay closer attention and you’ll soon realise the category is the in the midst of a ‘glow up’ as it moves to dissociate itself from its garish and flashy past and assume a new identity as a more ‘naturally’ flavoured spirit with premium credentials.

Assembling to assess the current state of the global category was a panel of expert spirits tasters, who met at the Baltic restaurant in Southwark, London, for a day of vodka sampling.

Split into three groups, the first panel was chaired by me, Melita Kiely, deputy editor of The Spirits Business magazine. I was joined by Dan Greifer, head bartender at Belmeis, Bryan Rodriguez, buyer at Harvey Nichols, and Damien O’Leary, operations manager at Ladies & Gentlemen.

The second panel was chaired by Amy Hopkins, editor of The Spirits Business, who was accompanied by Bernadette Pamplin, spirits writer and judge, and David T Smith, founder of the Craft Distilling Expo.

Heading the third and final panel of the day was Ben Lindsay, director of Garnish Communications, who judged alongside Tobias Gorn, award‐winning drinks specialist and writer, and Antony Moss, director of strategic planning at the WSET.

The first medal of the day was awarded to Russian Bear Vodka in the Standard flight after my panel deemed the vodka – priced under £10 – to be “clean and decently balanced”. Moving up a price bracket, a flight of Premium vodkas was presented to Lindsay’s team. The trio discovered the first Master medallist of the day in the form of “big, powerful” Polar Ice Arctic Extreme, which was praised for its notes of “aniseed” and “pepper”. Five Golds and three Silvers were also awarded in this round.

Moss said: “All of these were technically well made; there were a couple that were quite grainy, but characterful. Reasonable diversity, from super neutral to expressive.”

On to Super Premium and Hopkins and her fellow judges viewed two vodkas as being Master‐worthy: Blu Lie Vodka Italiana and 88 Vodka.

Blu Lie Vodka Italiana was praised for being full of “character, complexity and balance” with its “wheaty nose” and “rounded, velvety texture”. Meanwhile, 88 Vodka was celebrated for “big flavour done well” with big hits of “citrus” on the nose and “sweet pepper finish”. The group also enjoyed five Golds and two Silvers. 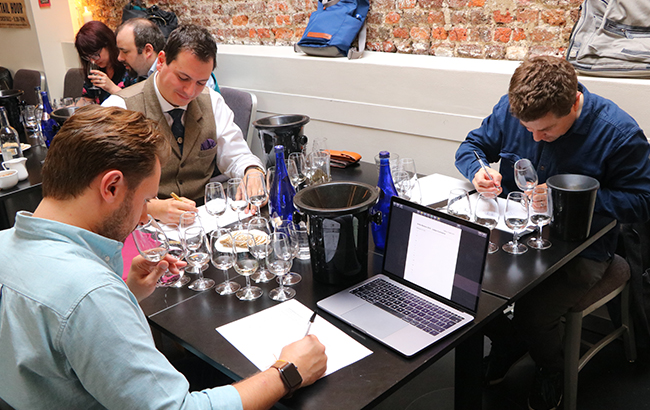 Reflecting on expectations in this medal‐heavy round, Smith said: “I want things that are clean and crisp but have a little flare of uniqueness that makes them stand out.” The Ultra Premium flight was then split between Hopkins’ and Lindsay’s teams, with the latter panel awarding two more Masters. The first went to Tanzanite Vodka, hailed for being “silky, cool and sweet”.

The second Master was given to D1 Potato Vodka, which had “grassy, hay and crisp” notes that led to a “dry finish”. The panels discovered eight expressions worthy of Gold and a further six deserving of Silver.

“Ultra Premium is an opportunity for distillers to showcase the best they can do, and I believe that was reflected in the general quality of this flight,” said Lindsay. For Moss, the increase in quality when compared with the less expensive rounds was evident in Ultra Premium. He added: “A big step up from the premium flight, as you would expect. A couple here had a lot of character.

Moving away from price points, we explored the different styles of vodka on the market. First, a flight of Organic vodkas was handed to my team. We were impressed by Menaud Vodka, which we agreed was Master‐worthy.

Rodriguez’s first reaction to the vodka was “wow”, as he found notes of “chocolate, cocoa nib, vanilla and raisin”. The palate continued with hints of “flambéed banana, mango, chocolate and vanilla”.

Rodriguez said: “I love characterful vodkas. All that flavour has naturally come from the still and that marks a perfectly made vodka. I wish it had more weight on the palate, but vodka needs vodkas that champion character.”

While this particular expression drew high praise from the judges, overall the round – which produced four Golds and two Silvers – still had room for improvement. “This was a bit of a weird flight because it’s called ‘Organic’, but I don’t think that necessarily shows up in the product when it comes to drinking,” noted Rodriguez. “There was a mixed bag of vodkas – but the Master was outstanding.”

Lindsay, Gorn and Moss then got stuck into a flight of Microdistillery vodkas, and awarded a Gold to BrewDog Distilling Company’s Rogue Wave Vodka, with flavours of “cereal, oil and wax” and a “big explosion” on the palate. “Fresh and clean” Purity Vodka 51 also walked away with a Gold, while Silvers were handed to Purity Vodka 17, Purity Vodka 34 and Pur Vodka. 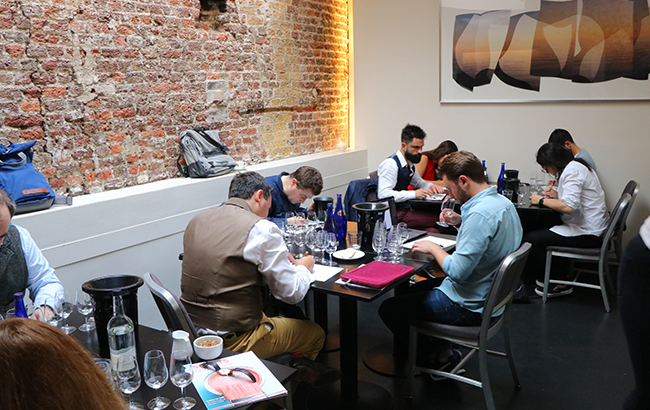 Not long after, another Master joined the growing medal haul in the Smooth round, awarded to Skull X Platinum. Ticking all the smooth boxes, the vodka was said to taste of “creamy vanilla” and have a “really gentle finish”. After awarding four Golds and three Silvers, Hopkins said about the Master medallist: “This was an archetypal smooth vodka – wonderful texture, very clean and fresh with some interesting flavours coming through. A brilliant sipping vodka.”

In the Oak‐Aged category, my panel was blown away by Hannover Vodka Atlantic Crossing 62%. There was only one medal to award – a Master – which the judges said was because of the vodka’s “zingy” aromas of “slight iodine, peat smoke, intense lemon and stone fruits”, which led to a “thick, full” mouthfeel with “beautiful integrated alcohol drying out the palate”.

Asked what made this particular vodka so special, Rodriguez responded: “Complexity. The flavours are in layers, not all mushed together. Citrus pops out, the nose is amazing. It’s perfectly balanced, perfectly made. The smoke aroma adds a layer of comfort.” In the Vodka Base – Grain category, Krupnik Premium Vodka picked up a Gold from my panel for its notes of “lemon and vanilla” and its “clean, decent finish”.

As my group switched to the Vodka Base – Fruit contingent, Chilgrove Vodka picked up a Gold for its “grape and tropical fruit” notes. The following round, Vodka Base – Wheat, we found truly impressive as two Masters were awarded: one to “lovely, dry” Purity Vodka 34 and another to Hannover Vodka Straight, which had notes of “pine and citrus”. Three more vodkas took home Golds.

Commenting on the Master winners, Greifer said: “These definitely delivered on flavour and complexity. Each one was different from the other and I really liked that; I enjoyed them immensely.”

Continuing the Master run was Luksusowa Vodka, which picked up the top award in the Vodka Base – Potato flight for being an “elegantly made, creamy” vodka.

As the competition progressed to judging each vodka by region, Tovaritch! walked away with a Gold in the Russia heat. In the Eastern Europe round, Kavka Vodka took home a Silver.

The Scandinavia flight produced a Master in Koskenkorva Vodka Original. Smith said: “There’s a sweetness and creaminess I would expect from this region. Very clean but there’s character and a gentle hint of black pepper.” Purity picked up a further three Golds in this flight, while a fourth was handed to Gustav Artic Vodka.

Looking to the Rest of the World, Diageo’s Smirnoff No. 21 was considered Gold‐ standard, with notes of “candied lemon”.

Diageo continued its medal haul in the Infused Vodka round, taking a Gold for Smirnoff Zero Sugar Infusions Cucumber and Lime, and a Silver for Smirnoff Zero Sugar Infusions Watermelon and Mint. Weedka and Norwegian Wood also won Golds in this heat, while Debowa Polska Oak Vodka secured a respectable Silver. But Master Gustav Dill Vodka took the top award for its “lovely dill aroma” and “very enjoyable flavour”.

Progressing to Flavoured Vodka, Diageo’s Smirnoff Peppermint Twist scooped a Master for its “amazing mint boom on the nose”. Pamplin said: “I liked the generousness of the mint flavour. From nose to finish it was really consistent and bold. No battle between flavour and spirit.” An impressive six Gold medallists rounded off the flight.

Before allowing our judges to depart, there was the scrupulous task of selecting a Taste Master to be completed. Never before has there been such a fiery, passionate debate about this accolade – which truly speaks volumes about how progressive the vodka category has become. Just missing out – but deemed thoroughly deserving of a ‘highly commended’ recognition in the competition by the judges – was oak‐aged Hannover Vodka Atlantic Crossing 62%.

But it would seem that quality and consistency abound in Hannover Gin Spirit of Niedersachsen‐made products because the Taste Master title was bestowed upon another of the company’s vodkas – Hannover Vodka Straight.

Summing up the competition, Moss said: “We saw a good level of diversity today. There were plenty with just enough expression of the raw material, but there were a tiny number of products that we deemed to not be well made, and they tended to deviate from the category anyway. My expectations of well‐made, either neutral or delicately‐flavoured, well‐distilled spirits was met. The infused vodkas had a higher success rate than I have seen in the past, which is very promising.”

Click through to the following page to see the full set of results from The Vodka Masters 2019.