Yael Vengroff was set to become a dancer, but as soon as she discovered the drinks industry she swapped the barre for bars. Now, the award-winning bartender is dancing to her own tune in LA. 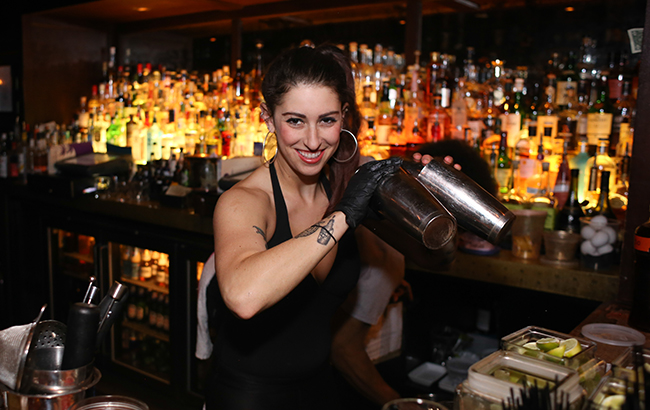 Texas-born Yael Vengroff moved to New York to pursue her passion for dance, but instead found an interest in bartending that would sweep her off her feet. “I was a dancer and I wanted to continue dancing while I studied at school,” says Vengroff. “Dance had been my passion forever, but I fell so hard into this industry that I just completely stopped dancing.”

Vengroff, who is now bars director at The Spare Room in Los Angeles, says she felt herself falling for the industry soon after starting her first job as a cocktail waitress. She then began working her way through the ranks and had the opportunity to learn from industry heavyweights including Death & Co’s Alex Day and Pegu Club’s Audrey Saunders.

Throughout her time in the on-trade, Vengroff has worked in every style of bar there is, from fine dining venues and dive bars, to high volume cocktail joints and bottle-service drinking dens. “I tried everything I wanted to try,” she says.

After learning all she could from each establishment Vengroff moved on, and soon found herself working with Death & Co owner Proprietors LLC. It was during her time with the bar operator and consultancy firm that Vengroff took her talents out of New York.

“I started to get bored and wanted to do something else, and that was when I got the opportunity to open a bar in India,” says Vengroff. “India was… I have a word for it, and that is ‘wonderfuck’. It was wonderful and fucking ridiculous at the same time – it was a challenge.”

In India at the time, Vengroff says there was “zero cocktail culture”, and imbibers had to be prized away from their treasured Johnnie Walker Black Label and ice.

“Seven years ago, India was definitely ready for cocktail culture to arrive, but drinkers were also very attached to what they had been drinking forever,” she recalls. “I don’t know what India is like now as I haven’t been back, but at that time we had to guide drinkers and get them to trust us in order to make them a cocktail.”

After her stint in India, Vengroff travelled back home to Houston, Texas, for a few months to reconnect with family. This was the first time she had been home for an extended period since moving to New York when she was 17. “It was definitely a chance to draw a lot of inspiration from the bars back home in Houston because a lot of them are quite lovely,” she adds.

While still working with Proprietors LLC, Vengroff moved to Los Angeles where she worked with the bar operator before moving to work at LA neighbourhood bar Harvard & Stone. But while working at the LA bar, Vengroff says she always had one eye fixed on The Spare Room.

“I always wanted to work there,” Vengroff explains. “It’s shrouded in sexiness; it’s like there is a sex appeal there that I think is very intriguing and is what I love about this industry. I was also attracted to the playful element of the bar – that room has so many little areas, activations and things that you can do inside the space. You never really know what you’re going to get there because every night is so different.”

The Spare Room opened in Hollywood’s Roosevelt Hotel in 2011. The gaming parlour boasts a chic interior and two vintage bowling lanes, as well as a cocktail menu curated by Vengroff. On the menu, drinkers will find creations such as: the Ibranca Trump, made with banana rum, Branca Menta, coconut milk, macha colada and pandan leaf; and classic twists like the Salt & Vinegar Martini, which combines vodka, dry vermouth, carrot and dill brine, and celery shrub.

However, if India was home to drinkers who were unlikely to change their order, LA is where Vengroff has encountered people eager to avoid drinking altogether.

“Los Angeles is not a drinking city,” she says. “Everybody is in bed early, they don’t stay up late at night and everyone is in the business of working and feeling good – alcohol isn’t really a part of that lifestyle. Sometimes I really miss having people just being in and excited about drinking.”

LA’s health-conscious clientele haven’t hampered Vengroff’s innovative streak. Instead she has learned to adapt her menus to negotiate drinkers’ reservations about certain serves and ingredients. “If I want to innovate or do something different I’m going to have to do something a little bit tricky with the wording on the menu,” she explains.

One such example is the Strolling Magician, which was created when one of The Spare Room’s bartenders began experimenting with an American brandy flavoured with garam masala.

“The garam masala brandy tastes like curry, and one of my bartenders mixed it perfectly with amaretto, paprika syrup, celery bitters and wine to make this incredible cocktail that’s really savoury and so well balanced,” explains Vengroff. “I was sitting there thinking ‘how am I going to write this on the menu in a way that people are going to order this thing?’ So I get a little bit clever with the writing and say almond for the amaretto and curry leaves for the garam masala brandy, so I cheated a little bit.”

While working at The Spare Room, Vengroff has received acclaim from critics and won a number of industry awards, including at New Orleans drinks festival Tales of the Cocktail.

Having been nominated for American Bartender of the Year at the Spirited Awards in 2017 and missing out on the title, Vengroff was again nominated in 2018 and walked away victorious – which she says was a “really, really special moment. It was just such an honour and I was shocked to even be nominated.” But winning was “bittersweet”, she says.

“My best friend John [Lermayer] passed away last year and they had just done a tribute to him, so I was half in tears already. When I went to the stage I could feel him watching me and I don’t really know if I believe in any of that but when I got there I couldn’t really say anything more than, ‘This is for LA, and this is for John’.”

In her role as bars director, Vengroff splits her time between The Spare Room, New York-style Sichuan Chinese restaurant Genghis Cohen in LA, and Seattle rooftop bar Mountaineering Club. Despite admitting struggles adapting to a role in management rather than bartending, Vengroff says working with different flavour profiles, menu briefs and teams are some of the “coolest things that happened as part of the job”.

Having worked her way from cocktail waitress through the ranks of barback, bartender, manager and now director, Vengroff says that it is now that she is at her busiest that she has found balance in her life.

“I prefer having a lot of different stimulations; that is when I can be the most creative,” explains Vengroff. “Now that I’m working on more projects I’ve found a balance and last year I was finally able to start dancing again, so that has been really great.”