For all the political chill in the air, Russian demand for international spirits appears to be undimmed, and Poland is positively thriving. However, pricing remains an issue when it comes to recruiting new consumers. 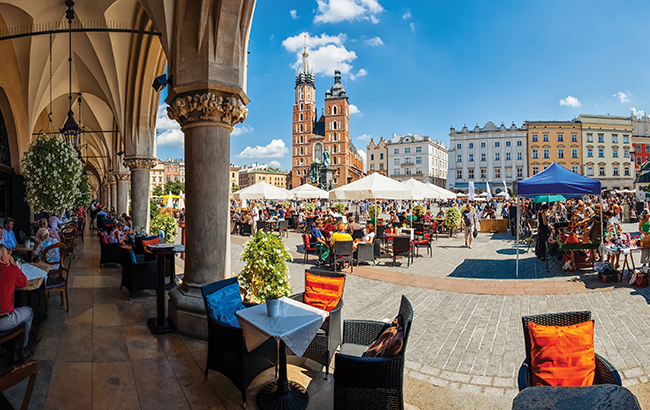 Five years into the new Cold War, precipitated by Russia’s annexation of Crimea in 2014, and there’s little sign of a thaw on the political front. Yet for all the sanctions and threats of boycotts, the market for western spirits in Russia continues to grow. “I wouldn’t say it has yet reached pre-crisis levels, but the dynamics are relatively positive,” says Oksana Pevtsova, Bacardi’s managing director for eastern Europe. “Consumers are slightly more relaxed in the way they spend money, and in the way they’re going out more frequently. And they’re definitely more relaxed when it comes to consuming better products.”

Bacardi’s leading brand in Russia is Martini, whose power was demonstrated a few years ago when the company promoted it as a long drink with tonic to a younger audience. According to Pevtsova, the whole country ran out of tonic water as a result. She claims that Martini enjoys “almost 100% awareness in Russia”, and is the country’s “biggest international spirits brand by far”. It is unclear when Russians could first enjoy Martini in the domestic market, but the big push behind the brand began 10 years ago.

By that point Havana Club was almost middle-­aged in Russia, having been there since the 1960s. Nick Blacknell, the brand’s international marketing director, is wary of making generalisations about this vast, complex country, but he believes the market is becoming less polarised. “Clearly, over the years, there has developed a solid middle-class consumer in Russia who is buying premium and super­-premium products in much the same way as the rest of Europe, and that’s where Havana Club fits in,” he says. “The old cliché was that the average Russian drank vodka and beer, and that only the super­rich drank imported spirits. That’s no longer the pattern, and it’s a resilient market, despite all the economic challenges.”

Imported spirits clearly have a long way to go if Pevtsova is correct that their overall share of total spirits is still only 4% by volume and somewhere around 12% by value. Affordability remains the biggest barrier to recruiting new consumers, especially outside the concentration of wealth in Moscow and St Petersburg. In the 2010 census there were 10 other cities each with a population of more than a million, and of these Pevtsova mentions Novosibirsk, Yekaterinburg, Nizhny Novgorod and Krasnoyarsk as being particularly important.

Helping to make imported brands more accessible is Russian billionaire Sergei Studennikov, whose fast­-expanding Krasnoe & Beloe chain has almost 7,000 stores in the country, putting it on track to become Russia’s third­-biggest retailer by 2021. Two thirds of the shelves are given over to typically 800 lines of alcohol, which include brands such as Jack Daniel’s if the wholesale price is keen enough, according to the Moscow Times last October. The paper quoted Ivan Fedyakov, head of the Infoline research group, as saying: “Alcohol has been the most profitable category for the largest food retailers, but Krasnoe & Beloe is disrupting the market. It’s offering a wider range of beer, wine and spirits at lower prices, and even taking on the grocery chains on their own turf by selling food.”

Supplying this ‘Ryanair of the Russian high street’ may do little for the bottom line, but it does broaden the consumer base. Another way of making your shelf price more accessible is to bottle in Russia. The Beluga Group bottle and distribute William Grant’s Fox & Dogs Scotch blend, and has done the same for Bacardi’s William Lawson blend since 2016. It added William Lawson’s Super Spiced in October 2017, when a Beluga press release explained the benefits of the joint venture: “Bottling in Russia allows Bacardi to ensure agility, stay close to the consumers and promptly address their demands. Local bottling and packaging also ensures the brand’s sustainability, affordability and resistance to currency fluctuations that eventually keeps the pricing stable.” And, lest any politician was reading, the release also mentioned the extra jobs created, and that “federal and regional budgets received more than one billion roubles of taxes and fees”.

Super Spiced – a 35%-­abv spirit drink – is “doing well as a softer-­tasting whisky”, says Pevtsova, who claims some consumers “admit they have to drink whisky for status, even if they don’t like the taste”. She senses there is awareness of the different types of whisky, as does Aaron Martin, general manager for Brown-­Forman Russia, who talks of “an openness towards American whiskey”. He adds: “At one time, the category was mainly limited to Jack Daniel’s. Other American whiskey brands are starting to gain traction, and we welcome this development. They can help accelerate overall category development to all of our benefit.”

With Russia being a dark market, “brands don’t have easy tools, like TV or paid digital advertising, to get their messages out to a wide audience”, Martin says. “We all focus on the areas of the marketing mix that are available to us. In some ways, it makes our decisions easier – fewer choices in allocating budgets. The restrictions may favour established brands. New ones face a slower build because they can’t generate awareness quickly through media, but media has never been the sole path to success.” And, as Blacknell points out: “You are allowed to promote in store and do bar activity, such as cocktails.”

Havana Club does a big summertime push on the frozen Daiquiri in Black Sea resorts such as Sochi. “Rum is an extremely exciting category,” adds Bacardi’s Pevtsova. “It’s still very young, but it’s the fastest recruiter of newcomers to international spirits. You can do anything with rum and it’s going to be tasty.” She believes it symbolises the warmth of the Caribbean to sun­-starved Russians.

The same may be true of the Czech Republic, which, according to analysis by Pernod Ricard, is “now something like number six in the world for super­-premium rum”, says Blacknell. While Pernod focuses on its boutique Pacto Navio brand, the most popular is Božkov – a Czech rum produced by Stock Spirits, which controls 36% of the country’s spirits market. Such dominance explains why it also handles distribution for Diageo and Beam Suntory. “They see Stock as an aircraft carrier for their brands because we’ve got the sales force and the reach into every channel,” says Richard Hayes, the firm’s marketing director.

With brands such as Captain Morgan in the Czech Republic and Jim Beam in Poland, where Stock also handles Beam’s portfolio, Hayes is well placed to comment on the dynamic between local and international spirits in eastern Europe. Starting with the biggest category in the biggest market, he says: “Vodka to the Poles is not a commodity; it’s an expression of national pride. By drinking it in shots and not submerged under Coke or tonic, they’re used to distinguishing between different brands, and if Smirnoff is not doing well in Poland it’s because it’s seen as an ersatz foreign competitor up against strong local vodkas.”

While conceding that vodka is in gentle decline in Poland, Hayes says: “Reports of its death have been grossly exaggerated.” Stock is heavily into flavoured vodka, a category growing by 7% a year, according to Hayes, who believes it is embedded in the culture, using traditional ingredients such as pears or walnuts. He thinks an older generation of Poles would have viewed such drinks as ‘female’, whereas younger Poles are more ‘gender neutral’ when it comes to spirits.

From its research, Stock has discovered that young consumers like drinking together, with the women choosing the drink, which is happily shared by the men of the group. If it’s a bottle of Keglevich strawberry vodka with its ‘soft bouquet, concentrated aroma and low­-alcohol level’, so be it.

Poland has also become a significant whisky market, with the off­-trade on 3.7 million cases (MAT to January 2019), according to Nielsen. This is for all whisk(e)y, led by Ballantine’s with an 18% share, followed by Johnnie Walker and Grant’s on 14%, and Jack Daniel’s and Jim Beam on 9.6%, with Bushmills and Tullamore Dew bringing up the rear. “The majority of consumers are not at a stage where they can differentiate between whiskies from different countries,” says Hayes.

Supplying the big Polish supermarkets can be as tough as in the UK, but he suspects that brand owners who complain of low margins do so because they haven’t managed to tap into the traditional off-­trade. “About 65% of spirits volumes still go through corner shops and independent outlets,” he says.

Neighbour Ukraine has a population of 42 million and a confirmed taste in spirits. Five years ago the market was in freefall, with GDP almost halving from 2013 to 2015, but it is recovering. Pevtsova claims Martini, Bacardi’s biggest brand there, is already enjoying strong double-­digit growth. For Hayes, Ukraine certainly has potential, and he calls it “the next Poland, when things calm down”.