Peripatetic Canadian bartender Megs Miller has found a home in London and in her new job at Fam, a place to show off her hospitality. 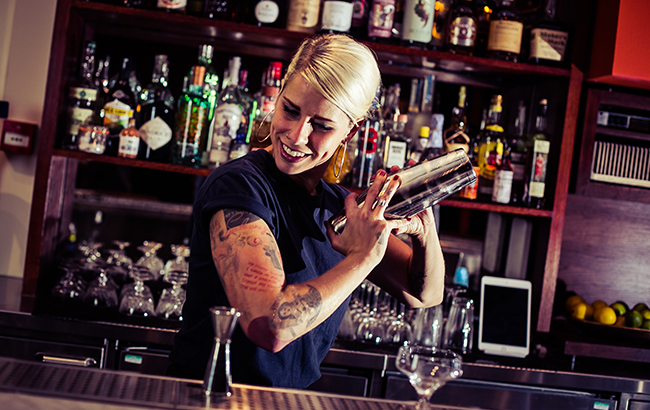 For as long as she has worked in the on-­trade, Canadian bartender Megs Miller says she has been known as “the Tequila girl”. “When I was 16, I visited Mexico for the first time for a family friend’s wedding,” says Miller. “It was just this beautiful, colourful, crazy place and I fell in love with it.”

Miller has had a passion for Mexico, its people and spirits ever since, and says after that first trip she soon began telling her family that she wanted to become a bartender. A few years later, Miller took up her first job behind the stick.

She says: “When I moved to Australia for university I found myself working in a nightclub making these cheesy cocktails, like Cosmos and Long Island Ice Teas. I remember layering them up and thinking I was so cool.”

After completing a degree in interior architecture, Miller began working in a design office on the development of a new Brisbane bar, called Cloudland. It was while splitting her time between days in the office and nights behind the bar that Miller discovered the nine­-to-­five lifestyle wasn’t for her.

“The firm asked me to stay on for another project, but I was like ‘no, I can’t sit at a computer all day’,” Miller explains. “I’d finish work and go to the bar and I’d feel like I had nothing to say to people. I realised that I was a people person and was not quite ready to just be sitting behind a desk.”

After visa complications led to her deportation from Australia, on what she describes as “not a fun day”, Miller went back to Canada for a few months. “I didn’t know what I was going to do,” she says. “Everyone moves to London, so I wanted to do something different. A girl I had worked with had family in Scotland, so we booked oneway tickets to Edinburgh. I had seen some mutual friends talking on Facebook and they were working in Edinburgh and said they might have a job for me.”

The day after landing in the city, Miller found herself in a job interview to join the team at renowned Edinburgh bar Bramble. “That was where I had my big ‘ah ha!’ moment for cocktails,” she says. As well as learning a host of new cocktail­-making skills, it was while working at Bramble that Miller was approached by Bacardi Brown­Forman to work on its Cazadores Tequila brand in the UK. As someone who keeps an agave encyclopaedia for bedtime reading, this was clearly an opportunity she could not afford to miss.

Miller moved to London, where she split her time between bar work and her new role as Cazadores brand ambassador. While looking for a bar team in London to join, Miller came across a new venue set to be opened by famed bartender Dre Masso.

“I remember hearing that Dre Masso was opening a bar in London,” says Miller. “Of course, I was like ‘Dre Masso is opening a bar, I need to get a job there’.” The pair hadn’t met before, so Miller reached out to mutual friends to see if something could be arranged.

“When I met Dre, he showed me the derelict building that was Opium before it opened. I asked if he had any questions for me, and he just said ‘no, I did my research, you’ve got the gig’. So I was the first person they hired at Opium.”

Since then, Miller and her partner, Rhys Wilson, have worked with Masso on numerous projects around the world, including 10 months spent in Indonesia working on Masso’s Potato Head hospitality and lifestyle brand.

After just under a year in Indonesia, Miller’s love of agave spirits enticed her back to London, where she worked as UK brand ambassador for Pernod Ricard-­owned Olmeca Altos Tequila. But after two years, her wanderlust got the better of her and soon Miller, Wilson and their dachshund puppy, Derek, were preparing for another overseas adventure – this time in Colombia.

While living in Colombia, Miller, Masso and Wilson launched creative bar agency Comunidad, which Miller describes as “a little drinks agency doing bits and bobs on any projects that anybody wanted us to do”. So far, its CV includes work on global competitions, including the Chivas Masters and Altos Tequila’s Tahona Society, as well as work with a number of Colombian bars, not-for­-profit organisations and other hospitality venues. So much for a few “bits and bobs”.

At this time Miller also took on a new role with Altos, becoming the ambassador for its Tahona Society competition. “I feel very, very lucky that they gave me that opportunity,” she says. “Altos is a brand that is hugely close to my heart and I love being part of that family more than anything.”

After nine months in Colombia, Miller and Wilson had to move back to London for a short period, which they planned to spend checking in with friends. However, a few days after landing in the country, Eric Yu, who had been Masso’s business partner at Opium, approached them to say he had a space available and asked if they would be interested in taking it on.

“It was a bit of a whirlwind,” says Miller. “I remember calling Zoë [Van Der Grinten, Fam bartender], who had landed back in London around the same time after living in New York, and I asked her if she would do something like this. Then I thought about if I would look back in 50 years and say that I did it, or that I didn’t.”

After agreeing to take on the space, the venue was transformed into Fam, a neighbourhood cocktail bar that Miller, Masso and Wilson opened last November. With an interior design created by Miller, the bar’s ethos is centred on the “community, culture and family” of London.

Since opening, Fam has begun securing its place in the heart of London’s on­-trade family, with Miller and her team of experts focusing on “making sure that everyone who walks through the door feels welcome”.

In an effort to support its community, the bar hosted a fundraiser to mark International Women’s Day (8 March). The Fam Female Fiesta raised money for UK-­based charity Solace Women’s Aid, and saw Miller and the bar’s other female staff take the night off, while its male bartenders worked for the evening – and donated their wages in support of equal pay for women.

“Bruce [Govia, Fam bartender] was the one who came up with the idea,” says Miller. “It’s important that we have women supporting women and men supporting women. The more we speak about these issues, the more forward-­thinking we will become.”

The bar was created to celebrate the “cultural melting pot” that is London, and in doing so it is throwing its weight behind a number of headline issues, but that doesn’t mean Miller has forgotten what lies at the heart of imbibing culture – hospitality.

“Hospitality is just about taking care of each other,” says Miller. “Sometimes we get so busy and forget that a bar should just be somewhere that anyone can come and relax. It’s the same way I feel about Tequila and life in Mexico really; everybody is welcome and everyone should be treated as part of the family.”