From humble beginnings, Douglas Laing & Co has grown to become a Scotch whisky favourite. The Spirits Business speaks to members of the family about Ugandan dictators and how founder Fred was almost swapped at birth for Bruichladdich. 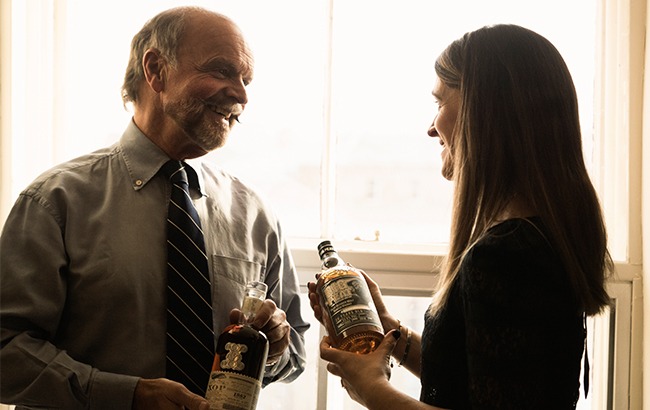 After being demobbed from the RAF, Douglas Laing found himself owning a small brand of blended Scotch in 1948. He had been sold The King of Scots by its American owners, along with a list of customers in South America and the US, and sufficient stocks for about a year, just four or five casks. These were the modest beginnings of Douglas Laing & Co, which joined the ranks of bottlers, blenders and brokers in the Glasgow whisky trade.

The volume of Scotch shipped down the Clyde was vast, but the number of whisky firms shrank as they merged, sold out or closed down. Somehow Douglas Laing & Co survived as an independent family business, and today it appears stronger than ever. It celebrated its 70th birthday last year with operating profits up 40% to £2.4 million (US$3.21m) based on sales of 70,000 cases in 2017.

The first customer that Douglas Laing recruited himself was a German importer in Bremen only a few years “after he’d probably been dropping bombs on his backyard”, says his son, now chairman, Fred Laing (pictured above with his daughter, Cara). Neither his father nor the German could speak the other’s language, but they traded happily for decades using “a kind of commercial Esperanto”, claims Fred, whose father almost swapped him at birth for Bruichladdich distillery in 1950. The most notorious customer was the Ugandan dictator Idi Amin, who suddenly claimed he was the uncrowned king of Scotland. Douglas Laing wrote to him, saying: “Well, in that case you should be drinking ‘King of Scots’,” and earned a 200­case order in return.

Fred joined the firm in 1972 after cutting his teeth at Whyte & Mackay and White Horse Distillers, and before long was busy filling whisky into ceramic miniature golf bags and golf club heads to attract Asian yuppies in duty free. “We started to ship four­- to five­-year­-old blended Scotch in container loads around the Pacific rim,” recalls Fred. “Suddenly we had an amazing business and it helped us win The Queen’s Award for Export in 1990.”

His father died six years earlier, leaving Fred and his brother, Stewart, as joint­-MDs. As the ceramic golf bag market imploded, along with the Asian tiger economies in the mid­-1990s, things looked bleak at the company’s HQ – a four­-storey townhouse in Glasgow’s Kelvinbridge.

According to Fred, the firm suffered a serious existential wobble. In 1999, with no Asian recovery in sight, Douglas Laing & Co reinvented itself as a single cask bottler, using its Old Malt Cask brand to mop up the ageing stocks in its warehouse. A year later the firm began selling in the UK for the first time. Fred remembers it as “a needs-­must situation”, and the UK, with its high tax and supermarket buyers gleefully trashing brands, was hardly a market made in heaven. But single cask whisky is something else, and thanks to established bottlers such as Gordon & MacPhail there was a growing interest among UK whisky drinkers.

Today, its single cask brands such as Provenance and Old Particular sit alongside regional blended malts led by Big Peat from Islay, launched in 2009. The label shows “a big feisty Ileach with a windswept beard and Arran­knit jumper”, says Fred, about the cartoon local fisherman. “He’s just off his boat, about to meet the wife, and he’s had a stiff one to brace himself.” It’s a quirky, award­-winning whisky with a certain cult status, if it’s true that some fans are having Big Peat’s face tattooed on their nether regions. He has been joined by Timorous Beastie from the Highlands, Scallywag from Speyside, The Epicurean from the Lowlands and Rock Oyster from the other whisky islands. Having a complete set of five regional malts is unique, reckons Fred.

In 2013, Cara joined as whisky director with her husband, Chris Leggat, who is now CEO. Both had extensive industry experience with Whyte & Mackay and Suntory. The pair are about to take Douglas Laing & Co to new heights as it crosses the Clyde to a modern, £10.7 million (US$13.8m) headquarters, complete with a specialist bottling line and a spanking new distillery called Clutha, all under one roof. It will be brick-­clad, with big windows to show off the stills producing a whisky that will be “gritty and urban”, says Cara, with relish. Assuming final planning approval is granted, the stills could be fired up in early 2020.

The transition to a third generation, something barely a tenth of family firms achieve, involved Fred and Stewart Laing splitting the business in two in 2012/13, which can’t have been easy. His brother established Hunter Laing, which has already built its classic, pagoda-­roofed Ardnahoe Distillery on Islay. Clutha, Gaelic for ‘the Clyde’, will be different. “The amount we’re investing for the future is so much more than we’ve ever done over these past 70 years. I suppose there’s that confidence we have never really had before,” says Fred, his trademark waxed moustache twitching with pride. Yet his daughter’s ambition appears boundless. “We don’t want to stop at just one distillery,” she says. “We’d love one in every region in due course.”

But Cara is keen to stress her determination to focus on the core business and not get distracted by “the shiny new toy”, as she calls the distillery. The core lies in the brands, especially the regional malts. Big Peat’s volume rose by more than 25% last year. “It’s ironic,” she says, “but the exciting growth element in the business takes it back to its blending roots.” There are also plans to revitalise the somewhat neglected King of Scots blend.

The Laings believe that being a family business helps them recruit fresh talent from an industry that can feel corporate, faceless, and slow to respond. “Those who’ve joined us from the bigger companies refer to the endless layers of sign-off and bureaucracy, whereas we can react really quickly,” Cara says. “Our record on turning around a new product is six weeks.”

As for the family, the fourth generation is waiting in the wings. “The three-­year-­old already has an unnerving interest in whisky,” she says of her daughter. “She could make a great CEO one day. She’s a bossy little madam.”

Click through the following pages to see the timeline of Douglas Laing & Co’s brand history. 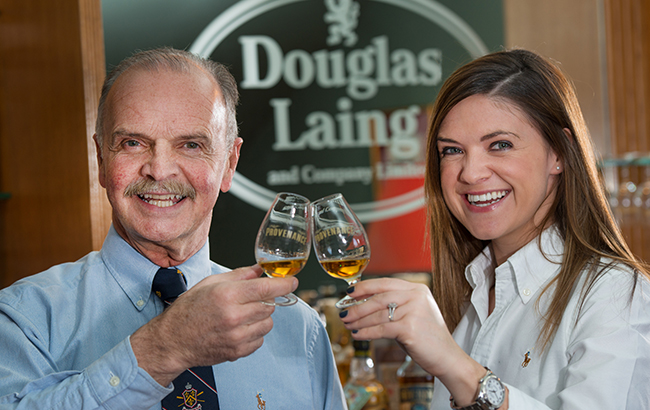 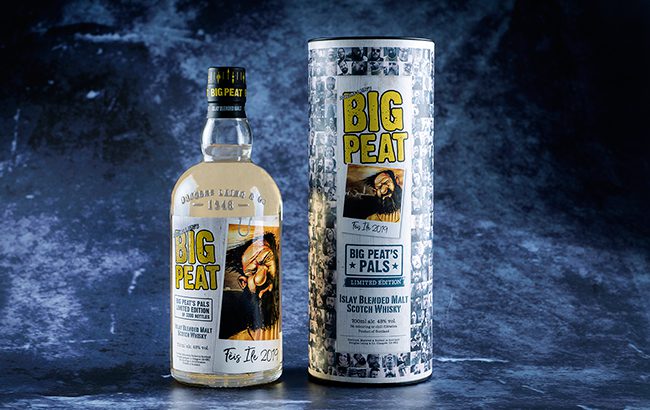 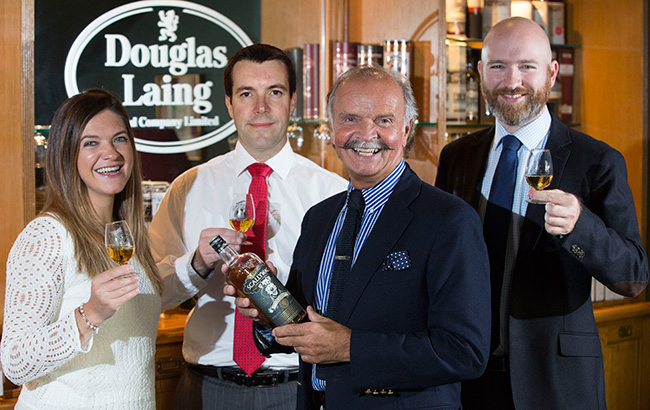