Free from the comparatively straight-laced confines of Diageo, David Gates is relishing his new role as head of BrewDog’s spirits unit. In line with the brewer’s disruptive ethos, he has big plans to shake up the Scotch world. 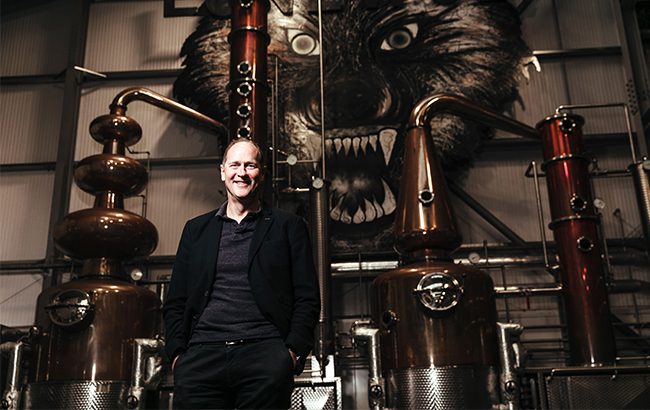 Every so often a game changer enters an industry and alters attitudes and behaviours forever. In the UK beer sector, that disrupter was BrewDog. Following the craft beer boom in the US, the Scottish brewer burst onto the scene in 2007 with a singular vision: to lead a ‘craft beer revolution’ in its home market.

It wasted no time in ruffling feathers. One year after launching, founders James Watt and Martin Dickie caused a media storm with their Tokyo* brew, which, at 12% abv, (increasing to 18% abv in 2009) was described by watchdogs as “utterly irresponsible”. They responded by bottling Nanny State – a 0.5%­ abv “liquid protest”.

The brewer’s history is littered with such acts of defiance, but despite its punk attitude, BrewDog has found a mass following. It was even listed 65th in BrandZ’s countdown of the most valuable brands in the UK in 2018. Alongside Johnnie Walker, it was the only alcoholic drinks brand to make the cut.

In 2015, the provocateur announced its intention to “light a fire under the UK spirits market” by building a distillery inside its brewery in Ellon, Aberdeenshire. “I remember sitting on the other side of the fence at Diageo, hearing that BrewDog was launching a spirits division, and thinking ‘this will be good’,” says David Gates, the newly appointed managing director of BrewDog Distilling. Gates built his career over 27 years at Diageo, with roles including global brand director for Johnnie Walker, global head of premium core spirits, and most recently as managing director of Diageo Futures, where he nurtured start­-up drinks brands and technology providers.

In 2017, BrewDog’s Lone Wolf Distillery launched its inaugural “pure bloodline” spirits range, comprising a vodka, gin and custom-made tonic and soda. The distillery completes every aspect of production in house, without the use of neutral grain spirit – a rare move in white spirits distillation that is enabled by its access to wash from the brewery. The site also features what is apparently the world’s first triple­-bubble still and the tallest rectification column in Europe.

Under Gates, BrewDog’s spirits arm, Lone Wolf, has been renamed BrewDog Distilling – an “umbrella” under which Lone Wolf and other “future” spirit brands will sit. The change will enable the spirits portfolio to capitalise on the “brand equity” of BrewDog, Gates says. “When BrewDog was founded, it had first­-mover advantage in craft beer, which in the UK was a relatively underdeveloped marketplace. The craft spirits market is congested now, and you might argue we are late to the party. From a spirits perspective, to not leverage that brand equity feels like a missed opportunity.”

Gates envisages “real benefits” from a “more synergistic approach” in BrewDog’s beer and spirits units, creating “more consistency in terms of brand architecture and brand aesthetic”. In particular, he is inspired by BrewDog’s “scrappy and combative entrepreneurialism”, which he admits is a very different mindset to what he was accustomed to at Diageo. However, Gates “got massive energy” from his work with start-­ups such as Australian whisky Starward and German vermouth Belsazar as managing director of Diageo Futures, and enjoyed the “lack of bureaucracy” in these disruptive businesses.

He calls his move to BrewDog the “opportunity of a lifetime” that lets him join a team that is “really unafraid of failure, is prepared to break the rules and is just fun” – something he believes there isn’t enough of in the spirits world. “Sometimes the industry can take itself a bit too seriously. It can be a bit austere, and some of the purpose-­driven work can sound like you’re trying to save the world. When BrewDog gets it right, it has a real charisma and a glint in the eye that the spirits industry could really do with.”

But behind this irreverence, Gates is embarking on a mission he says he takes very seriously: “To make Scotland fall back in love with its national spirit.”

He explains: “There’s so much old-­fashioned tradition that’s attached to Scotch whisky – actually bringing some of the BrewDog punk attitude is exactly what’s needed. When you look at Scotch in the 1950s and 1960s, it was actually a really ballsy category, and it had a point of view; it wasn’t all this black tie, status nonsense. We need to get a bit more grit. The BrewDog business is gritty, it’s down to earth, it’s democratic. Scotch at its worst can be pompous, aloof – it can be quite unapproachable and snobby.”

In 2016, BrewDog launched Uncle Duke’s – billed as a “bastard love child” of Scotch and Bourbon. The three­-year­-old single grain, made using third-­party liquid, has been matured in heavily charred American virgin oak casks, mirroring the production of Bourbon. At the time, BrewDog said on its blog: “We were tired with the whisky scene in Scotland and we set out to create our own schizophrenic hybrid.” The group will launch the first whisky distilled by its Ellon team, led by master distiller Steven Kersley, later this year, according to Gates, who keeps specific details under wraps.

BrewDog has been distilling for three years, meaning its whisky is almost old enough to be labelled ‘Scotch’, but Gates says the firm does not feel bound by category laws. “The SWA [Scotch Whisky Association] regulations were well meant, but I don’t think they have helped the industry stay as relevant as it might have done,” he says, adding the rules could “possibly just be ignored. I’d rather ask for forgiveness than permission and do the right thing for the consumer, and be transparent. As long as you’re honest about what you’re doing, who can complain? The regulations are clear, but we are not members of the SWA. We want to make people fall back in love with whisky made in Scotland. This is our main goal and how we get to that quality of liquid… we’ll see.”

Gates’s comments follow a growing number of voices calling for more freedom in Scotch whisky production. Last year it was revealed that Diageo had assembled a secret task force to assess potential changes to the regulations, including the creation of a new sub­-category for lower­-abv blended whiskies and the ability to finish Scotch in Tequila barrels. The SWA called the proposals an “overreach”, but its CEO previously told The Spirits Business that there’s scope for “more flexibility” in how the regulations are “interpreted”.

For some producers, such as Compass Box, a change to the regulations would offer greater transparency in Scotch – something Gates reiterates is of paramount importance to BrewDog Distilling.

“There are so many bullshit brands claiming to be craft that are buying GNS [grain neutral spirit] and adding flavour to it, and ‘doing local provenance’, and that needs to be called out. There are some amazing craft brands that are genuine and authentic and are making it by hand, but there are others that are masquerading as craft, but they are buying grain neutral spirit from a supplier and tweaking it or bottling it – that, I think, is potentially misleading.”

Gates adds that BrewDog Distilling will continue to refrain from using GNS, and would instead “rather increase capacity”, which is possible at Ellon. “I would love for us to have distillation capacity in other countries,” he adds. “The US and Australia would be the most obvious locations to piggyback off our brewing capacity.”

2019 promises to be a big year for BrewDog Distilling, with a new brand of vodka and gin on the way, as well as its first in-­house whisky and a rum that “will be made in a different way to how most rums are made”. Gates adds: “There’s some really interesting things you can do from a liquid perspective. They will be handmade, authentic and real.” All new products will be distilled at the Lone Wolf Distillery, which, in line with Gates’s vision for greater synergy with the beer business, will “probably” be renamed.

BrewDog Distilling will also launch some “collaborative” products, highlighting what Gates claims is an untapped area of innovation. “We are open-­minded. It’s about what we can learn from what everyone else is doing, and there are people doing interesting things in places like Australia and Taiwan. We are learning from them, and also from our own brewery colleagues. BrewDog has a long history of doing collaborative brews, and that opportunity also sits in spirits.”

Other areas of innovation Gates has his eye on are low­-abv spirits and cannabis­-infused beverages. “If companies are not at least keeping a careful eye on the developments in the CBD/cannabis industry they could be considered negligent,” he claims. But for now, whisky will be BrewDog Distilling’s main effort because “this is the biggest category that is ripe for disruption”. And since James Watt and Martin Dickie, who Gates describes as “visionaries”, prefer to work in “dog years”, innovation will be coming thick and fast.

But, ultimately, Gates believes BrewDog Distilling’s main task is to “be remarkable”, which he admits isn’t tantamount to being a crowd pleaser. “What we take from the BrewDog beer business is to have some people love you and talk to that community, but be prepared for lots of people to not like you. That’s fine; I fully expect that to happen. We will be doing some stuff that some people will hate – but as long as some people love it, that’s what’s important.”