Cutting-edge bars are seeking to enhance the customer experience by using futuristic technologies that offer not only a point of difference, but also greater efficiency, understanding and accountability. 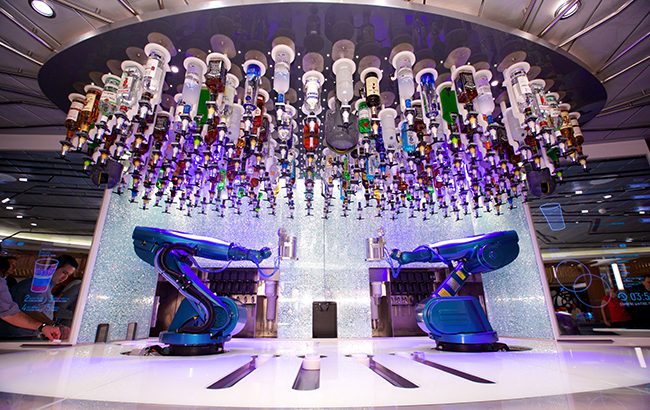 From centrifuges to rotary evaporators, bars are increasingly using technology to create a killer drinks list. But futuristic innovations are now spreading beyond the back bar and are affecting how customers understand, order and pay for their beverages.

Indeed, in a time of augmented reality cocktail menus and drinks sales controlled by near field communication (NFC), the rise of technology in the on-­trade has never been more prevalent.

In October, bartending stars Ryan Chetiyawardana and Robin Honhold announced they were even turning to a technology often associated with cryptocurrency in their pursuit of a more transparent bar industry. The two are hoping to use digital finance technology blockchain as a means of creating more accountable cocktails. Blockchain is a way of storing digital information – much like a digital record book. Chetiyawardana and Honhold will use the technology to record the origin and journey of ingredients and hope it will help them to develop “the world’s most truthful” cocktail.

Other bars are thinking of new ways to use the technology we all carry with us every day. Owned by Australian bar operator The Speakeasy Group, Boilermaker House in Melbourne has launched its latest whisky menu on a mobile app. The app was developed as a means of increasing the information the bar could squeeze into its menu, while making it more reliable and not detracting from guests’ interactions with staff.

“We were struggling to keep our printed menu listings 100%, or even 80%, accurate. Constantly reprinting a 50­-page menu is just not feasible for many reasons,” says Geoff Fewell, head of whisky at the bar. The app allows guests to arrange the menu in whatever way makes sense to them; this could be via region, alphabetically or by price. It also acts as a means of tracking which whiskies imbibers have enjoyed, and users are able to create a wish list for their next visit. “We specifically designed the app to be easy to use for a guest just starting their whisky journey, as well as those well versed in the category,” says Fewell.

At Boilermaker House, guests may use the app to select their dram, but they must order by speaking to a bartender or member of the waiting staff. One company that is investigating ways to remove the human interaction entirely is Makr Shakr. Founded by Italian design and innovation agency Carlo Ratti Associati, Makr Shakr is one of the world’s most successful manufacturers of robot bartenders.

“Makr Shakr started as a fun project for an installation at Google I/O, the annual developer conference at the Moscone Center in San Francisco in 2013,” explains Carlo Ratti, engineer and founding partner and chairman of Carlo Ratti Associati. “After its public debut, Makr Shakr went viral and we started receiving many requests to buy or rent it. It is composed of two German-­made robotic arms mimicking the actions of a bartender.”

To order a drink using the Makr Shakr, imbibers can create their own cocktail or select a classic using an app. After they’ve picked their drink, one of the machine’s robotic arms collects the spirits, juices, syrups and ice required for the cocktail and shakes them together. The mixed cocktail is then passed to the other arm, which pours out the drink and adds a garnish, before serving up the finished product.

The whole process, from ordering to drinking, should require no interaction with another person; no bartender or waiter will be involved. Despite this, Ratti says his creation is not a substitute for human bartenders: “One fear that is emerging is related to the effect robots, including robotic bartending systems, will have on jobs. Makr Shakr does not want to replace the bartender, but rather facilitate new interactions between humans and machines.”

To enhance its cocktail offering, London’s The Lobby Bar at One Aldwych has used its Showtime cocktail menu to slingshot the five-­star hotel into the digital age. The menu features a number of cocktails inspired by shows in London’s West End, and spans sections entitled Comedies, Dramas and Satires, as well as one named Backstage. “The idea of Backstage is that we can show you how the drink comes to life; we show you how it has been made,” says Lobby Bar manager, Pedro Paulo.

The Backstage section is where you will find a cocktail called The Origin, which relies on virtual reality (VR) technology to transport imbibers to its inception. Paulo explains: “With The Origin, we take you on a journey to where the ingredients come from.” On ordering the cocktail – which is made from Dalmore 12 Year Old whisky, cherry liqueur, cherry purée, grapefruit juice, Champagne and chocolate bitters – guests are presented with a VR headset. Once they put it on, imbibers are shown the home of The Dalmore in Scotland, and are led through the production of its whisky. Gradually, they make their way back to London as they begin to see their cocktail being created. On taking the headset off, The Origin appears in front of them.

“I had this idea when I was talking with a friend at a trade show in Berlin,” adds Paulo. After learning about the manufacturing of glassware on a VR journey that took him from sand to drink, Paulo had his eureka moment. “I thought: ‘Wouldn’t it be cool if we could take guests to the origin of a cocktail?’ And now, it’s our best-­selling cocktail and most people don’t know that it comes with the VR until we take the headset to them.”

It isn’t just revolutionary gadgets that are changing the fate of the on-­trade; the rising popularity of platforms like crowdfunding is helping entire businesses to expand dramatically. After a number of start­-up distilleries proved it was a viable option for the drinks world, famed New York bar Death & Co launched its own crowdfunding drive this summer.

“We now have 500 people who are literally invested in our success and are championing our efforts along the way,” says Dave Kaplan, the bar’s co-­founder. Funding in this manner will mean that Death & Co is able to expand in the US and abroad without sacrificing any of its identity. Kaplan adds: “We built Death & Co NYC without any investors – mostly with glue, duct tape and low, low lighting – and we have a small group of three people working in the bar in Denver. We wanted to maintain our independence.”

As new technologies encroach into every corner of the hospitality industry, the bar of the future may look very different from your local watering hole of today. Because of this, Fewell says he isn’t prepared to guess what may come for the industry. He says: “We don’t have a crystal ball, but we do watch Black Mirror, so the future is anyone’s guess.”