While Tequila has taken off, younger sibling mezcal is raring to go. But with its increasing popularity comes pressure on the raw materials that are used to make it, and the need to educate potential consumers about the spirit. 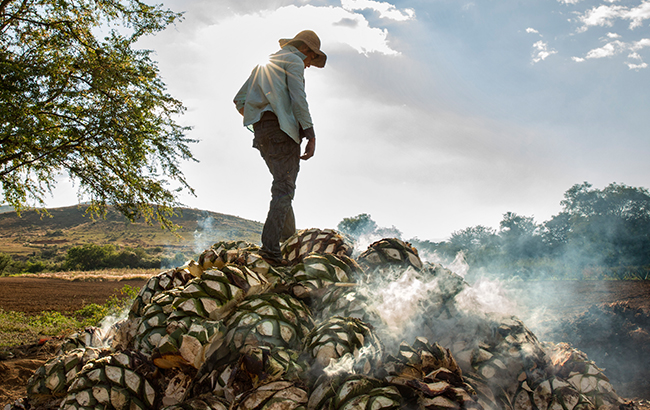 Mezcal: Tequila’s lesser­-known cousin and Oaxaca’s worst-­kept secret. Putting a smoky twist on agave-based spirits, mezcal has been spicing up the spirits sphere in recent years, and though volumes remain small there is an undeniable excitement emerging about the category. The spirit’s craft credentials and complex, unusual flavour profiles perfectly tap into current drinks trends seen in the wider industry – and this hasn’t gone unnoticed by the big players.

Bermuda­-based Bacardi, which also happens to be the world’s largest independent spirits producer, made its foray into the mezcal category by acquiring a minority stake in Ilegal Mezcal in February 2017. French drinks group Pernod Ricard soon followed suit, buying a majority share in Del Maguey Single Village Mezcal in August the same year for an undisclosed sum. And then came George Clooney and Diageo in February 2018 with the first line extension from Casamigos Tequila: Casamigos Mezcal.

When big money enters a relatively small sector, it seems almost inevitable that changes will follow. But Michael Gardner, global business leader for Del Maguey, says that has not been the case since Pernod Ricard’s investment. “The Del Maguey organisation remains intact with all its people globally and in Mexico running the business,” he says. “We’ve enjoyed a symbiotic relationship, and I would say the integration between the two companies is going very well. We benefit from Pernod Ricard’s expertise in distillation and turning to scale, and the route to market is a huge benefit they provide.”

John Rexer, founder and CEO of Ilegal Mezcal, voices a similar experience following Bacardi’s investment in the brand. One of the key benefits of the partnership, he says, is the distribution muscle that comes with a company of Bacardi’s size.

“In the US in particular, distribution is one of the hardest things to achieve,” he laments. “We were trying to get a national distribution network in place and we were very slow to do that; it was very fragmented across the US. Bacardi gave us entry into the largest distribution network in the US, which was fantastic. But we run the brand completely. If we need them as a resource we can pick up the phone, so it’s a really good relationship in that they’re very hands-­off.”

But what is it that makes mezcal so alluring to the global giants? The category, for all its hype and growing popularity, remains a small, developing spirit that equates approximately 2% of Tequila volumes. But that is precisely where its appeal lies.

“One of the most exciting things about the mezcal category is there is still so much to work with and the potential to shape how it is understood,” says a spokesperson for Diageo, which also acquired the Pierde Almas mezcal brand in May this year. “With Pierde Almas, we have acquired a small but prestigious brand with an entrepreneurial and community focus – this was a brand founded with a vision to link it closely to the community where it was made.

“With the Casamigos Mezcal, the brand is stepping into the next Mexican spirits category, the younger cousin that has the capacity to continue to teach the world about local Mexican distilling and tradition.”

Multinationals making a move for mezcal was inexorable given mezcal’s growth figures, says David Shepherd, founder and director of Corte Vetusto mezcal. One of the concerns he sees with this, though, is the additional pressure it puts on already­-struggling agave supplies.

“These big players coming into the category shines an even brighter spotlight on the category and brings consumer awareness, which is great for everyone,” recognises Shepherd. “But there’s no question that the arrival of Diageo, Pernod and Bacardi has put immediate and acute demand on the agave available. If they’re looking to increase production levels quite drastically, I find it hard to understand how artisanal mezcal can be made with that volume. The onus is on them to decide how they want to play and whether they want to respect local tradition or whether their intentions are solely financial.”

In recent years, Tequila has been blighted by agave shortages and price hikes, an issue that its producers are still combatting – and mezcal has not been immune to the adverse effects brought on by a lack of supplies. Though mezcal benefits from its ability to be made from numerous types of agave, compared with just blue weber agave for Tequila, it is still facing price inflation as farmers struggle to keep up with demand – made harder by the plant’s lengthy growth period of at least seven years.

“The agreement we have with our producer is that we absorb the prices of the agave,” explains Shepherd. “Our intention is to make sure the Mescalero is shielded. So we’ll absorb those prices this year, but we’ll eventually need to talk to them about it. For us, quality is important, and we don’t want to give any reason for anyone to cut corners.”

But Shepherd has also noticed the community banding together to try to rectify the situation. “It is really encouraging to see how many agave are being planted and cultivated, and also brands being dedicated to creating and planting wild agave varietals back into the mountains,” he says. “That’s exciting, and there are brands leading on that, and others will surely follow.”

As it stands, the US is mezcal’s largest market. Total volumes of mezcal and Tequila jumped by 8.5% from 2016 to 2017, reaching 17.32 million nine-­litre cases (according to Euromonitor International), the latest in a five-­year stretch of solid single-­digit percentage increases for the category. Tequila’s buoyancy has undoubtedly aided mezcal’s journey onto consumers’ radars. But, says Spiros Malandrakis, industry manager of alcoholic drinks at Euromonitor: “Tequila is hugely premiumised, hugely important in cocktail culture, you’ve got George Clooney helping to boost the category, but Tequila is still geographically quite limited. Mezcal tends to account for single­-digit percentages in terms of volumes, even in core markets, compared with Tequila. So it’s really niche and tiny.”

TAKING OVER THE WORLD

However, there is optimism to be found: “Even if we keep these points in mind, mezcal actually captivates all characteristics that early adopters recognise: artisanal production, authenticity narrative, exotic niche offerings,” says Malandrakis. “And so as another agave-based spirit it is piggybacking off the success of Tequila, which is slowly taking over the world, even though it’s not quite there yet.”

But here comes the conundrum: how do you increase production exponentially without losing the core artisanal values and micro-­narrative that sparked mezcal’s popularity in the first place?

“It’s a double­-edged sword,” says Ilegal Mezcal’s Rexer. “The last thing I want to do is take something I fell in love with, something made by families, on farms, something that is hand­crafted from start to finish, and watch it be destroyed by becoming industrial.” However, the risk of not upscaling to a level that makes mezcal financially sustainable is that brands could be pushed out of the industry, and the wider category could be contained in its US and Mexican markets.

“If mezcal does not reach certain volumes, it does not become economically viable for the big distributors, whether they’re in the UK or the US,” he adds. “Then it becomes a very small, non­-profit­-making boutique industry where the category could very quickly die as an export product. If it doesn’t reach a certain critical mass, it falls apart and becomes a rich man’s hobby.”

But though expansion looks complicated, it is not an impossible challenge. Growth must be slow and carefully planned while retaining hand­crafted production processes to ensure mezcal does not become a victim of its own success: more small fermentation vats, more in-­ground ovens, more small-batch stills. As Rexer puts it, it’s about “replicating and expanding in a way that maintains integrity”.

Like the spirit categories that have come before, education will be a crucial element in mezcal’s promising future – and there is work to be done here. Consumer festivals such as London Mezcal Week and Tequila & Mezcal Fest are providing immersive and interactive opportunities for imbibers to learn more about the category. But confusion remains about Tequila and mezcal’s key differences, something producers are eager to explain. “London Mezcal Week is a great celebration of all things related to mezcal, anything from tastings, to film screenings, to art exhibitions and all things related to Mexico,” enthuses Jesse Estes, brand ambassador for Ocho Tequila and agave spirits expert. “There’s growing education in the UK around mezcal. The majority of consumers probably still don’t fully understand the differences between Tequila and mezcal. With that said, I think that’s changing quickly. People’s interest in what they’re drinking and what they’re consuming in general is growing.”

Tina Ingwersen­-Matthiesen, member of the Borco board and part of the Borco owner family, which produces Mezcal Marca Negra and Mezcal Meteoro, agrees that further education is needed. “Mezcal is one of the fastest­-growing spirits categories; we see great potential for raising awareness for this exceptional spirit and make it indispensible,” she says.

“The fact that the category is constantly growing highlights that its rich Mexican heritage captivates people all around the world. Nevertheless, education about the category has to be driven further so that not only experts and connoisseurs are able to access it and understand its characteristics.”

Conversations about mezcal’s future continue to circle back to one word: opportunity. And that potential is scattered around the globe. Outside of the US, metropolitan cities in Europe, notably London, Berlin and Paris, are hotly tipped as being key markets for mezcal, given their strong cocktail culture, and the spirit is trickling as far afield as Asia, where aspirational drinkers and trend­setting millennials are constantly seeking the next new discovery.

International success is a long­term project, but one that holds innumerable rewards if mezcal producers can pull it off.