European bars to visit in 2019

With top bars across the continent, European venues need to shine to stand out. Luckily, there is no shortage of exciting establishments.

Europe’s bars have had a stellar year, with venues throughout the continent dominating cocktail culture and collecting an impressive haul of trophies at some of the world’s biggest cocktail contests.

While London remains a key player in driving innovation, bars and bartenders across the UK, The Netherlands, Spain, Poland and the rest of Europe have been catching the eye of the world’s discerning drinkers.

This year saw sustainability and waste reduction in the on-­trade dominate the headlines, a trend spearheaded by UK-­based Ryan Chetiyawardana and his White Lyan, Cub and Super Lyan venues. One of last year’s bars to watch, Matt Whiley’s Scout, proved so popular with its sustainability focus that it recently moved to a larger venue in London’s Hackney – after fewer than 18 months at its former site.

A number of exciting new bars opened their doors in Europe in 2018. Cocktail Bar Max & Dom in Warsaw joined Europe’s mixers and shakers with one of the world’s largest spirits collections, while 9 Below in Dublin has garnered rave reviews since opening in the basement of the historical Stephen’s Green Hibernian Club.

Meanwhile, bars such as Panda & Sons in Edinburgh and Dr Stravinsky in Barcelona have risen through the ranks to earn their spot on the world’s best bars lists.

This year also saw the buzz around Joe Schofield reach fever pitch. The UK­-born star bartender left his role as head bartender at Singapore’s Tippling Club after earning the accolade of Best International Bartender at the Tales of the Cocktail’s Spirited Awards. Schofield later announced plans to open a venue in Manchester with his brother – however, details of the new site are being kept under wraps.

Other changes that are set to shake up Europe’s cocktail scene over the next 12 months include the American Bar at The Savoy’s new head bartender, Maxim Schulte, and Chetiyawardana’s plans to close his award-­winning Dandelyan and replace it with “something brighter, shinier and more fitting”.

Click through the following pages to discover Europe’s top bars to watch in 2019.

Not to be missed: Flying Dutchmen Cocktails – Amsterdam, The Netherlands 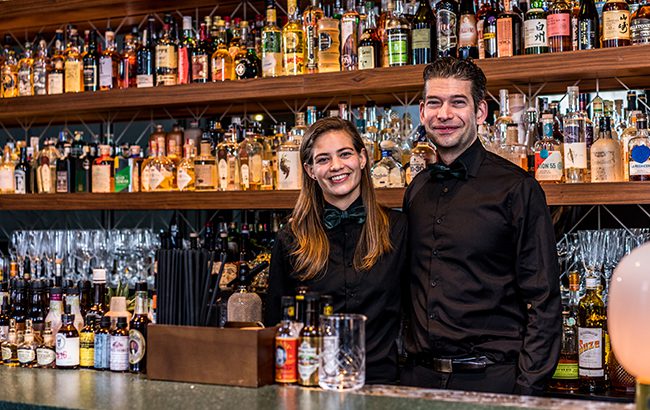 “The bar is focused on classic cocktails; we focus on knowing the techniques before making Instagrammable cocktails with things like dry ice,” says Tess Posthumus, bartender and owner of Flying Dutchmen Cocktails.

Posthumus and fellow bartender Timo Janse opened Flying Dutchmen Cocktails with the aim of educating bartenders, hospitality experts and consumers in Holland about classic drinks. “A lot of bars in Amsterdam focus on creating their own recipes, but if they say something is a twist on a Negroni some people in The Netherlands won’t know what a Negroni is,” says Posthumus.

This approach hasn’t stifled the team’s creative spirit, however – their exploration of the evolution of classic drinks such as the Corpse Reviver, Sazerac and Martinez has seen the bar gain a reputation for offering some of the best cocktails in the Dutch capital. Posthumus says: “At Flying Dutchmen we try and stand out with our service and by offering good proper drinks.”

Flying Dutchmen Cocktails has been named our overall Europe Bar to Watch in 2018. 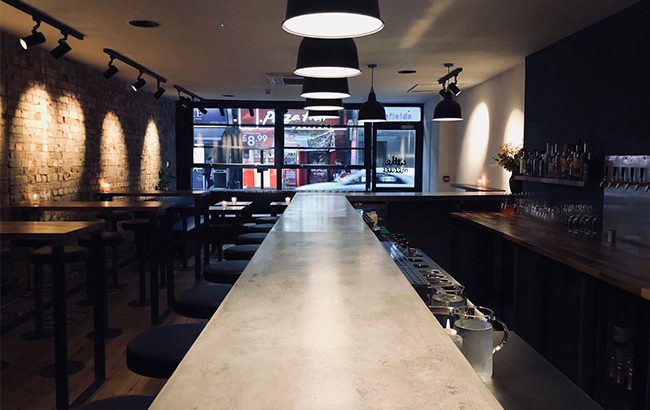 The space is influenced by the understated minimalism synonymous with Three Sheets and Peg + Patriot, while drinks use modern kitchen techniques behind the scenes to ensure “service is super simple and drinks get to people as fast as possible,” Sherwood adds. 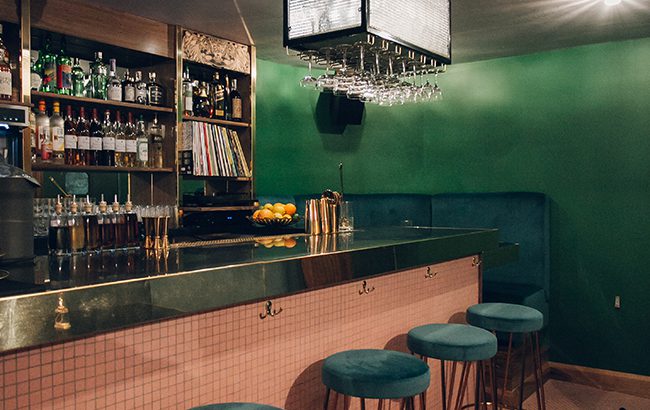 While Sheffield may not be the first place that comes to mind when you think of world­-class cocktails, this “Wes Anderson train carriage in an old bog”, is a stand­out in the north of England’s cocktail scene.

Public, the fourth venue from hospitality experts James O’Hara and James Hill, has transformed a 19th­-century public toilet into an intimate drinking den. “It feels we’ve been building up to something like Public for nearly a decade,” says O’Hara. “The discovery of the site was the initial inspiration and from then it was all about setting out to make the perfect small cocktail bar.” 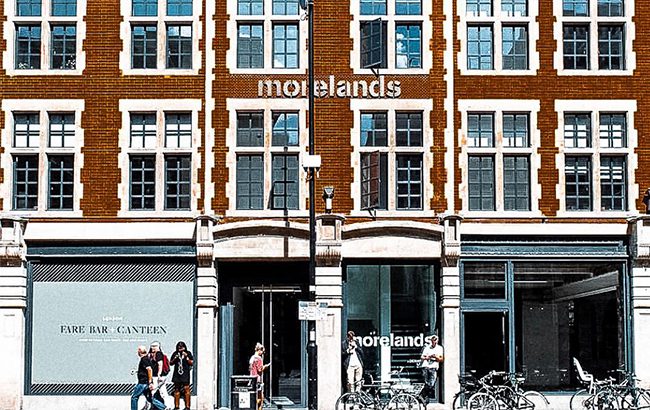 Dzelzainis, who was nominated for the Best International Bartender award at this year’s Spirited Awards, has created kegged cocktails to be served in the bar’s canteen, such as the Nitro Vodka Espresso – a mix of vodka and coffee that pours like Guinness.

Downstairs in the ‘intimate’ bar, which serves its own bespoke tonic water, guests can enjoy cocktails and a 250­strong wine list. 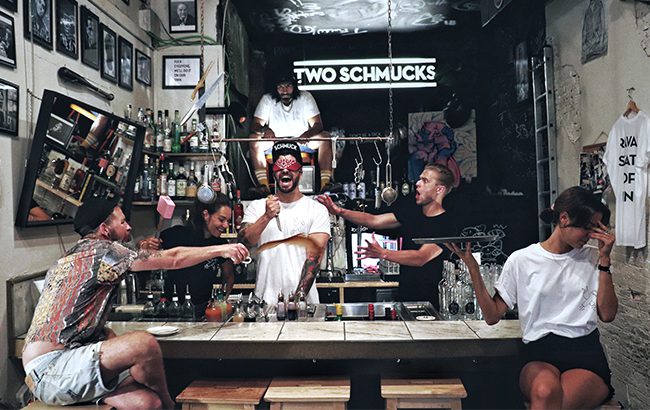 This “five­-star dive bar” created by Bacardi Legacy finalist Moe Aljaff and AJ White opened its doors at the end of 2016.

In the six months that followed, the two bartenders had “no money, no rest, no sleep and no staff”, as they reinvested everything into their new venue.

The bar, which Aljaff says “had to be 100% us, in order to not lose motivation during tough times”, strives to offer great products and service in an easy­-going atmosphere.

Aljaff also has plans to transform part of the space into a platform “for young, eager and passionate people in our industry to come and learn”. 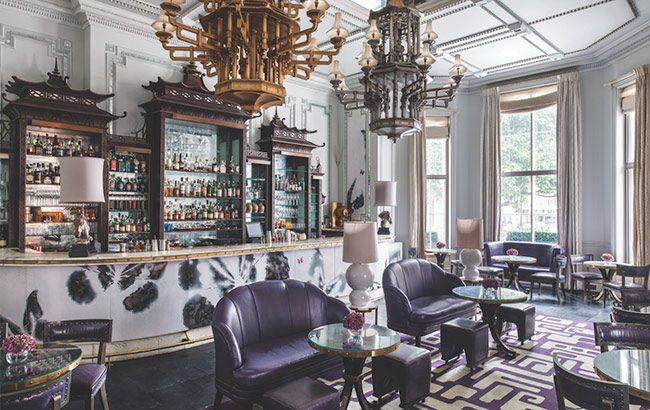 Following an identity crisis for famed London bar Artesian at The Langham Hotel, Anna Sebastian, formerly of The Beaufort Bar at The Savoy, London, and Remy Savage, of Paris’s Little Red Door, have stepped in to transform its fortunes.

The pair have launched two innovative menus since joining, and aim to create a space where everyone leaves happier than when they arrived.