Salvatore Calabrese on his journey from apprentice to maestro

One of the world’s greatest bartenders has a new position in London. SB meets Salvatore Calabrese and hears stories about the stars who have flocked to drink his influential creations. 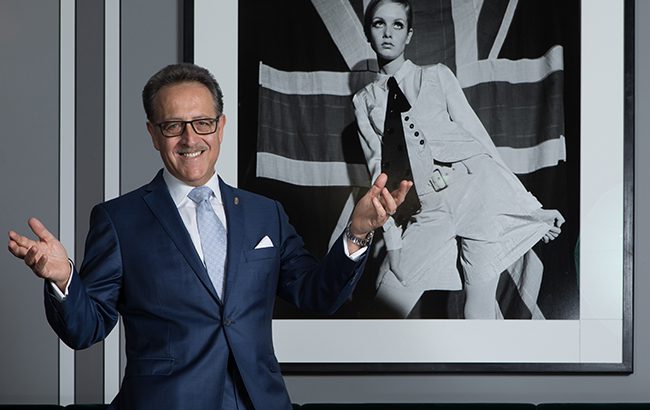 In the summer of 1966, an 11­-year-­old Salvatore Calabrese started working behind the bar at the Reginna Palace Hotel in Maiori, on Italy’s Amalfi Coast. In the 52 years since then, he has gone on to create modern classic cocktails, catered for royalty and served up the world’s oldest cocktail. All things he says he never dreamed of when he first started mixing drinks.

It was while working at the Reginna hotel that Calabrese met the man who would become his first mentor, Signor Raffaello, head bartender at the four­star hotel. “He was the kind of person who could charm the socks off of anybody,” says Calabrese. “He taught me that it is important to read a person’s mood and how to make my first drinks.”

The first cocktail Calabrese learned to mix was an Americano. He remembers: “After making my first Americano I thought I could make a Negroni as well. I saw that Signor Raffaello was chatting with somebody, and this gentleman came up to the bar and he asked me for a Negroni.” Having seen his mentor create the classic Italian cocktail many times before, an ambitious young Calabrese set to the same task. “Signor Raffaello saw what I was doing, and he came over to the bar and he took the drink,” he recalls. “We went round the back and he tasted it. The next thing I knew, he just slapped me right round my ear! It was a gentle slap as if to say ‘don’t do what you are not old enough to do’.” The 63­-year­-old says that to this day he still ducks his head whenever he makes a Negroni.

By the time he was 21, Calabrese had become the youngest maître d’ on the Amalfi Coast, and set his sights on London. In the ’80s, Calabrese and his wife travelled to the British capital, and it was here that his lasting impact on the bartending scene would begin. Calabrese was drawn to a position at London hotel bar Dukes where, after his rival for the position suffered an unfortunate flambé incident, he became bar manager. “The bartender they initially hired decided he wanted to make a hot drink for a customer and he flambéed the bar and the customer, so his career went up in smoke,” he quips.

While working at Dukes, Calabrese developed two innovations that would give him global recognition. The inspiration for the first, according to Calabrese, can be traced back to a simple desire to boost his salary, which at the time was based on a percentage of the bar’s weekly takings.

Realising he would always be limited by quantity in the small hotel bar, Calabrese began investigating ways he could improve quality and increase value. His answer was to start selling vintage spirits, a move he believes has entered the canon of “liquid history”. To do this, he would track down old and rare bottles of spirits that were produced in the same year as some of history’s most significant milestones, such as the signing of the Declaration of Independence and the French Revolution.

Calabrese soon earned himself a reputation as “the crazy guy that made ‘liquid history’,” he says.

The second innovation Calabrese developed at Dukes was the Direct Martini. The method uses ice-­cold spirits, a frozen glass and a dash of vermouth, making it very dry and very cold. Calabrese says he came up with the technique to please American journalist Stanton Delaplane, who immortalised the method in an article in the San Francisco Chronicle. “My Martini even had the seal of approval from the Queen,” says Calabrese. “Lord Westbury and Princess Margaret used to come to my bar for the Martini and one day he said to me ‘Salvatore, I’m throwing a little party to celebrate a birthday of a friend, it’s a small party and she loves a Martini. I know you make the best so will you come?’ And I, of course, said I would.”

This “small party”, it turned out, was for none other than Queen Elizabeth II. Upon learning this, Calabrese’s manager insisted he had lessons in how to address the royal family and, on the day of the party, he was told that under no circumstances was he to kiss the Queen.

While there are few famous faces that could top the royal family for star quality, the Italian bartender has served a host of other big names over the years. Rolling Stones singer Mick Jagger, Taxi Driver star Robert De Niro and James Bond himself, Sean Connery, have all visited Calabrese’s venues. However, one night, Calabrese’s reputation as an “artist of hospitality” gave him an experience he says he will never forget.

“I had Stevie Wonder come to my bar,” says Calabrese. “I used to have a piano in the bar and he used to rock his head and listen to the music. I went over and asked if he would like to play. He turned around and said that he would love to. Then he played in my bar for over half an hour. Imagine how magical that was for everyone, listening to Stevie Wonder playing live.”

When he isn’t rubbing shoulders with the world’s biggest stars, Calabrese can now be found serving as drinks maestro at the Donovan Bar at Brown’s Hotel in London. Following a residency at the London hotel bar in December, Calabrese has now joined the venue indefinitely. The Mayfair hotspot has undergone an extensive refurbishment, which has seen the bar itself moved and extended to frame an original 19th century stained glass window of St George.

The drinks offering has also been transformed – Calabrese’s menu is inspired by 1960s photographer Sir Terence Donovan, a close friend of the Forte family, who own the prestigious Brown’s Hotel.

The list of 16 cocktails is divided into four sections: “bright and refreshing” High Exposure; “dark and mellow” Low Exposure; “strong and bold” High Contrast; and “soft and delicate” Low Contrast. “I wanted to make sure we didn’t lose the identity of the bar,” says Calabrese. “Because, like Dukes and everything that I have done before, the Donovan Bar was a true inspiration for me, and we had to ensure it included elements of Sir Terence Donovan.”

As we discuss drinks on the menu at the Donovan Bar, it’s clear that after so long in the industry Calabrese is still wildly passionate about his craft. “I’ve given the industry the idea that this is not just a job, it’s a career and it’s an art form,” he says. “We say that we are artists at work, and I think that some bartenders really are artists.”