The blended malt whisky from William Grant & Sons made waves when it launched in 2005. Now it has become a stalwart of the cocktail scene. 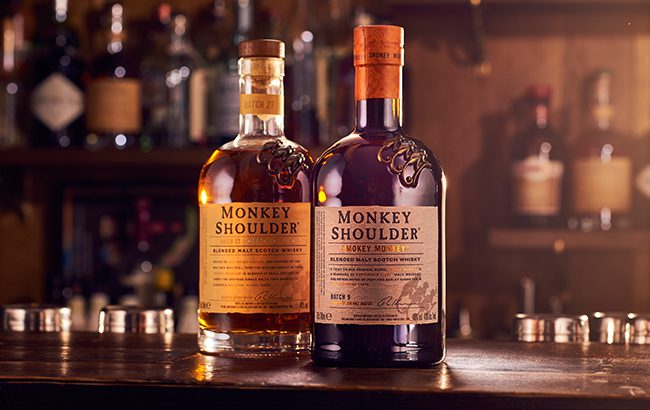 Once upon a time, all of Scotland’s malt whisky distilleries malted their own barley. The wet grain from the steep would be spread over a stone floor for a week to begin germination, and it had to be turned regularly to prevent the little rootlets from matting together. Malt men would march up and down flipping the grain over their shoulders with malt shovels, known as shiels. Some developed repetitive strain injury causing one arm to hang low like a monkey’s.

In 2005, long after anyone had wielded a shiel in earnest, Monkey Shoulder was released as a hip new brand of Scotch from the house of William Grant & Sons. Its guiding light was “about being the new face of Scotch whisky for a new generation of whisky drinkers”, says the firm’s head of whisk(e)y, Jonny Cornthwaite, who insists it wasn’t about plugging a gap in William Grant’s portfolio. “The gap was really about people who drink whisky or, perhaps more to the point, who don’t drink whisky,” he says. “Scotch in 2005 was a relatively stuffy category.”

Monkey Shoulder is a blended malt from three Speyside distilleries, which explains the three monkeys on the bottle’s shoulder. Ask whether it contains other malts, such as Ailsa Bay from the firm’s giant whisky distillery at Girvan, and you may be asking the wrong question. “Monkey Shoulder is about an attitude and approach to what Scotch whisky is, what it can be and how it’s used,” says Cornthwaite.

In 2016, Monkey Shoulder’s former brand ambassador, Dean Callan, said: “Being fun is difficult in Scotch whisky because the category is so established as being serious. That’s the whole reason Monkey Shoulder exists. It was created not to have the stigma of a single malt or the familiarity of a blend.” Nor was it really aimed at that most targeted group in the history of spirits – the millennial.

Cornthwaite says: “I’m 37, married with a kid about to go to high school, so I’m a millennial. It would be ludicrous to compare me with a 23­-year­-old bartender who is just out of uni and having a great time in Manchester, but we might share the same attitude to drinking whisky.”

In other words, this is not really a brand about demographics or categories.

Monkey Shoulder has somehow managed to escape being pigeonholed, leaving it free to compete equally with high-­end Bourbons, Japanese whiskies and, more recently, a tsunami of craft gins in the on-­trade. It grew steadily after its launch in the UK and France, eventually reaching the US in 2012, and passing the 200,000­-case barrier two years later. In 2017, volumes hit 311,000 cases, helped by a strong presence in travel retail.

The competition has finally woken up: 2016 saw the release of Copper Dog, followed by Whyte & Mackay’s Shackleton blended malt a year later. Yet Monkey Shoulder’s success was no overnight sensation, and it is debatable whether anyone enslaved to the City and its short­-term culture of quarterly results could have pulled it off. That’s what Cornthwaite believes, and he claims that at independent William Grant & Sons “the family runs a 50­-year forecast”.

The brand’s natural habitat is the cocktail bar, and master blender Brian Kinsman created the recipe with that in mind. “It’s got a strong vanilla, orange and cinnamon flavour, and has a sweeter profile but with depth and complexity,” says Cornthwaite. “Because it’s made for mixing, every day Monkey Shoulder can be something else.”

To hammer this message home, the firm is running its global #makeitmonkey campaign, complete with an interactive ‘dinky disco’ and films to promote various signature serves. Meanwhile, trundling around Britain’s foodie festivals this summer is the Monkey Mixer – a pimped-­up, bright orange cement mixer with 11,000 litres of Monkey Shoulder cocktail in its belly.

Last summer the mother brand was joined by Smokey Monkey, which includes some peated Highland malt alongside its sweet Speyside whiskies. It was initially rolled out to 70 bars in London and Paris, and Cornthwaite calls it “a great indication of how the cocktail world has evolved. In the past peated flavours would have been a bit too challenging, but today they’re seen as brilliant to use in cocktails.”

If Scotch is now viewed as a more mixable spirit than it once was, Monkey Shoulder deserves to take some of the credit. The brand runs an annual Camp Monkey for the on-­trade, and sponsors the Ultimate Bartender Championship. “Creating strong advocacy from the bartending community is the way for us to build our brands,” says Cornthwaite. “We’re a limited resource in terms of how many people work for the company, so it’s incredibly important for us to have advocacy for our brands.”

In the UK, Monkey Shoulder has gone mainstream, with listings in all the major supermarkets, which may have lost it some street cred among cutting-­edge bars, though Cornthwaite is confident of keeping the on-trade on board through continual investment. As for recruiting new drinkers, trialling the product is crucial, whether in bars, duty­-free stores or even from a cement mixer.

“From consumer research,” says Cornthwaite, “we’ve found that people who are aware of Monkey Shoulder but haven’t tried it see it as an exciting brand, but believe its product quality will be below its rivals’.” In other words, there is something about being really edgy that suggests you may be covering up for some shortfall. The solution is simply to pour people a glass. “Once they try it,” he says, “they realise it’s not only cool, it’s also exceptionally high quality.”

Click through the following pages to see the timeline of Monkey Shoulder’s brand history. 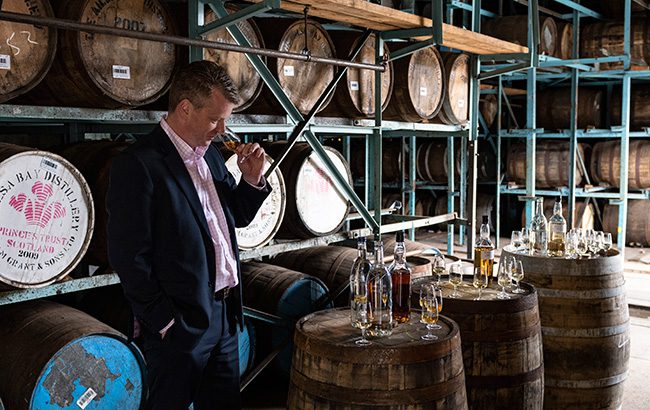 2005 – Monkey Shoulder is released in the UK and France 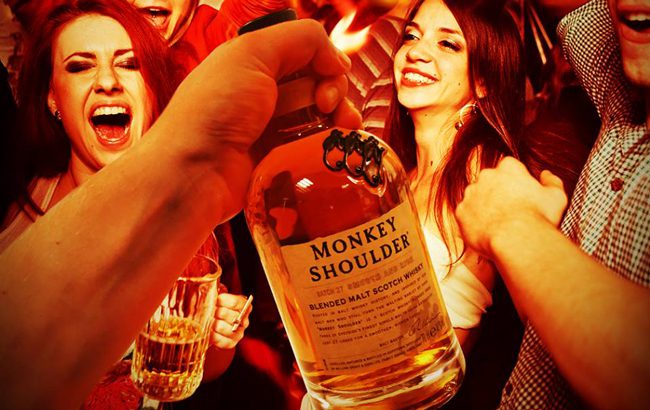 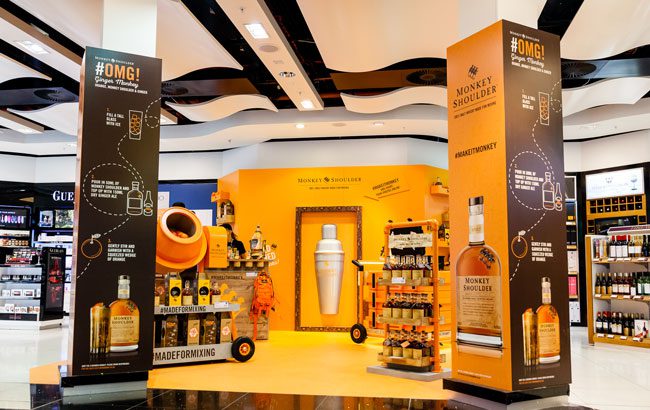