Campaign to transform ‘relationship between brands and bars’

A campaign encouraging people in the drinks industry to come up with better ways of working is gaining traction.

Innovation is the pulse of our industry. It’s what keeps the spirits world ticking over, generating new trends, pushing the boundaries of creativity and raising standards on a global scale. But “the relationship between brands and bars is broken”, Michael Vachon told me last year. The head of brand development at Maverick Drinks has long been an advocate of improving how the two work together – and he has been extremely vocal about his disdain for “retros” and “kickbacks”; in other words, paying to have your product listed on a back bar or cocktail menu. Over the years, Vachon and his ‘mavericks’ have been eager to create a movement that “encourages progress”. And so, at London Cocktail Week 2017, the #ForwardDrinking revolution began.

Vachon’s motives for the campaign have been clear from the start. This is not a campaign by Maverick Drinks for Maverick Drinks. It’s an initiative he hopes will be adopted by his peers in the industry, and one that will bring together brilliant minds to create new, improved ways of working. “We cannot do this alone,” Vachon stresses. “We’re not trying to effect immediate changes. We’re just saying, let’s open up this dialogue and have a conversation because surely there are better ways to build brands and build partnerships. Let’s take a more holistic view of your business and say ‘I’m going to work with brands I can create value with’.”

Since launching the #ForwardDrinking campaign, Vachon and his team have hit the road with a series of talks in bars across the UK, including Edinburgh, Manchester, Leeds, Cardiff and Bristol. Each location drew crowds of between 40­-60 guests, from bar backs, bartenders and bar owners, to brands and distributors, all eager to be part of the inaugural series centred on the topic: ‘The relationship between brands and bars is broken’.

“It started by us approaching a few cities, Edinburgh, Manchester, then other cities came to us and said: ‘We are crying out for this kind of talk, please can you come and do it here?’ That was great to see,” recalls Vachon. “The talks are a two-­way street. We’re here to stir up debate and contribute, but also to learn and provide that feed back to the industry.”

A bar that aligns closely with Vachon’s views on retros is Manchester’s Peggy’s Bar. It was the first stop on the #ForwardDrinking tour after the campaign’s inaugural talk at London Cocktail Week with Nightjar. Peggy’s prides itself in opting out of listing fees or pouring deals – and has done since it launched last year. “When we opened, we felt we’d be giving away some of our creativity if we had brands we had to stock,” says co-owner Shane Kilgraff. “We wanted to stock products we were really excited about.”

Kilgraff holds what he admits is a “pretty extreme” notion about how to counter the problems he sees with retros – one being the lack of transparency from both the bar and the brand. “I would be interested to see how these deals would be made if it was stated on the menu that these brands had paid to be there, and not that the company thinks it’s the best gin or Tequila for the drinks. That’s right at the farthest reach, I know, but I think transparency is key. It’s quite shady really but it’s been engrained in the culture of menus for so long now.”

But not every venue has delivered such a steadfast opinion on the matter. When the talk took place at Panda & Sons in Edinburgh, the overall vibe was not wholly against retros, but also not entirely in favour of them in their current guise. Iain McPherson, Panda & Sons owner, was both for and against the concept. “All bars and brands work differently,” McPherson explains. “We realised from the talk that it’s about balance, building long-term relationships with brands rather than taking as much money as we can in one contract. The talk really made me think about how we work with brands and how we as a bar can be better. Whether it’s a big or small brand we should treat them with respect, and nurture those relationships rather than just take an unlimited pay cheque.”

Unwavering in his policy to not accept retro-style deals, Peggy’s Kilgraff and fellow co-founder Adam Day were forced to be more creative with how they make savings and generate profits. As a result, Peggy’s – which changes its menu on a weekly basis – is passionately focused on sustainability to reduce its overheads, and throws away only one bag of rubbish per week.

“We don’t waste anything,” insists Kilgraff. “Sometimes we’ll open a bottle of white wine to sell one glass, but then nobody orders another for a week and it’s no good to sell. So rather than binning it, we use it as a base for liqueurs or a vermouth. The idea is that in using ingredients more than once you halve the cost of that ingredient. A lot of people think sustainability is a trend but, really, it’s about best practice.”

This all ties neatly into Vachon’s #ForwardDrinking vision. Though the initial series of talks has focused largely on retros, Vachon is also encouraging on-­ and off­-trade professionals to call out industry progress using the #ForwardDrinking hashtag. “The concept is how do we make this industry a better place to be a part of? We really want to emphasise that this is not a Maverick Drinks thing – this should be a concept that everyone can be part of to make this corner of the world a little bit nicer. We are in the best industry in the world; let’s make it as great as it can be,” he enthuses. 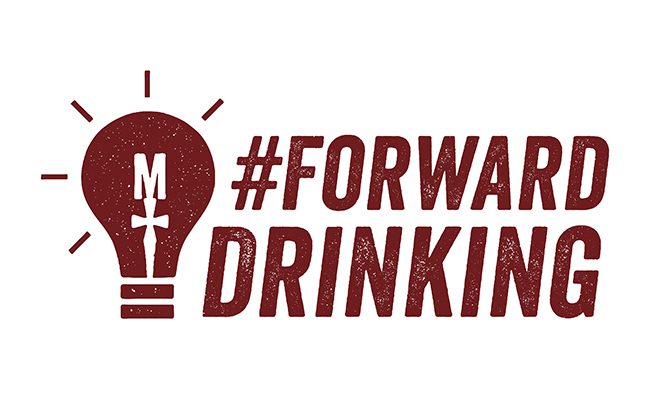 Vachon is already busy curating the second series of talks, the idea for which stemmed from debates and feedback that came about from the initial series. ‘What is your next step?’ will aim to create better awareness of career opportunities and advancement in the drinks industry. The talks will cover a broad range of topics, from CV guidance, to advice on how to bag the dream job.

“Doing CV workshops, general career guidance, career advice for the industry could be extremely helpful,” says Vachon. “There’s not a whole lot of information out there, but there are so many routes of progression to pursue. There is definitely something in helping bar backs, bartenders, even bar owners figure out their next step. If your ultimate goal is to own a brand, great, what does that path look like? If it’s to own a bar, what does that look like? Hopefully we can map out steps that will be helpful to fulfilling their ambitions as nothing like this exists.”

For Vachon, the #ForwardDrinking movement is only getting started – but the buzz surrounding the campaign is already becoming louder. A dedicated website for the initiative is in the pipeline, and there are plans to take the series of talks overseas. Future topics will be dependent on demand from the industry.

“What comes next will be the result of what people tell us during our next series of talks,” says Vachon. “We’ve got a lot of work to do. The real change happens with movement. Our goal is to drive the craft spirits movement forward, get people to drink better and get bars to care more about what they use, ethically and sustainably – it’s all part of the #ForwardDrinking plan.”