As managing director of Diageo Reserve, the company’s portfolio of top-end labels, Cristina Diezhandino is in charge of delivering luxury. Here, she outlines her vision for the future. 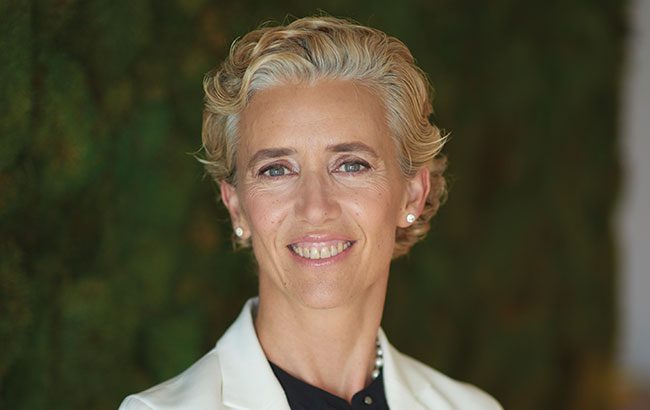 Survey the brightly lit shelves of almost any popular cocktail bar and the familiar labels of Don Julio, Tanqueray Ten, Cîroc and Johnnie Walker Blue Label will most likely gleam back at you. On the surface, these brands have little in common, but they are united under one title: Diageo Reserve.

Diageo’s luxury drinks division is a unique proposition in the industry – it groups together high­-end, high­-potential lines and manages them much like a traditional brand company, with its own dedicated team and global growth strategy, which is activated locally. Diageo Reserve is best known for its affiliation with World Class, the king of cocktail competitions, which has pioneered a now ubiquitous method of enhancing brand education, loyalty and advocacy among influential bartenders.

According to Cristina Diezhandino, Diageo’s category director for Scotch and managing director of Reserve, the business is home to brands dripping with “heritage and legacy”, all of them featuring a premium­-plus price tag. “No matter what category you look at, the high­end of the respective segments is where we see the fastest growth,” she observes. “So inevitably this brings an energy and a dynamism to Reserve that is very exciting.”

Diezhandino entered the drinks world through Allied Domecq in her native Spain, joining Diageo after the company’s sale. She led the Johnnie Walker brand team in Amsterdam, and later became brand director for Diageo’s full portfolio of whiskies and gins. Following key regional roles, Diezhandino brought together her extensive commercial and marketing experience when she became managing director of Reserve in 2015.

“There is a speciality in Reserve that I thought would suit me,” she reflects. “I thought I could take the portfolio from the great place that I found it in to an even better place, and I had a great time – I still do.”

In the six months to 31 December 2017, Reserve, which represents 18% of Diageo’s spirits sales, grew by 11%. The positive performance was driven by Chinese white spirits – predominantly Shui Jing Fang baijiu – and Don Julio Tequila. Vodka brands Ketel One and Cîroc experienced significant declines because of challenges in North America.

Clearly, Reserve covers a lot of luxury bases, but with one notable absence: Cognac. Could the business benefit from an additional category play? “We are constantly looking to see whether there’s more that can be done, and there will be various initiatives in the future,” says Diezhandino, without directly addressing Cognac. She says that Reserve has been given access to new categories through Distill Ventures – Diageo’s investment and acceleration programme for start­up brands.

This year, the group acquired Belsazar vermouth after the German brand ‘graduated’ from Distill Ventures. Belsazar now sits in the Reserve portfolio, and is working to expand its footprint in Europe, where the lower­-abv drinking trend is taking hold. Diezhandino says that through Distill Ventures, Reserve “will be constantly screening the world to see if there are any conversations we should be having, or any new learning and business opportunities. Even though our portfolio is very rich, the view I have is that the doors aren’t closed”.

The red carpet was rolled out for Casamigos, the ultra-­premium Tequila founded by A-­list actor George Clooney and entrepreneurs Rande Gerber and Mike Meldman. Diageo purchased the brand last summer and mouths dropped at the price of the deal: a US$700m initial payment will be followed by a further US$300m so long as the brand performs according to expectations over the next 10 years. Diageo’s hopes must certainly be high for a product that sells fewer than 200,000 cases annually.

“This [deal] really responds to Tequila in the US, which is growing significantly at more than 7%. This in itself explains why this is such a great acquisition for us,” says Diezhandino. The Reserve team will be “working hand in hand with the entrepreneurs” behind Casamigos to expand its international reach, particularly throughout Europe.

Diageo has a keenly defined focus on high-value brands, but are such strategies restricted to the developed markets? In a rare move away from ‘premiumisation’ speak, in 2016 the group announced that it would be renewing its push behind “mainstream” brands in volatile emerging markets. The move has proved fruitful for brands such as blended Scotch Black & White but Diezhandino reaffirms that the Reserve portfolio is “critical” to Diageo’s strategies for all markets. “Ultimately, the most premium segments in every category are growing the fastest in every part of the world – there is no exception,” she asserts. “Reserve is a critical component, and it will feature in strategies for every one of our markets. The excitement is there and we have set up the business teams in such a way that the learning for Reserve is present throughout the world.”

Last July, Diezhandino took on the additional title of category director for Scotch, and has attempted to bring the division closer to Reserve. “More and more I am trying to think about the businesses in a holistic way, asking how we can make the divisions stronger by playing them together, while being careful to nurture the specificities that are pertinent to one part of the portfolio or the other.”

This synergistic approach is indicative of Diageo’s desire to boost the premium image of its blended Scotch brands.

Diezhandino offers Johnnie Walker Black Label as an example: while only the higher-end Johnnie Walker expressions sit in the Reserve portfolio, Black Label benefited from masterclasses hosted by master blender Jim Beveridge at the latest World Class event. “This gave the audience the chance to recognise amazing liquids such as this, which I feel, because they are so present and we see them regularly, we forget about how special they are. This shouldn’t be allowed to happen.”

Diageo is also hoping to imprint the image of Johnnie Walker in the minds of consumers with what has been touted as the ‘biggest single investment’ in Scotch whisky tourism.

In April, the group announced it would spend US$150m on building a new Johnnie Walker experience in Edinburgh, as well as an extensive upgrade to its network of existing visitor centres in Scotland.

Diezhandino confirms that a location has not yet been agreed for the Edinburgh site, which is set to open by 2020 – the year of Johnnie Walker’s 200th anniversary. However, she is confident that it will provide an “incredible experience – immersive, interactive and really state­-of­-the-­art”. The centre will be “linked” to four other distilleries in Scotland – Glenkinchie, Cardhu, Caol Ila, and Clynelish – which represent different regional flavours of Scotch whisky, and also the various characteristics that contribute to the Johnnie Walker blend.

This investment is in addition to the US$1bn that Diageo pledged to grow its Scotch business in 2012. Following the downturn of the market, implementation of the funds was rephased, but eventually included major work, such as expanding production at the Teaninich and Clynelish distilleries, and refurbishing Diageo’s Leven bottling hall. “All of these programmes are really delivering on the investment,” says Diezhandino.

One of the first distilleries to benefit from the investment was Glen Ord, which doubled production to meet demand from a number of blended Scotch whiskies, as well as The Singleton of Glen Ord. In 2015, Diageo announced its ambition to make The Singleton the world’s best-­selling single malt after its three variants – Glen Ord, Dufftown and Glendullan – went global.

Described as a ‘recruitment malt’, Diageo believes The Singleton has the best potential to become its first high­-volume single malt whisky. But with Glenfiddich and The Glenlivet steaming ahead, followed closely by The Macallan, does The Singleton have what it takes? Diezhandino believes so. “It has performed very well, and its growth rate has been phenomenal,” she says. “It’s more attainable than other single malts and allows you to graduate through the category. The Singleton has all the elements to deliver on our ambition.”

Another investment that was made in addition to Diageo’s £1bn pledge was the revival of cult distilleries Port Ellen and Brora – news of which sent excitement through the industry towards the end of last year. “The intention is to reopen the sites in a way that preserves the brands and brings them into the future in a balanced way,” explains Diezhandino. Once liquid is released from the newly awakened distilleries, it will sit in the ‘Prestige’ VIP area of Diageo Reserve: “They are real jewels and will be sitting at the very high end of our portfolio.”

Another move that grabbed headlines this year was the controversial launch of Jane Walker. The female­-inspired iteration of the iconic striding man was launched as a “symbol of the brand’s commitment to progress”, coinciding with Women’s History Month and International Women’s Day celebrations. Diageo donated US$1 from every bottle of limited edition Jane Walker to organisations that champion women’s causes, aiming to raise US$250,000 in total.

However, the product created a storm on social media, with some users criticising what they saw as an attempt to appeal to female drinkers.

“For me, this was an initiative that really intended to celebrate gender equality and women’s achievements,” says Diezhandino. “I suppose when subjects are topical you are always exposed to people thinking differently, and we have to accept that.” Diezhandino does not regret the launch and “wouldn’t hold back from doing something that’s inherently right to avoid anyone thinking differently. It was a lovely, well-intentioned celebration of women’s achievements and I’m really proud of that.”

Diageo has never been reluctant to take risks when it comes to Scotch whisky. In January The Wall Street Journal broke the news that the group had assembled a “secret task force” to assess potential changes to the laws that govern the category. Within the alleged proposals was the creation of a new category of blended whisky to cover flavoured or lower-­abv line extensions. Diezhandino says that while “valuing the past is very important” in Scotch whisky, producers must “constantly think about the trends that will take place and what people will want in the future”.

She adds: “If you get stuck in the past, you might not progress. So there must be a balance – we must anticipate changes in the world but in a way that is caring and respectful towards the valuable assets we have. These principles are applicable to any category, not just Scotch whisky.”

With growing discussion over the regulations of everything from Cognac and gin to rum and Japanese whisky, this ethos is more pertinent than ever to the industry.