With so much useable produce from bars ending up in the rubbish bin, two trailblazing bartenders have declared war on waste. 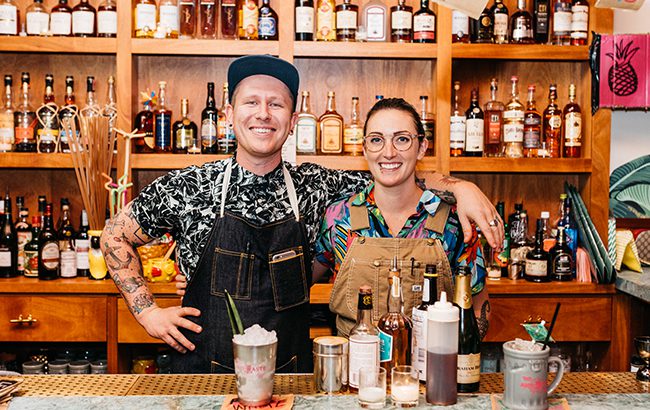 “When we started this, everyone told us it was going to be boring,” says Iain Griffiths, one half of Trash Tiki – a bartending duo that has travelled the world teaching others to make drinks like they give a damn. Somehow, “boring” doesn’t seem like the appropriate description.

Trash Tiki is made up of Griffiths, of Dandelyan fame, and Kelsey Ramage, a Canada-­born bartender who also worked at the award-winning London bar. The two have spent the past 18 months hosting pop­-ups to educate bartenders on different ways of using what we see as trash – including fruit skins, nut shells and avocado pits – in their drinks.

“We started in 2016, when I was working at Dandelyan full time and Iain had, and still has, a role in the Lyan group [headed by Ryan Chetiyawardana],” explains Ramage. “Dandelyan is just such a behemoth and it was going through so much stuff during service on Fridays or Saturday nights. We looked at all of this and thought that we could do more with it.”

Griffiths adds: “Working at Dandelyan gave us a kick in the arse to go out and do it.” The pair hosted their first UK pop-­up in December that year. At each Trash Tiki event, Griffiths and Ramage take classic tiki cocktails back to their simplest form. From there, they find different ways to use each of the cocktail’s core ingredients. Following a successful debut, more dates sprang up in Europe, Asia and the US, setting the Trash Tiki world tour in motion. “We realised that we had to take this whole thing on the road so that people had something tangible that they could taste and try,” says Ramage. “It’s one thing to read a recipe in a book but it’s quite another to hear people talk about it and see what they’re doing, and what their creative interpretation of the drink is.”

In the hope of making the pop-­ups as fun and engaging as possible for the attending bartenders, bar managers and floor staff, Griffiths and Ramage would pump out the best pop-­punk tunes while mixing up a number of classic tiki serves, each with their own trash twist.

They use offcuts of ingredients and items that would traditionally go to waste to create interesting variations of the Mai Tai, Chief Lapu Lapu and Scorpion. Over the course of the tour, Ramage and Griffiths created an orgeat syrup out of avocado pits, a cordial made from watermelon rind and a tepache made with waste pineapple. “We try to use anything we can get our hands on really,” says Ramage. “We use citrus husks to make a stock, the same way you would make a stock out of bones, and then we blend that into our recipes. We also use leftover almond croissants and soak them in sugar water overnight to make a sort of nutty and buttery syrup.”

Griffiths adds: “It’s not dumpster diving, but we are trying to interrupt food waste and prevent it from going to landfill.”

The pop­-ups were initially focused on people working in the hospitality industry as the pair wanted to meet bar owners and managers interested in taking the ideas of Trash Tiki into their own venues.

“This meant that when they came to the pop­-up, we didn’t have to sit there and explain every single ingredient to them,” says Griffiths. “We could just slam the drink down, give them a high five and get on with it.” Consumer interest followed soon after.

Some of the cities that have experienced Trash Tiki’s waste­-reducing recipes first hand include Edinburgh, Paris, Hong Kong, Seoul, Los Angeles, New Orleans, Buenos Aires, Sydney and Melbourne. “For each of our pop-­ups we were usually landing with about 24­-36 hours to get the bar open,” Ramage recalls. “We would send supplies ahead and ask the bars what kind of waste stuff they had themselves. We would also see if we needed to pick anything up from other bars or from the market.”

After 12 hours of prepping ingredients, finalising drinks recipes and making signs out of waste cardboard, the pair would be ready for one whirlwind service. Once they had finished, it would be time to pack up and move on to the next venue, then do it all over again. Since embarking on the tour, the pair has visited more than 30 bars on four continents, encountering other bartenders and bar teams, many with their own initiatives to reduce waste.

“We did our pop-­up in Seattle at a bar called Navy Strength, and they were doing a lot of different stuff,” says Griffiths. “It was all simple things like instead of buying drinks napkins, they were just taking all the waste cardboard that their spirits got delivered in, cutting it into squares, stamping it and creating Navy Strength coasters.”

“There’s also Native in Singapore,” Ramage adds. “They get the bar back to go up the street once a week to pick lotus leaves from the side of the road to cut into coasters. They also have a compost system in the bar where they use an enzyme to keep it composting at a faster rate. Then, as awful as it sounds, it produces this juice that has a lovely smell and is anti­-microbial, so they use it in their hand soap and to clean the bar top.”

The tour finished in Australia in March and Griffiths and Ramage are now preparing another onslaught against unnecessary waste. They hope that this year they will be able to take on more than just cocktails.

“Basically, this year we’re going to get out from behind the cocktail bar and working our way into as many different areas of food and drink as possible,” enthuses Griffiths. “We want to get into the kitchen to look at food waste and the nightclub to find a fun way to make a sustainable rave. Also, we want to see if there’s a way we can drive this message into the wine world; simple things like: does wine have to come in a bottle?”

With 18 months’ worth of pop­ups under their belts, and a vast array of new, innovative ways to use waste products, could Trash Tiki one day open its own waste-conscious venue?

While the duo might look into it, Griffiths adds: “If we never actually open up our own bar but spend enough time in everybody else’s bar that they all start doing this too, that’s still a pretty great result. If we never open a bar because every single other bar in the world started doing what we are doing, I think we would take that as a win, for sure.”