A panel of esteemed speakers went head-to-head to debate the benefits of family ownership in the spirits industry versus publicly-listed companies. Nicola Carruthers reflects on the key arguments raised. 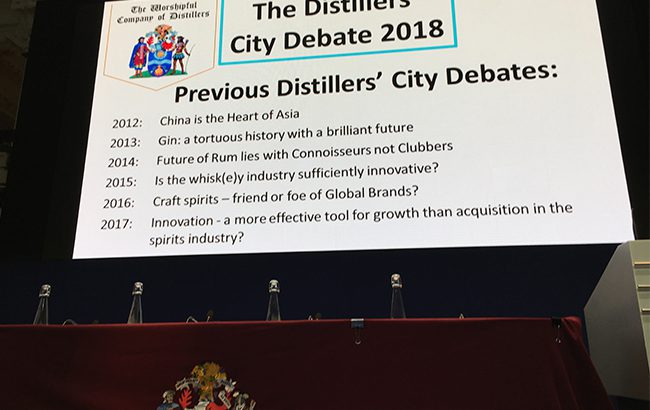 At the annual Distillers’ City Debate, held yesterday evening (3 May) in London, the motion of the debate, organised by The Worshipful Company of Distillers, was: “This house believes that family companies think about the long-term, publicly-listed companies focus on the now.” It was a strong statement to put forward and one that raised multiple thought-provoking arguments from both sides.

Arguing in favour of the motion was Rudd and Jerez, while Gordon and van Strein put forward their cases against it.

He concluded: “Culture is the most important feature to defining a business’s attitude to long-term investment, those with a market-led, innovation-based culture take the long-term view, irrespective of ownership. Ownership is not a factor that discriminates between long- and short-term thinking.”

Family-owned companies “consistently frame day-to-day decisions and look at the consequences they will have on the next generation”, he said.

He also added that the family-owned firms benefit from the “perseverance stemming from the personal success of the founder or from the next generation’s appreciation of the founder’s legacy and success coupled with the expectation of leaving one’s own mark on the legacy.”

Arguing against the motion, van Strein said that the survival rate of family-owned companies is low, and that those who do survive have “one common factor” – access to public markets.

“The public capital markets allowed these companies to stop thinking about survival,” he said. “To think about the long-term, companies need to have the financial freedom and capacity to suffer.

“They need to have the ability to withstand the inevitable headwinds. The public markets have allowed the alcohol markets to do this very well, whether in beer, Cognac or Scotch. Not surprisingly, 85% of the Cognac sold today is by public companies such as LVMH.”

Nevertheless, the consensus across the audience and panellists concluded that a number of factors including innovation, strategy and company values can lead to long-term growth for both publicly-owned and family-owned companies – it doesn’t have to be a case of ‘either…or’.