Billy Walker on his plans for GlenAllachie

Having sold BenRiach in 2016, Billy Walker has not been taking it easy. The master blender has revived the GlenAllachie Distillery, and has big plans. 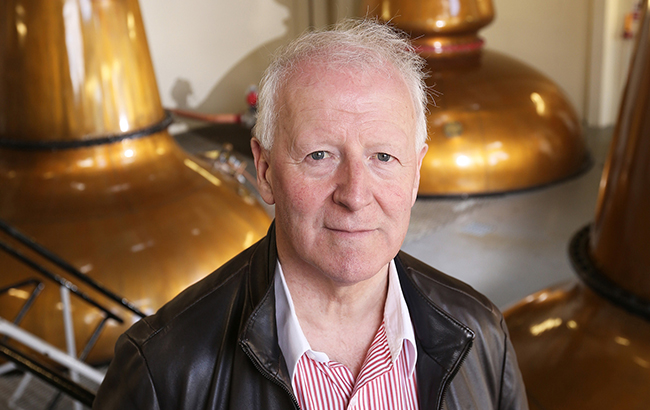 “We’ve bought a train ticket, but is it the express train or the scenic train? That has to be determined yet,” quips Billy Walker as we discuss his latest Scotch whisky venture. Last July, the former managing director of the BenRiach Distillery Company and a consortium of investors entered into an agreement to acquire the GlenAllachie Distillery – along with Scotch brands White Heather and MacNair’s – from Pernod Ricard’s Scotch whisky arm, Chivas Brothers. Walker’s swift return to the Scotch whisky world was somewhat of a surprise, having only relinquished ownership of the BenRiach Distillery Company a year earlier. “We had offers throughout the years constantly,” he recalls, before Jack Daniel’s owner BrownForman made one that was too good to refuse in 2016. The US group assumed ownership of the BenRiach, GlenDronach and Glenglassaugh distilleries, as well as their trademarks, single malt brands, a bottling plant and BenRiach’s headquarters in Edinburgh – all for a cool £281 million (US$405m).

“I know it’s not all about the money, and for me it’s definitely not all about the money, but, generally, for the team and other shareholders it was a staggeringly good offer,” says Walker. Though he adds: “I don’t think we ever decided that there was going to be a time to sell. It was never written in a future plan, but it was maybe growing a little too big for our size of company, and maybe we were seeing that it was being constrained a little bit by not being able to work within the confines of a big organisation.”

BenRiach has come a long way from its founding in 1898. A victim of the Pattison crash of 1899, when the Scotch whisky market collapsed, the distillery was mothballed after just two years of operation. For 65 years, it was dormant, save for its floor maltings, which were used by neighbouring distillery Longmorn. The US-­fuelled whisky boom of 1965 saw distilleries brought back to life across the country, including BenRiach. Though in 1998 BenRiach’s floor maltings were also closed, and the distillery fell silent at the turn of the Millennium.

Then in 2004, Walker and two South African investors, Geoff Bell and Wayne Kieswetter, acquired BenRiach Distillery and the stills were switched on once more. “It was an interesting period when a number of distilleries had been mothballed, and in many ways single malt was only beginning to become quite a vibrant sector,” Walker remembers. “The location was excellent, the size was right and it was just appealing. It was a bit of a diamond.”

In 2008, the BenRiach Distillery Company added the GlenDronach Distillery to its whisky stable, and expanded further in 2013 with the acquisition of Glenglassaugh. GlenDronach remains a firm favourite with blenders, but is yet to captivate the consumer market in the same way as BenRiach. Nonetheless, Walker remains hugely enthusiastic about the distillery’s future. “I knew there was significant potential in GlenDronach,” he says. “It had a particular style that attracted me to it and also the history of being matured in Sherry casks, so I knew there was a really interesting opportunity there. So we took the plunge and bought it.”

Now under new management, Walker’s faith in GlenDronach is resolute. “I’m pretty confident that under the direction of the new owners, GlenDronach will become one of the top five single malts in the world,” he enthuses. “GlenDronach Distillery has huge potential, absolutely huge potential, and, frankly, it was with great sadness that we relinquished ownership.”

With 12 years at the helm of the BenRiach Distillery Company, it’s clear that Walker still felt he had work to do within the group. One of his biggest regrets, he admits, is the lack of time his team had to work with Glenglassaugh. While the company was able to conduct a lot of work into wood management and filling liquid into casks, the prospect of selling was on the table before more could be done. “Once you have taken the decision to sell, you have to break the cord,” he says. “But that was one of the regrets we as a team had, not just me personally, but as a team, that we didn’t have enough time with Glenglassaugh because that could have turned out to be a bit of a diamond as well. But, you know, that’s part of life.”

Still, a whisky entrepreneur such as Walker was never meant to be without a distillery for long, and in July 2017 Walker was making headlines again after agreeing to buy GlenAllachie for an undisclosed sum, along with Trisha Savage, former general manager at BenRiach, and Graham Stevenson, ex­-managing director at Inver House Distillers. “Graham and I had known each other for a long time,” says Walker. “Trisha’s worked with me for over 30 years. So I knew we had a team that was steeped in the industry, were passionate about it and had all the knowledge, experience and intellectual requirements to push us forward quickly and make it a success. We were surprised that the opportunity came so quickly – delighted, of course, but surprised.”

Much like BenRiach when it came under Walker’s ownership, GlenAllachie is little known to those outside the Scotch whisky-blending world. But for Walker, that’s half of the appeal: “We were delighted again to take possession of a distillery that is virtually a blank canvas. It’s a picture that is only now starting to be painted.”

A fresh start for Walker and his team, a chance to carve a new reputation in the Scotch whisky world. How, then, will his approach to GlenAllachie differ to BenRiach? “I’m not sure we are approaching it differently,” he says. “I think the model we have is pretty well tried and tested. It really is a slow burner to build a brand.” Walker is confident and assertive in his ambitions for GlenAllachie: “Our objective is to turn GlenAllachie into a very popular and demanded single malt whisky,” he affirms, refuting any possibility that additional distillery acquisitions could come about to further mirror his history with BenRiach.

Instead, Walker and his team’s focus will be on GlenAllachie as the group prepares to launch its core range of single malts in June. Belgium-­based Premium Spirits will be the first to stock the GlenAllachie single malt range, which will comprise a 10­-year-­old, 12­-year-­old, 18­-year-­old and 25­-year-­old. “The range will also include a cask­-strength release,” he adds, “and within a couple of years, we will probably plug in a 15-­year­-old.” Distribution has already been agreed in 12 markets, including China, the Netherlands, Taiwan and France, and the firm is confident the list will have risen to “over 30 countries” by the time the release date rolls around.

What’s more, 2017 was the 50th anniversary of the GlenAllachie Distillery, and to mark the occasion six single­-cask whiskies – including a 1978 vintage, two 1989 bottlings, two 1990 vintages and a whisky laid down in 1991 – are scheduled for release this year on a limited global allocation. Walker has been busy.

But these are not the only whiskies set to launch from Walker’s team this year. “We have not forgotten the wonderful blended product that we acquired – White Heather,” he insists.

The blend was first launched in the 1950s, but was discontinued in the 1980s. “We’re doing a lot of work with White Heather. We will reintroduce that into the market at the very top premium end,” he says, adding the release will most likely be a 21­-year­-old blend launched towards the end of this year.

Aspirations are also high for MacNair’s. Walker intends to turn the brand into a “richly peated” blended malt whisky, with a core range featuring a 21-­year-­old, 12­-year-­old and a no­-age-­statement expression. Bottles could be on shelves from this summer, not far behind GlenAllachie.

With so many irons in the fire, could a distillery expansion be required soon? “The distillery is amazing,” insists Walker. “It can produce over four million litres and it can store 100,000 casks. We will look at putting a small bottling line in to do single casks or very small bottlings on site. But the critical balance of the site is pretty good. We wouldn’t see any reason to expand these parts.”

And although he has contemplated building his own distillery in the past, Walker insists he has no real desire to start something from scratch. The possibility of moving into other whisky regions is also ruled out (though he has been involved in Irish distilling in the past). “It’s a combination of age,” he laughs, “but frankly, this opportunity is one we have to focus on significantly for the next three or four years. We don’t want to dilute our efforts.”

It’s certainly going to be a critical year for GlenAllachie. So what lies beyond the 2018 releases? “The responses to our launches will be a very important compass for us, and that will determine how much weighting we put to each of these, which direction we go in and where we should focus greatest attention,” says Walker. “It’ll be up to the market to tell us where our next move should be.”