Marian Beke: ‘Owning a bar is a different business to making drinks’

Just two years old, Marian Beke’s The Gibson bar is one of the most acclaimed in London. Now, he tells The Spirits Business, global expansion is on the cards. 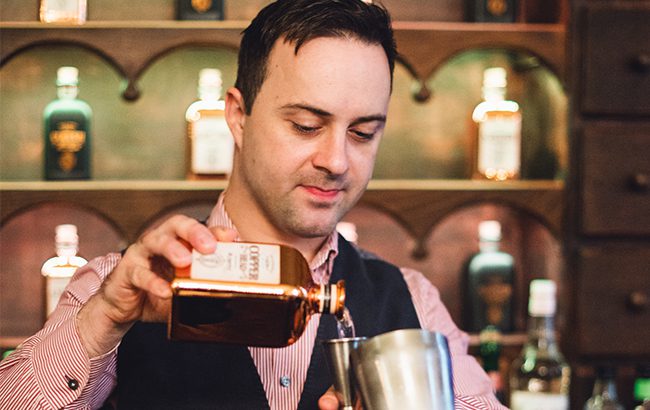 “My father has a wine business. When I was nine or 10­-years-old I was helping him in the cellar, so that was my first touch with hospitality,” Beke recalls of his childhood in Slovakia. “So I thought I’m gonna be a sommelier, because I like wine, and all my youth I was surrounded by it.”

But it was a trip to Prague that made the Slovakian native consider a life behind the bar. “When I was 17, I experienced my first American­-style cocktail bar. Prague was always a bit ahead of Slovakia, and it already had three or four of these bars, and that was life changing.”

Not satisfied with the prospects of becoming a sommelier, he found the idea of bartending eye­-opening. “I was amazed at the possibility of customisation; a bartender asks the guest how they would like the drink, whether it be sweet or sour, and they can tailor every drink to the guest,” says Beke. “As a sommelier, you open the bottle, you smell, sample, recommended food, but there’s not much else you can do.”

After a year working in a cocktail bar in Bratislava, Beke moved to London, where he worked in a number of venues until he landed a job at New Orleans-­inspired Nightjar in Shoreditch. During his time there, he curated cocktail menus for the much-awarded venue, where he became known for his extravagant garnishes and unbounded knowledge of cocktails.

But after five years at the helm of Nightjar, he took the “natural next step” and opened his own venue, The Gibson, in London’s Old Street, in 2016. “Any bartender will tell you that our job has a creative side, where you can work for anyone,” he says. “But even at Nightjar, where the guys were really supportive from day one, I found I had a vision that I could only make happen with my own bar.”

Beke is humble about the early success of The Gibson – a small Art Deco-­esque bar in an Edwardian-­listed building – which entered the World’s 50 Best Bars list at number six within weeks of opening. “It’s been a long and slow process and a lot of hard work,” he says. Beke is set to release a new cocktail menu in a similar calendar format to last year’s list, with the months representing the flavour profile of the drink. “This year we’re gonna make the drinks more entertaining,” he tells me.

He maintains there will still be a focus on the Martini, with a pickled onion Martini and pickled vermouth on offer. “We’re also gonna introduce some Martinis that people find fun,” including a “special bitters high in acidity”, which changes the colour of drinks from blue to purple, as well as a fizzy Martini that’s served from the freezer.

Beke is also keen to experiment with ice, replacing ice with a homemade sorbet; an example he uses is a Negroni with a black pepper or balsamic vinegar sorbet. Another will be served with Parmesan cheese ice cream. He’s also creating a bacon-­infused advocaat liqueur, as a play on English breakfast. “We actually make it into a beautiful Gin Fizz, like a drink from the ’70s or ’80s, and top it with egg-­and-­bacon advocaat ice cream.” In addition, the bar is set to have its own namesake gin and vermouth. “The idea was to have two products that build The Gibson Martini,” he says.

The vermouth, which has been created in partnership with producer The Jerry Thomas Project, is currently ageing. The Gibson gin is set to launch this month, in co­operation with Belgium’s Copperhead distillery. “They did a savoury version for us. In the distillery we added pickling spices and 14 botanicals, including pepper and ginger. “I could see once we opened The Gibson that a lot of people were a fan of savoury drinks, so we started using chutneys, relishes, balsamic vinegars and brines. I thought there could be a savoury gin even for a gin and tonic. Instead of lime or lemon, or Hendricks’s and cucumber, you put your favourite pickle in, like pickled beetroot or pickled gherkin. We tried that in a gin and tonic and a Gibson Martini, with an interesting twist, using savoury gin.”

As for the challenges of opening a bar, Beke believes it’s not all about perfecting the cocktail list. “Bartenders need to realise that when they open the bar, the drinks are actually the last thing in the business. A good bartender will not automatically be a good bar owner. I’ve seen bar owners who have 15 venues and don’t know how to make a drink. Owning a bar is a different business to making drinks.”

This year, he believes The Gibson will be complete. What does the future hold for the venue? “Maybe this year, we’ll expand. I’ve got a few partners in Asia who want to open The Gibson there. It’s a very interesting market but far away, so we need a local partner. I think The Gibson would be amazing in New York; people there love Martinis, boozy drinks and pickles, and our design is very New York, so I can really see it as a concept there.”