As he follows his 24/7 London bar with a new ‘local’, Duck & Waffle’s Rich Woods tells SB about his new book, cocktails on tap and his novel approach to sustainable bartending. 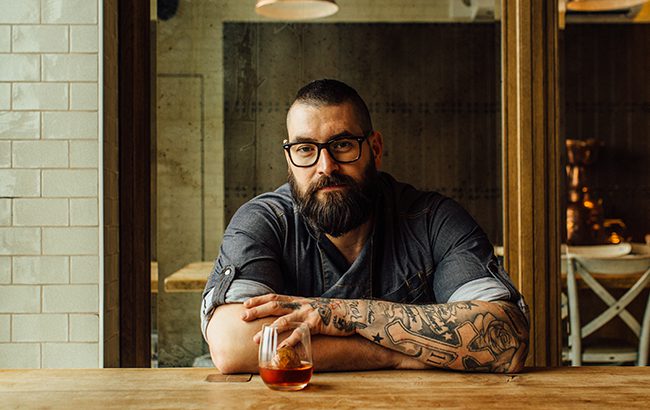 Duck & Waffle’s cocktail mastermind Rich Woods is pushing things forward in the field of sustainable drinking with creative cocktail lists that are prompting other bartenders to adopt zero­-waste recipes. Although his humble beginnings in the industry came from an operational side, he says he’s “always been intrigued by creativity”.

Taking roles at London venues Tiger Tiger and Cuban bar Floridita in Soho – now 100 Wardour Street – Woods worked himself up to the role of operational bars director, but ended up “pushing myself back behind the bar”, he tells me. “I’m curious by nature; I’ve always been a curious drinks enthusiast, even when I was more operational.”

Eventually, in 2012, he became head of spirit and cocktail development at Duck & Waffle and Brazilian-­Peruvian-­Japanese fusion restaurant Sushisamba, overseeing the beverage development for the two and opening locations in New York, Miami Beach, Coral Gables, Las Vegas and London. As we sit 40 floors up in Heron Tower at round­-the-­clock restaurant and bar Duck & Waffle, he says: “Here is most definitely, in terms of creativity, where I find my passion.”

Woods was able to create what he calls his ‘dream bar’ there – an island bar that is highly efficient and is also eco-­friendly.

“The idea was that we wanted to build a chef-­driven bar that had the same ethos and approach that an executive chef would have in the kitchen,” he explains, “in the sense that he has a chef running a particular section, and everything goes via the head chef. And it’s the same in the bar, you’ve got three or four bartenders making checks, which means drinks are coming out quicker.”

In terms of waste, the bar has glass frosters – so that every glass can be frosted rather than chilled in refrigerated drawers – and a machine that recycles the waste ice after the cocktails have been shaken, which is then recycled back into the water system. “So we’re actually reducing the amount of ice that we’re producing, which therefore reduces the amount of power and output,” he says.

For Woods, zero waste is also at the forefront of his cocktail menus. Last summer, he released Urban Foraging vs. Urban Decay, containing food waste and ingredients foraged in London.

Urban foraging “highlighted that you don’t have to get your raspberries from outside of the British Isles or your citrus fruits from South America, there are decent growers closer to you”, he explains.

Cocktails from the Urban Decay section “showed ingredients considered to be past their best can be reused, to great extent” – including banana skins, tomato stalks and leaves, asparagus ends and burnt toast. “It’s a trend that shows no sign of slowing down, and rightfully so,” he adds.

The menu also led to his next concept, Origins, which launched in June. “With all the menus I’ve done, there’s always been a theme that runs through them. When we were looking at Origins, we’d already shown that the by-product element can be used. So why don’t we look at just taking that one element? I wanted to show the various levels and complexity of flavour that could be obtained from multiple elements of a single source.” He uses orange as an example: “We take the zest of the orange and the pith, and just cook them off with sugar syrup, so you’ve got a not­-as-­powerful, but just as fragrant, orange cordial. Two elements from one ingredient.”

Woods is keen to keep the details behind his next cocktail menu under wraps. He does tell me, though, that there will “definitely be a Christmas menu, but it’s a kind of a work in progress”. Deliberately vague, he adds: “I pulled out quite a few stops [on the last Christmas menu] but I’m going to better it.”

Looking to 2018, he reveals one idea for a cocktail menu. “I’ll tell you this much, before someone else does it, I want to do a menu, I’ve already got the name, it’s called Colourblind. And it’s based around how colour affects our perception of flavour. The menu will aim to mislead guests into flavour through colour.”

And now, his sky-­high venue is set to produce another Sushisamba, this time taking the concept to Covent Garden with an opening date of early 2018. “It’s gonna be massive,” he adds. “It’s bigger than here, in terms of its dining capacity anyway.” The venue follows hot on the heels of Duck & Waffle Local – a new fast-­casual, chef­-curated restaurant with a focus on duck dishes – that opened in May in St James’s Market. “We wanted to bring the concept of Duck & Waffle down to earth, quite literally. No reservations, in and out. Just approachable. So we started playing with the idea of putting cocktails on tap, hence the idea of the Taps & Tails menu,” he explains.

The new venue features 20 taps, dispensing beer, wine, and cocktails. However, for Woods “getting people’s heads around the idea of serving a cocktail from a tap” was a challenge. “The concept of seeing it come out of a tap in 10 or even five seconds is just beyond people’s comprehension.” While the trend certainly isn’t new, he believes it has a future. And there are certainly plans for expansion: “We want to take the idea of Local, and roll it out so that there are maybe three or four in London, or Tokyo, Hong Kong and Singapore.”

Moving onto his next project, his new book, The Cocktail Guy, is out for pre­order on Amazon, with a release date of 2 November. Split into three chapters, the first is inspired by gardens and the outdoors, the second is based on the kitchen, and the third, which is “more geared towards the professional”, will focus on “classics but with a new approach”. Summing up the book, he says: “It’s really about how I approach drinks, how I look at flavour, and also demystifying what people believe is a far­fetched approach. Everyone assumes a lot of what I do is smoke and mirrors and very complex, when what I’ve actually tried to do with this is say it’s really quite simple. It’s for the regular person. You just need time, equipment and the willingness to learn.”

Managing cocktail menus for multiple bars, opening new sites and a new book – what’s next? “We will have three new brands, but I can’t tell you much more.” He also mentions new partnerships and collaborations with brands, although, again, he declines to divulge any details.

When I ask what his ultimate career goal is he says it is simply “to have my own place”. He adds: “It’s never been a bar for me, it’s been a venue. It could be a restaurant with a bar, or café, coffee shop, apéritivo bar. It would be designed and built and run as I have approached everything I’ve done since my first job in this industry, which is with an operator’s mind, but a bartenders heart”.

And he’s keen to do more. “I just think there’s so much to do. It’s exciting. I hate being bored – I need to do new stuff. I’m not slowing down, I’m only gaining pace.”