Molinari sambuca became the spirit of Rome’s dolce vita, capturing a generation of Italians through its innovative marketing.

The camera pans in on a pair of woman’s legs, from ankle to upper thigh then to a white fur coat. An Italian stallion declares passionate love as his hand strokes the cheek of this blonde bombshell, her eyes closed in ecstasy. But as he extols the beauty of her skin and its smell of sambuca, her eyelids spring open. She pulls a gun and purrs: “You don’t say sambuca. You say Molinari.” And with that, our leading man slumps to the ground.

This Italian television commercial from the 1970s was risky when even ads for underarm deodorant were banned for being improper. Before the media tycoon­-turned­-prime minister Silvio Berlusconi and his TV channels full of banal chat shows and stripping housewives came onto the scene, Italy’s television output was pious, yet respected. “When you were on TV at that time, you had real credibility,” says Mario Molinari, international sales director for the family-­owned sambuca brand. “Even though it’s a very old brand, the perception among Italian consumers today is that Molinari must be 150 because we’ve been on TV since the very beginning.”

Molinari Sambuca Extra was created in 1945 by Angelo Molinari, an experienced ‘liquorista’ in the port of Civitavecchia near Rome. “He was a self­-made man with a real understanding of what marketing was,” says Mario, his grandson. He began supplying the bars on Rome’s Via Veneto, the street made famous by Federico Fellini’s 1960 film La Dolce Vita. As well as starlets and paparazzi, politicians gave Molinari some welcome free publicity when a bottle was thrown in parliament during a fight.

Sambuca comes from the Mediterranean tradition of clear, anise-based spirits that stretches from French pastis to Turkish raki. The Italian version is sweeter and was pioneered in the mid-­19th century by Luigi Manzi, which was bought by Molinari in the 1970s. “We use star anise from Asia, while sambuca is usually made from green anise,” says Mario Molinari. “Very quickly we became a massive brand in the north, especially in Milan and Brescia.” To meet the demand, new manufacturing plants were built, including Molinari Sud, based between Rome and Naples, with its high­-speed bottling line that could shift 60,000 bottles a day.

Meanwhile, the marketing focused on brand­-call, urging Italians to request a shot of Molinari by name, just as the French were taught to ask for ‘Un Ricard’. The link to Rome began to fade, and “today most Italians wouldn’t know where it’s from”, says Mario Molinari, yet the city did help create the enduring bond with coffee, which he says is “very important to sambuca”.

The Via Veneto bartenders fuelled a craze for sambuca ‘con la mosca’ or ‘with the fly’ – that is, a roasted coffee bean. Other versions include three beans for health, wealth and happiness, seven for the city’s seven hills, while some lit coffee beans in a flaming sambuca. This added to the sense of theatre and also played to the ritual of Italian coffee drinking, since most Molinari was then being consumed in an alcoholic espresso, or caffè corretto.

For Mario Molinari, bitter coffee and sweet sambuca is a “perfect match”, but it defines only one market for the brand. “We have two target audiences,” he explains. “We have 40­ to 50­-year-­old consumers who like to have it after lunch or dinner, and we try to catch them with the corretto ritual. For a younger target audience who are around 25, we have a shot, or what we call ‘a shot with heritage’.” Molinari is keen to distance itself from the tacky end of the shot market, and has never indulged in any quirky flavour varieties. The only flavour extension has been Molinari Sambuca Caffè, launched in the 1950s.

Then came the brand’s ‘Bevi poco… ma bene’ (‘Drink less, but better’) campaign, which ran long before the big shots in spirits had signed up to ‘responsible drinking’. Mario Molinari describes his grandfather as being “30 years ahead of his time”, and someone who “understood that sambuca needs a good, responsible consumer”. He adds: “Also, if you get drunk on a sweet liqueur you might not touch it again.” So there may have been a touch of self­-interest in the move.

Today, the brand dominates the Italian on-trade for sambuca with an 85% share, claims Mario Molinari, quoting Nielsen data. Exports, which began in the late 1960s, now account for a quarter of sales and are growing year on year. “The first country in which we built Molinari as a brand was Germany, where it is now distributed by Campari,” he says. In terms of opportunities he mentions India and Asia Pacific, and adds: “Northern Europe is also doing better and better.” But the US, with its myriad Italian restaurants and big expat community down the East Coast, remains a tough call, and not just because of the ever­-contracting three­-tier distribution system that favours the big guys. Unfortunately for Molinari, the go-­to brand in the states is Romana Sambuca, which is owned by Diageo. But elsewhere the renaissance in Italian spirits through a thriving cocktail culture is proving exciting. If brands such as Fernet Branca can burst out of the Italian on-­trade and shake off the dust, so can Molinari.

“It’s a very strange thing,” says Mario Molinari. “In Italy, cocktails disappeared 20 years ago, and in Rome you had to go to a five-­star hotel to get a good one. But it’s now changing with this new trend for drinking Italian cocktails that come from the US and UK, which we are re-­importing into Italy.”

Since 2015 the brand has sponsored a mixology programme on Italy’s Fox TV channel; the winner is appointed Molinari’s brand ambassador for a year. There is a large cocktail menu on Molinari’s website, and Mario Molinari personally recommends a Cucumis Collins with sambuca, cucumber, water, lime and a basil leaf. And if your bartender is a femme fatale in furs, don’t forget to use the brand name.

Click through the following pages to see the timeline of Molinari’s brand history. 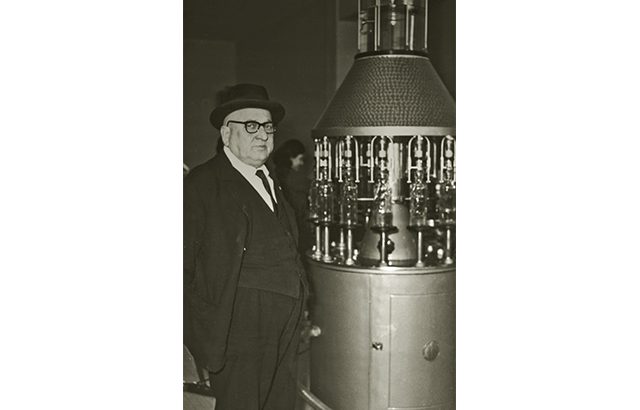 1959 After 14 years as an artisan spirit, Molinari goes into full commercial production 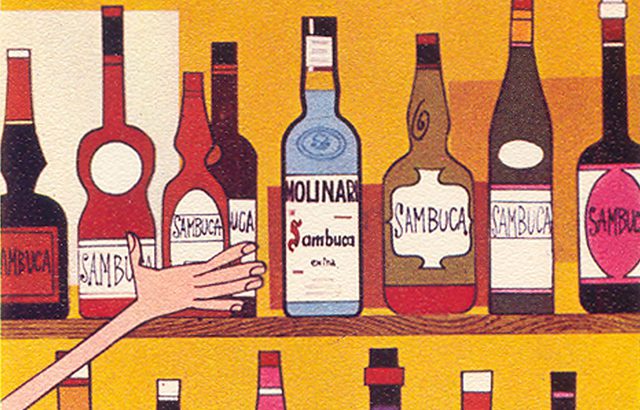 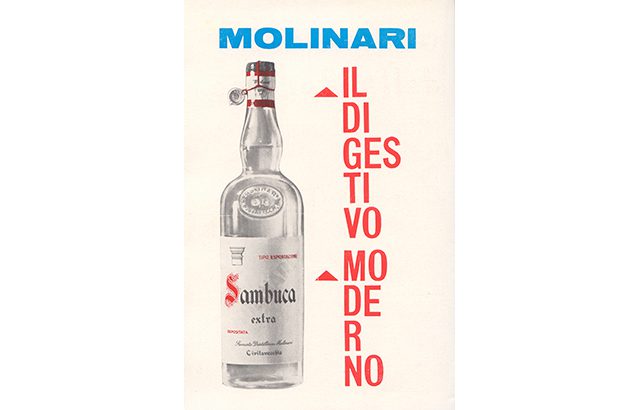 2005 Molinari unveils ‘the one and only’ campaign