SB speaks to David Wondrich about the history of Punch, its recent revival, and the trick to making the perfect bowl. 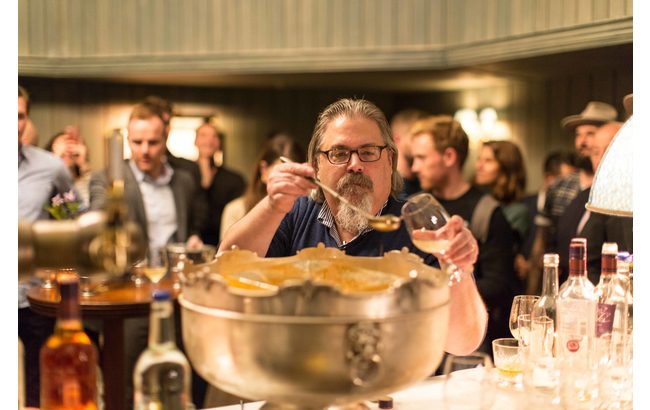 Tell me a little about your career.
I was originally an English professor, and then I started writing about spirits for Esquire magazine a couple of years earlier, and that was much more fun than being an English professor. I quit one and did the other full time and I’ve been doing it ever since. I still do a lot of teaching now, which is fun, because I can teach with a drink in my hand and all the students have drinks in their hands, so everybody’s happier. It takes the anxiety out of the equation when you drink together. I now write a drinks column for The Daily Beast, have written four books on cocktails, and I’m the editor in chief of the forthcoming Oxford Companion to Spirits and Cocktails.

What has kept you interested in spirits and cocktails over the years?
The people and the stories, really. Cocktails are cocktails; I like a fine cocktail but I’m happy with the really simple classics. The history is always fascinating. It intersects every kind of history there is, including travel and exploration, cultural history, military history – everything. That’s fun. The people in the business are very hospitable and welcoming so that makes it all the more pleasant.

Your newest book is called Punch. What has inspired you to help revive Punch?
When I first started writing about drinks and getting published I’d have people over and they’d expect me to make them cocktails, and once you get behind the bar your friends turn into jerks. It’s amazing how that happens. Suddenly they’re being demanding and entitled, and generally showing all the bad habits of bar customers. So I started getting tired of mixing drinks for them, and began exploring old Punch recipes – this was in about 2002. At first I was not very good at them, but then eventually I learnt a few tricks about how they were supposed to work.
It became a lot of fun for parties, and it’s something you can do in advance. All the work is done and you can return to your delightful job as host. That works in a commercial setting as well. It enables you to pay more attention to individuals. It puts everyone on the same footing at a party, which I like. A bowl of Punch is a project: here we have this bowl in front of us, we have to empty it. We’re all in it together, instead of “I’m having this and you’re having that”.

You’re collaborating with Banks Rum with the new project. How did it come about?
I’ve helped them out. I wrote a little booklet for them, and I know the people from Banks. I like the people and the rum, and I’m happy to help out. I’ve known Jim Meehan, a partner in the company, for many years.

What are the most interesting things you found out in researching for the book?
Punch is the “grand-daddy” of mixed drinks. It’s the first popular mixed drink based on spirits. It’s also uniquely English. As far as the world can tell, it’s an invention of English sailors or merchants in the India trade in the early 1600s. They were very far from home, and beer was very hard to get so they had to improvise. They came up with this idea of an artificial wine based on spirits. The English didn’t drink spirits at the time – they were alone among the Northern peoples in that – so they were waiting for it to be done right, I think. They figured it out and it spread to the whole world.

What are your top tips for making a good Punch, and what should people avoid doing?
I think the most important things are it shouldn’t be too spicy and it shouldn’t be too strong. Punch is a session drink, it’s not like a cocktail where you have a few sips to make an impact. With Punch you’re supposed keep going back to it to finish the bowl. You’re not supposed to get tired of it after two glasses, so it has to be a little on the subtle side. If it’s too strong, bad things happen.
What’s been your favourite spirit or cocktail to research?
Punch was a really good one, but I’ve researched so many over the years. The Manhattan, the Martini … the Margarita has a really complicated history. It goes on from there.
A lot of them seem to have quite murky histories, don’t they? No one’s really sure where they came from.
It’s history that happens in a bar. If you ask people on a Monday what happened on Friday night in the bar, they’re going to have a hard time all agreeing on the same story, so you run into those issues. It makes it a little challenging, but that’s also the fun part. It’s detective work; taking all the stories and seeing where the sense lies in them.

Have you got any other projects in the pipeline? What are you doing next?
Next I’m working on the Oxford Companion book, and that’s pretty much everything. When that’s done, we’ll see. I’ve got other book ideas, but right now I have to focus on the current one.