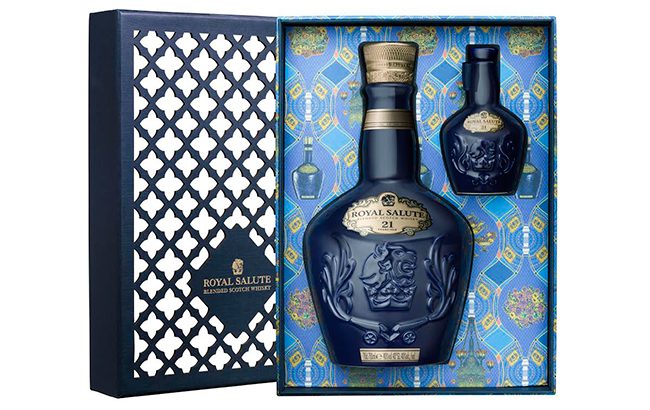 The pack features a “laser cut lid design” with an interior print of blue and gold created in collaboration with wallpaper designer Angela Groundwater. The pack holds a bottle of Royal Salute 21 Year Old, as well as a miniature version.

Royal Salute originated in 1953, with the first batch developed as a gift for the Queen’s Coronation. Gifting remains “at the heart of the brand” and this new pack pays homage to “the legendary Regent’s Banquet of 1817”, an event held in the Brighton Pavilion where more than 120 exotic dishes were enjoyed

Peter Moore, Royal Salute brand director, said: “Christmas and Chinese New Year are times of ultimate celebration and indulgence so we wanted to create a limited edition set that reflected this. What better way to toast the festive season than with Royal Salute 21 Year Old, especially when it comes housed in a gift pack this special?”

Angela Groundwater said of the collaboration: “I wanted to capture the splendour and magnificence of the Regent’s Banquet with a design reflective of the brand’s time-honoured royal heritage.”