Cotswolds Distillery is on schedule to release its inaugural whisky in October this year, and has also revealed plans to expand its gin production.

Speaking to The Spirits Business last week, founder Daniel Szor said 4,000 bottles of Cotswolds Single Malt Whisky will launch in October – however 2,500 bottles have already been sold, and the final 1,500 bottles will be allocated to the distillery’s on-premise shop. After this inaugural release there will then be a steady release of bottles to the market each month.

Cotswolds Single Malt Whisky is made exclusively using Cotswolds-grown barley and 100% floor maltings, while each bottle will list the individual farm from which the whisky’s barley was sourced.

“For me, to be able to know the farmer who grows my barley, and who offers me a ride on the combine, is amazing,” said Szor.

Currently, Cotswolds Distillery produces 130,000 litres of pure alcohol a year for its whisky, while its production of gin is “about half of that”, Szor added. However, the distillery plans to add another Holstein still in September, therefore doubling gin capacity.

After raising £1.5 million in crowd-funding earlier this year, Cotswolds Distillery also plans to expand its on-site bottling with a new bottling hall, which will have two lines – one for gin and one for whisky.

Currently, Cotswolds Dry Gin is bottled by volunteers – dubbed the ‘bottling angels’. “We have 600 people on the current list wanting to volunteer,” said Szor. “We also have ‘peeling angels’ [for the gin’s botanicals] who do the same thing.”

Cotswolds Distillery’s inaugural single malt hits the three-year maturation mark on 23 September. As such, a ceremonial barrel of the whisky will be bottled during Whisky Live Paris next month. 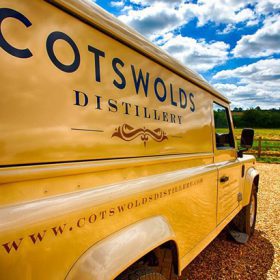 While most of the distillery’s whisky is aged in a bonded warehouse in Liverpool, a small on-site warehouse stores a number of casks to enhance the visitor tour experience. The distillery welcomes roughly 32,000 tourists a year.

Cotswolds Dry Gin is currently exported to 23 countries, and “no-one who has our gin doesn’t want our whisky,” said Szor. “Our gin is 80% sold in the UK and 20% exports. We think our whisky will be more like 50-50, or even switch the other way.”

Cotswolds Distillery started production in 2014 with the assistance of Scottish master distiller Harry Cockburn and maturation consultant Dr Jim Swan. Now, the distillery is run by local workers with no previous industry experience.