Gin may have exploded in popularity, but does that mean quality is stretched thin? Not at all; this year’s Gin Masters competition showed the depth of excellence that exists within an exciting sector.

The almighty growth of the gin category in recent years has been nothing short of remarkable. Propelled by an advancing global cocktail scene, mounting consumer interest in locally made products with heaps of heritage, and an evolving taste for bitter drinks among imbibers, gin has well and truly made itself comfortable at the top of the spirits pedestal.

But with such success comes the risk of complacency, some critics may argue. Nevertheless, the gin sector is seeing more experimentation than ever, as a number of near-­forgotten styles join the ranks of back­-bar staples once again. An increasing number of producers are looking to unusual base ingredients, quirky botanicals, and terroir­-driven flavour profiles – at the same time as maintaining a key focus on quality – meaning there has never been a more exciting time to sample more than 150 gins, which collectively represent the spectrum of the category.

And this was precisely the task for our judges in The Gin Masters 2017. Sixteen spirits experts gathered at The Holy Birds restaurant and bar in London to assess the state of the category, blind tasting an enormous pool of entries divided by price and variety. Each expression was judged on its own merit and scored according to appearance, nose, taste, and overall balance.

The first category to come under scrutiny was Standard gin, which produced just one singular medalist – Aldi’s Oliver Cromwell London Dry Gin. A panel consisting of Ben Lindsay, director at Garnish Communications; Ben Manchester, bar manager of Hubbard and Bell at Soho House; and Brian Calleja, bar manager at the Bloomsbury Club; chaired by me, Amy Hopkins, deputy editor of The Spirits Business, praised the gin for its “classic juniper nose” and “good mixability”, and duly awarded it a Silver medal.

Moving swiftly up the price ladder to the Premium flight, and my panel agreed on a trio of medals: a Gold for Welsh gin Brecon Special Reserve, and two Silvers for Greenall’s Extra Reserve and Barrister Gin. Lindsay enjoyed Brecon’s “beautiful balance”, while Calleja highlighted its “nice long finish”. On the broader premium gin market, Manchester observed that consumers generally look for “something more than one dimensional, but not incredibly complex” that would act a “crowd­ pleaser” when mixed with tonic. 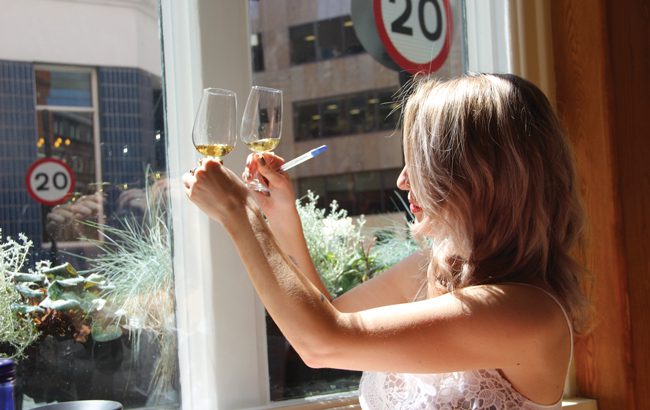 A mammoth Super Premium flight – which was divided between three judging panels because of its size – came next, and yielded an impressive six Master medals – the most of any round throughout the competition. Kicking off the haul of mighty Masters was Sir Edmond Gin, which surprised judges with its heavy vanilla nose, but complex juniper­-forward palate. “For a gin with such a difference between nose and palate, it would be easy for it to be unbalanced – but it worked. It was a pleasant shock,” said Manchester. Lindsay added: “They should be proud to pull off something other people can’t.”

Overall, Gorn was impressed with the round: “There were a couple of beautifully expressive and balanced entries here, with some excellent textures – superb sipping gins.” My panel in particular was pleasantly surprised by the diversity and creativity on display. “This just goes to prove that gin isn’t a one­dimensional category,” said Manchester. “Producers are looking to get their noses in front with points of difference. But it shows you can be different without being gimmicky.”

Hopes were high going into the Ultra Premium round – but Master accolades were demonstrably absent. Quality was, nevertheless, evident across the category, and an array of Golds (12 in total) and Silvers (10) were awarded. On my panel, Lindsay described Tiger Gin as “more viscous than anything else I have tried today”, while Manchester said of Masons Yorkshire Gin – Tea Edition: “The nose is certainly unusual, but then you taste it and it’s great. Lots of bergamot.” 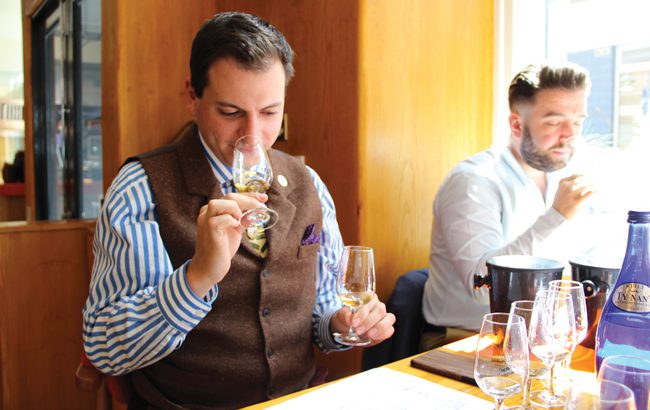 The panel felt that while Ultra Premium showcased some solid, well­-integrated, and balanced gins, the category was generally lacking in experimentaon. “It showed producers can be a bit braver,” commented Lindsay. “When they make a £40 gin, they tend to play it safe.”

Moving on from price to style, and three panels tackled a significant pool of London Dry gins – by far the largest round of the compeon. Gorn’s panel took the first relay and had a clear view of what they were expecng. “London Dry is a consistent style of gin – usually you know what you are going to get and you do get it,” said Duffill. “For me, it’s one of the best categories – simple and elegant, just as gin should be.”

Mirroring the high expectaons for the round, just one Master was awarded. Krisane Sherry, editor of The Spirits Business, led a panel consisting of Nicola Thomson, director at 1571; Luca Cordiglieri, president of the UKBG; and Anna Marnez, head bartender at Street XO, who described the Master recipient, Catz Dry Gin, as “divine”. “I loved this one,” raved Thomson. “There were so many lovely herbs and spices on the palate – it had the freshness of watermelon, along with juniper, and an infusion of basil and tarragon.” In total, 18 Golds and 13 Silvers were dished out.

Sherry’s panel then turned their aenon to a diminuve flight of Old Toms – traditionally a sweeter style of gin that has made a comeback in recent years. Bathtub Gin and Hernö were both applauded for their Old Tom styles and received Golds, while Makar and Barrister were given Silver medals. However, one expression stole the show and was duly named Master – the cask­-rested Citadelle Gin No Mistake Old Tom Gin. “The barrel-­aged elements work really well with the Old Tom style,” observed Sherry. “It’s also really delicate.”

According to Thomson, the future could be bright for Old Tom. “There’s no reason why Old Tom can’t grow with the rest of the category,” she said. “There’s a lot you can do with it – it’s really nice on its own with ice or you can whack it into a cocktail.”

Experimentation, cutting­-edge techniques, and a focus on less traditional flavours were expected in abundance going into the Contemporary round, which resulted in two Master medalists: Four Pillars Spiced Negroni Gin and Hernö Old Tom Gin. On Smith’s panel, Constable commended the “soft, elegant and clean texture” of the Four Pillars bottling, and “smooth, silky” quality of Hernö. 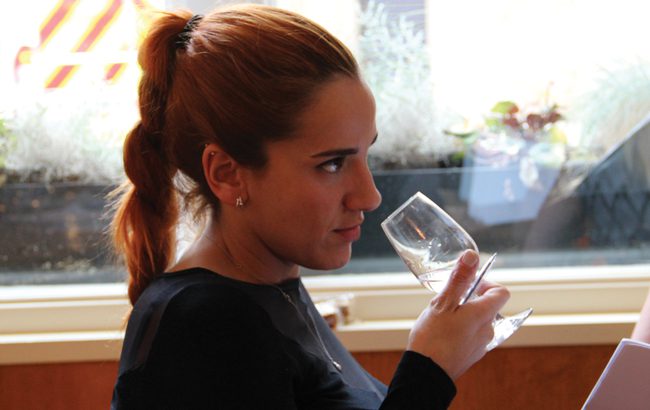 Smith said of the Contemporary round: “It’s fantastic to see so many juniper­-forward gins that also have a bold secondary botanical. They anchor what gin is, while still moving the category forward.” However, Gorn, whose panel also judged the flight, said the vivacity of some Contemporary entrants led to a “loss of balance and finesse”.

In my panel, we turned our attention to the Microdistillery round, where every entrant was awarded a Gold medal – an extremely rare occurrence in The Global Spirits Masters series. Of Bullards Norwich Dry Gin, Calleja said: “I really like the cardamom notes here, and the hint of spice. It was quite peppery, so I could imagine it in a Martini with some cardamom bitters.” Also among the Gold standard lot, Spruce Gin was praised for its “complex, almost challenging” profile.

Manchester said of the round: “It has shown that there’s a very high standard among microdistilleries. It was very good across the board, and it shows that it’s possible to experiment while keeping a more classic style of gin.”

Following a diminutive round of Organic gins – where Hernö’s Old Tom edition and core expression bagged a Gold and Silver medal respectively – came an equally small selection of Genevers. Both By the Dutch Old Genever and Smeets Extra impressed my panel, and were likewise given a Silver and Gold. Lindsay said that while both expressions were to be commended, he would have liked to see a “more classic style of genever” on display.

Then, to one of the most anticipated flights of the day – Cask­-Aged – where an impressive five Master medals were bestowed by Gorn and Smith’s panels. Gorn enjoyed Martin Miller’s 9 Moons Barrel­-Aged Gin’s “smooth mouthfeel and long finish”, the “expressive” nature of Copenhagen Oak Gin”, and the “crisp cucumber” flavour of Makar Cask­-Aged Gin.

Meanwhile, Smith’s team gave the highest accolade to Citadelle Gin Réserve and Hernö Juniper Cask. “The sheer range of cask gins judged today illustrates the current innovations in the category, with many distilleries moving beyond simply oak ageing in ex­Bourbon casks,” commented Smith. A further eight Golds and three Silvers were awarded in the round.

Smith and Sherry’s panels then prepared their palates for the Navy Strength round – which showcased expressions bottled at or above 57% abv. Hernö Navy Strength Gin was named Master for its “very refined style”, while fellow Master Medalist Four Pillars Navy Strength Gin was deemed as having the “wow factor”. A further seven Golds and two Silvers were awarded in the round.

“We are seeing a more nuanced approach to this category, with people moving beyond just releasing a stronger version of their normal gin,” commented Smith.

Often confined to Christmas drinks trolleys in the minds of consumers, judges approached the Sloe Gin round optimistically. “It’s great to see a serious approach to this category,” added Smith. Four Golds and two Silvers were duly awarded. “The sloe gins we tasted today were very approachable in style,” Smith said.

The final flight of the day – Flavoured – was also assessed by Smith’s panel. Judges were intrigued to see what flavours the round had in store, particularly as the starring role of juniper diminishes in line with increased experimentation among distillers. “Gently sweet and succulent” Spit Roasted Pineapple Gin – Batch 1 received a Master for its “lifted floral finish”. Its stablemate, Cherry Gin – Batch 1 was also praised for its “silky and juicy” texture, as well as its “subtly tartness”, and was awarded a Master.

With a wealth of Master, Gold and Silver medals bestowed, the level of excellence across the competition was clear. Judges were particularly impressed that increasing innovation has not seemingly resulted in less well­made spirits – it is good to see that the basics have not been forgotten.

“We’re seeing an improvement in quality and an increase in innovation, but also an improvement in how people are innovating,” concluded Smith. If excellence and newness continue to develop in tandem, spirits lovers have plenty of reasons to feel optimistic about gin.