Drinks trade show organiser Vinexpo has signed a memorandum of understanding (MoU) with Chinese giant Alibaba Group as it seeks to up its presence in the e-commerce space. 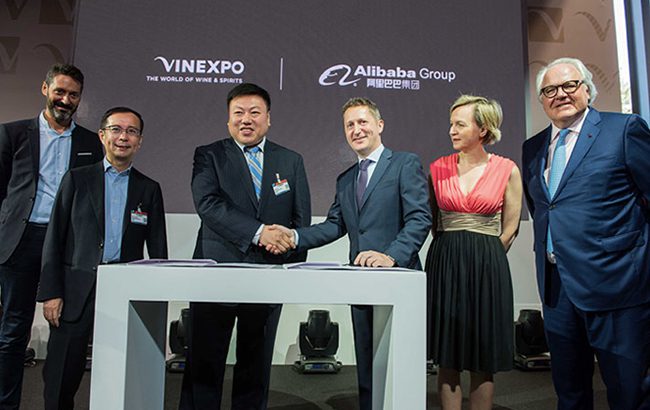 Signed yesterday during the opening of Vinexpo Bordeaux 2017, the MoU marks the start of a four-year collaboration with Alibaba’s Tmall and Tmall Global e-marketplaces becoming Vinexpo partners.

The biennial exhibitions will be promoted across Tmall and Tmall Global, including the sites’ Facebook, Twitter, WeChat and Weibo social media platforms.

“This MoU underlines China’s growing prominence in the wine world as the fastest-growing market for high-quality wine with a huge potential,” said Vinexpo CEO Guillaume Deglise.

“Current trends show that China is on course to becoming the world’s top wine-consuming nation within the next 20 years. It also reflects Tmall’s pre-eminence at the forefront of the world’s biggest online market. Vinexpo is delighted to be co-operating with such a major force which will be playing a key role in the future of the global wine market.”

Lei Zhao, director of fast moving consumer goods at Tmall, added: “In accordance with our mission ‘to make it easy to do business anywhere’ we are pleased to be partnering with Vinexpo and cater to the increasing popularity of quality wines from all over the world to Chinese consumers.

“We look forward to collaborating with French and international wine producers and merchants to enable more and more Chinese consumers to fully enjoy the very best products the sector has to offer.”

In among all the wine exhibitors, Vinexpo Bordeaux 2017 has an improved focus on spirits, with a particular emphasis on speciality local drops. Click here for a preview of the 2017 event which runs until Wednesday.