Paterson: Whisky ‘learned its lesson when Cognac fought back’

Having recently celebrated his 50th anniversary in the Scotch sector, The Dalmore master distiller Richard Paterson reminisces about his early days in the industry, and explains why he has no plans to slow down just yet.

After half a century in any career, one could not be blamed for starting to take things easy. Not so for Richard Paterson, master distiller at The Dalmore Distillery and master blender for Whyte & Mackay. The whisky-maker is solidifying his rock star status in the Scotch world with a year-long international tour to mark his 50th anniversary in the industry. For Paterson, one of the most well-known faces – and noses – in Scotch whisky, 2017 is set to be among his “best years yet”.

Speaking over the phone from Scotland, he tells me that his trip started in Hong Kong and will continue to Beijing, Taiwan, Europe and the Americas. Paterson, who is almost as famous for his passionate and insightful oration as his distilling and blending prowess, is sure to draw crowds.

He will host a series of tastings and showcase two bottlings launched to mark the anniversary: The Dalmore 50, a 50-year-old single malt finished in rare Domaine Henri Giraud Champagne casks (costing US$50,000 per bottle); and The Dalmore Quintessence, a no-age-statement whisky finished in five types of Californian red wine casks (US$1,250 per bottle).

Of reaching the milestone, he says: “I look back with great pride and affection, and I’m actually more proud of the whisky industry now than I have ever been before. These days, there’s an awareness of these great products – not only in Scotland or England, but literally all around the world.”

Paterson has certainly played an important part in growing this awareness and has long been ubiquitous as an ambassador for the Scotch whisky industry as a whole. Before following in the footsteps of his father and grandfather, both blenders, Glasgow-born Paterson was given a visceral introduction to Scotch whisky at the age of eight.

“It’s a time I will never forget because my father handed me a whisky, and, of course my brother and I were just fooling around, which annoyed my father. That’s when he said: ‘Well, if you think this is so funny, tell me something about the whisky.’ I said: ‘I don’t know what you mean, dad.’ That’s when he hit me at the back of the head and told me I was just being stupid. 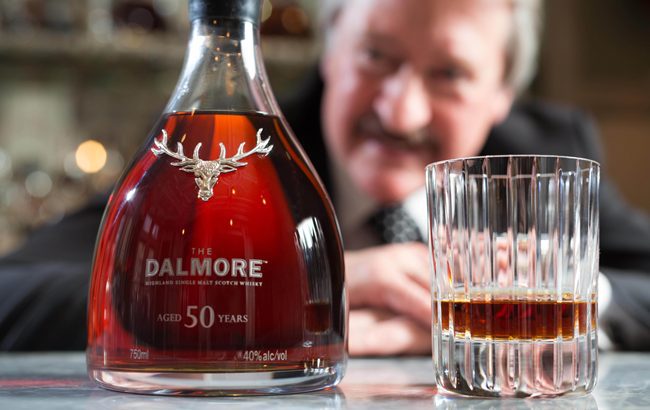 “Then he said: ‘Well, tell me, is it as heavy as your grandfather, or as light as your mother, or as sweet as your chocolate bar, or is it as dry as the dust on the floor?’ So, really, from the beginning I could tell if it was heavy and clumpy or if it had a sweetness and roundness like a chocolate bar. That was really the beginning of my stirrings in the industry.”

Paterson started his career in 1966, joining A Gillies & Company Whisky Blenders & Brokers in Glasgow as a general production assistant, moving to Whyte & Mackay in 1970 as assistant blender. Just five years later, at the age of 26, Paterson was named master blender – a role he retains to this day.

To deflect criticism from his contemporaries that he was piggybacking off his father’s success, Paterson went on to “study wines for the next 15 years and got involved in – and still get involved in – every aspect of blending and single malt creation”. His extensive knowledge of wine continues to be reflected in The Dalmore’s experimental programme of multi-cask maturation and finishing.

‘We were all complacent’

He says of his early days in the industry: “When I started out it was blended whiskies and the pinstriped brigade. Whisky was growing 10% a year and we were all complacent. Now we just cannot be complacent – we learned our lesson when Cognac fought back. We fought back by getting our packaging up to date and by getting the right whisky with the right promotions. We started to throw away the kilts and the bagpipes.”

The whisky maker identifies the rapid growth of whisky festivals around the world as one of the biggest changes in the industry during his tenure. “From New York to Frankfurt, these festivals really started to get people interested,” he says. “In the early days, they were more for blended whiskies than single malts, but then the stirrings started and single malts really took off, and we were a part of that.”

Paterson has also witnessed extensive change at Whyte & Mackay, one of the most notable of which was in 2014 when Philippines-based brandy producer Emperador acquired the firm. “Well, of my 50 years I have lived through about 11 takeovers and I am now on my 19th different boss, so I have seen a lot of changes,” he quips. “The changes that have taken place [at the company] mirror those in the industry – where blended whisky used to dominate now we are finding that, whether it be Dalmore, Fettercairn, Jura, or Tamnavulin, all these single malts are really coming to the fore. Also, we are seeing and commanding very high prices.” 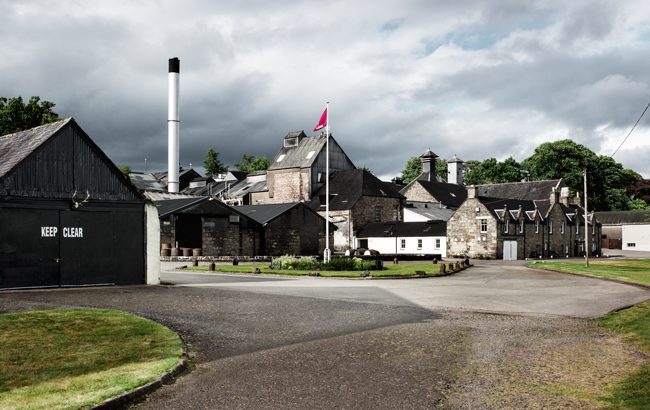 Despite such change in the sector, which has undoubtedly seen the democratisation of single malts, Paterson is unwavering in his view that ‘luxury’ continues to be a key word in Scotch whisky. “Luxury is so vital, but it has to have heritage and longevity, and it has to have reliability. Anything I put a signature to, make no mistake it has to be an absolute high level. I could not afford to release anything unless it hits that.”

He also confirms that The Dalmore Paterson Collection – which is still the world’s most expensive set of Scotch whiskies at £987,500 (about US$1.2m) – has failed to secure a buyer since its launch in 2014.

The range contains 12 rare whiskies that pay homage to the people who inspired Paterson throughout his career, and is accompanied by a 200-page ledger detailing the distiller’s thought processes when crafting each variant. Paterson says the collection has attracted a number of potential buyers, and he is “confident at some stage it will go, but at this price it’s going to take a bit of time”. He adds: “I just want it to go to the right person who will fully appreciate it – a bit like when someone wants to buy a dog.”

Perhaps more than any other whisky maker, Paterson represents a generation of ‘celebrity’ distillers and blenders – staunch ambassadors for their brand and the broader industry, who attend promotional events around the world and even star in marketing campaigns. These men and women, previously confined to backstage roles, are now the faces of their products.

“I have been put into a nice position, but I have to say it’s not to everyone’s liking,” he says of the trend. “You get some who don’t want to venture outside their sample rooms. I just like to make sure that I get a message over to consumers, saying ‘you must drink the whisky in this particular way’.”

He says of managing his PR and production duties: “It’s a balancing act and is not always easy. When a trip comes up you have to prepare a lot of things, but as soon as I get back, all the samples have come in. You can never lose sight of what you’re there for.” 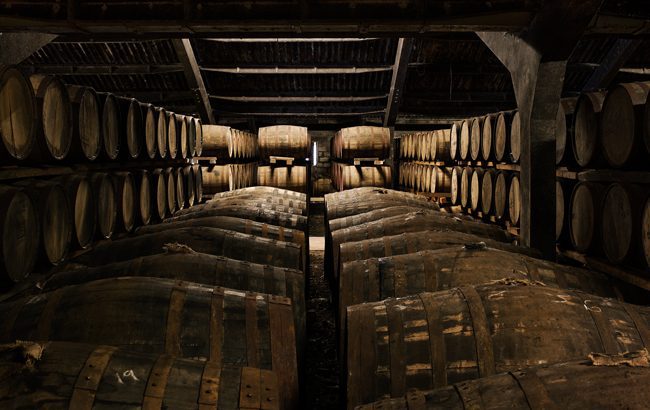 Paterson also confirms that he is “prudently” preparing to hand over some of his responsibilities to Gregg Glass, former whisky maker at Compass Box, who joined Whyte & Mackay in December. Paterson hand-selected Glass as his understudy and future successor, following an arduous recruitment process. But the handover process will be a slow one, says Paterson, who cites the eight-year apprenticeship of Brian Kinsman before he succeeded David Stewart as William Grant & Sons’s master blender and malt master for Glenfiddich.

“I will be talking the hind legs off a donkey and passing on as much information as I can, so hopefully [Gregg] will be able to take one or two of the reins. When I do eventually decide to hang up my boots, he will be there, ready to carry on.”

But Paterson reassures me that he won’t bow out of the industry any time soon, and intends to keep driving Whyte & Mackay’s innovation strategy, saying that “wine enhancements” will play a major part. “But not just wine, aged wine as well, very small châteaux, very small production units and really classic boutique styles.”

He is full of praise for collaborative projects between producers around the world, saying: “I love these kinds of things, especially when they give all the connotations of a great spirit and are real collaborations between one country and another.” In 2014, Paterson teamed up with Sherry producer González Byass to create Nomad Outland Whisky – a blended whisky aged for five years in Sherry butts in Scotland before being shipped to Jerez to age for another year in PX casks.

“This is a product that has really worked as a collaboration between Spain and Scotland,” he observes. “But if you want to get products like this to the consumer, not only does it need a great story, you need to spend the money promoting it.” 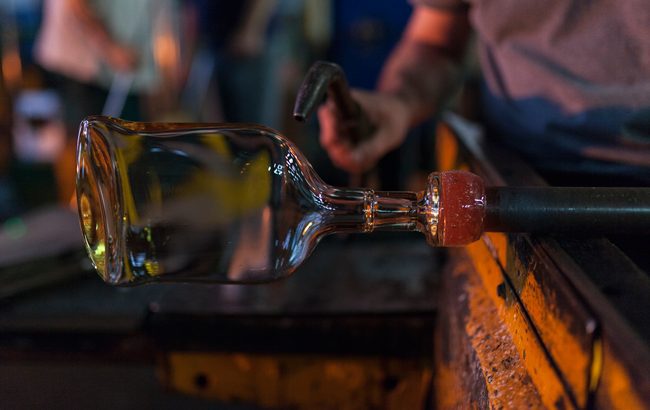 The Dalmore Distillery may have access to some of the oldest and rarest liquid in Scotland, but it has a near-constant battle to meet demand. “We have always had large stocks of aged whiskies, and that is something that will continue to grow,” states Paterson. “But looking into the future, which is always the biggest problem, we have to be adamant when we set down particular figures of production – we have to stay within these and cannot be over-generous.”

Looking into the future, Paterson believes his ideal whisky may still be created. “I’ve still got a lot of whisky to work with and I am always looking for the most perfect, the most different one – the one that’s out of the box,” he claims.

“I am still thinking about these things and am always looking to raise the profile of not just our own brands, but the Scotch whisky industry. It gives me such pleasure when our products come onto the market. When I eventually retire, hopefully I’ll still see many of them being enjoyed for years to come.”