Scenes in literature, film and television have been filled with an array of fictional beverages, from a Pan Galactic Gargle Blaster to a Glen McKenna Scotch – SB rounds up the best imaginary drinks.

From iconic American cartoons and comedy sitcoms, to sci-fi shows and magical worlds, fictional drinks are portrayed through many narratives.

A number of iconic television shows are fond of including an imaginary booze brand, such as the Saurian Brandy in Star Trek and the Flaming Moe in The Simpsons.

Some works of fiction naturally come with the existence of alcohol to enhance the imaginary society, and in some cases may serve to advance the plot of the story. Frequently, make-believe brands have been created to avoid advertising costs, serving as a stand in for other brand names.

Click through the following pages to see our pick of top fictional drinks.

Have we skipped one of your favourites? Let us know by leaving a comment below. 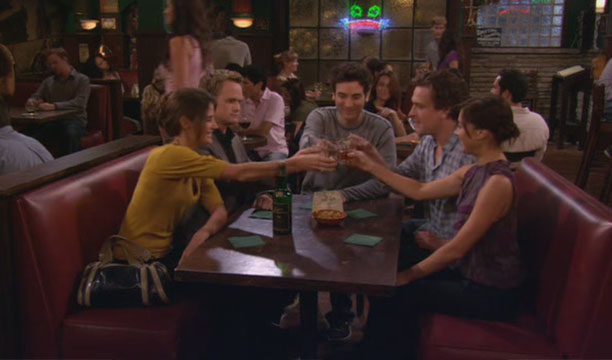 The fictional single malt made its first appearance in US comedy How I Met Your Mother in 2008 with a bottle of the 50-year-old Glen McKenna costing US$2,500. Ted Mosby describes it as “smokey, with a hint of aged cedar”. Despite its high cost, none of the gang could tell it apart from US$10 Scotch.

In another episode, Robin and Lily break Ted, Barney and Marshall’s bottle during a sword fight, and replaced it with a fake made of cheap booze, chocolate syrup, ketchup, and hand sanitizer.

It is also seen in the final episode as the gang sit at Maclaren’s for the last time and a bottle of 35-year-old Glen McKenna is shared between them. 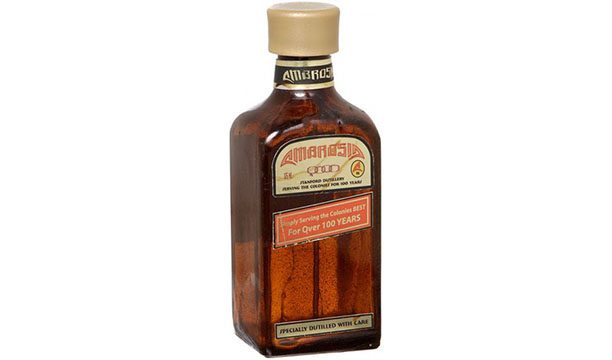 Known for being pretty potent, Ambrosia made its name in sci-fi series Battlestar Galactica, although its contents are a bit of a mystery. It is thought to contain nectar and appears to be a bright green colour, similar to absinthe. The drink makes several appearances throughout the series. Ellen Tigh pours a bottle of Ambrosia for her husband, Colonel Tigh, after they are reunited. In the episode The Long Patrol, Lieutenant Starbuck asks for a bottle of Ambrosia, and the waiter tells him Ambrosia is as rare as Tilinium. Luxury liner Cloud 9 also offers up the intoxicating serve in the bar. 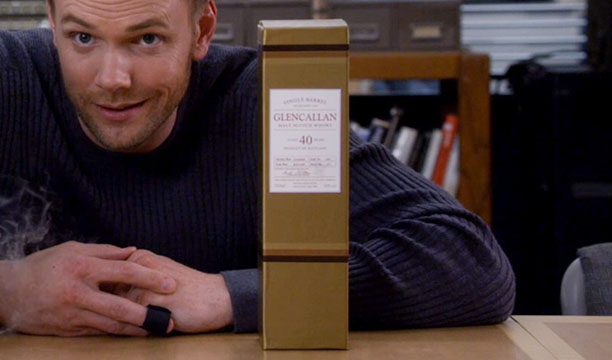 GlenCallan is a fictional brand of Scotch whisky created by prop company Independent Studio Services. Thought to be a parody of The Macallan, it features prominently in a number of US television shows including Bones, Community, Grey’s Anatomy, and The Shield.

It also makes several appearances throughout Community. Pierce Hawthorne, eager to bond with Jeff Winger (pictured) during a Spanish assignment, insists on sharing a bottle. Sometime after, Winger leaves a bottle of the fine 40-year-old GlenCallan as a bequeathal to Jeff. 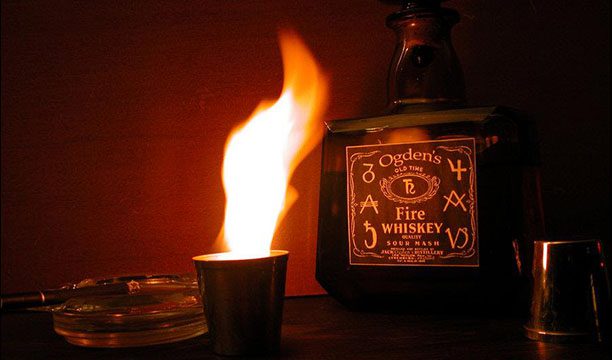 Firewhisky is an alcoholic beverage consumed by wizards and witches in the fictional world of Harry Potter. Some of its most popular brands include Ogden’s Old Firewhisky and Blishen’s Firewhisky.

In Harry Potter and the Half Blood Prince, Romilda Vane gives Harry Potter a box of Chocolate Cauldrons, claiming that they had Firewhisky in them, but they were really laced with a powerful love potion.

Following the death of Professor Alastor Moody in the final book, Harry Potter and his friends raise a toast of Firewhisky in his memory. 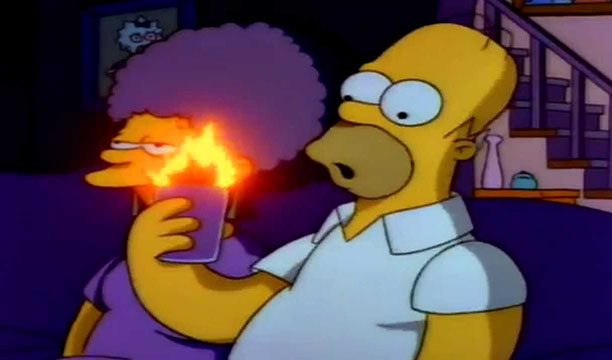 One of the regular characters in classic cartoon The Simpsons, Moe Szyslak, voiced by US actor Hank Azaria, is the proprietor and bartender at Moe’s Tavern, a Springfield bar frequented by Homer Simpson and friends. Homer tells Moe of a secret alcoholic cocktail that includes cough medicine and fire that he calls Flaming Homer.

Moe steals the recipe from Homer, renames the drink the Flaming Moe, and begins selling it at his tavern. The drink is a success and boosts business, but Homer is angry at Moe and seeks revenge. 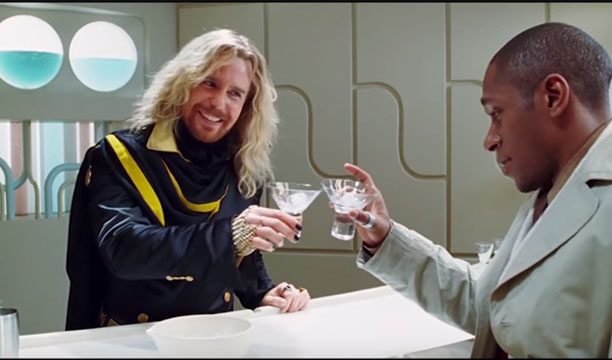 In Douglas Adams’s novel The Hitchhiker’s Guide to the Galaxy, the effect of a Pan Galactic Gargle Blaster is described as “having your brains smashed out by a slice of lemon, wrapped around a large gold brick”. The alcoholic beverage was invented by ex-President of the Universe Zaphod Beeblebrox (portrayed by Sam Rockwell, pictured left), and considered by the Guide to be the “Best Drink in Existence”. It also contains an odd array of fictional ingredients including Ol’ Janx Spirit, water from the seas of Santraginus V, Fallian marsh gas, and a tooth of an Algolian Suntiger to finish it off. 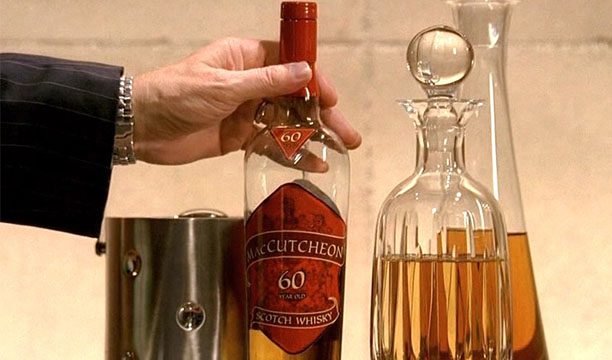 First spotted in popular US drama Lost, the fictional 60-year-old whisky featured prominently throughout the series. Its first outing was in the hands of wealthy industrialist Charles Widmore (played by Alan Dale), who in one scene slept with a bottle of MacCutcheon next to his bed. The whisky also makes an appearance on television shows Fringe and Once Upon a Time. 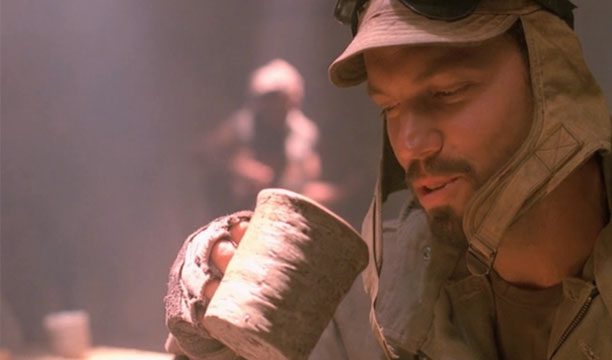 Fans of the cult space western Firefly might have spotted this strange beverage, found in the city of Cangon. It was used on a remote planet called Higgin’s Moon to simultaneously feed the labourers (otherwise known as Mudders as mud was the planet’s only export) and keep them submissive. It is described as providing “all the protein, vitamins and carbs of your grandma’s best turkey dinner, plus 15% alcohol”. 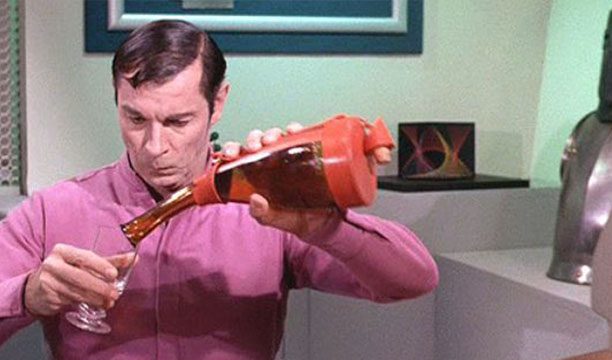 This popular potent beverage was served in a crook-necked bottle and was a favourite among Starfleet crews in sci-fi series Star Trek.

In the episode The Enemy Within, the bestial side of Captain Kirk, created during a transporter accident, demanded a bottle from Dr McCoy. Saurian Brandy was also the favourite drink of Captain Benjamin Sisko.